Consumers are always excited by new things – but what about when something is so new, it’s hard to explain? Here’s how one business has scaled with a totally new concept.

All business owners have their own challenges when it comes to scaling up.

If a business is specialising in something never been done before, winning over customers can be a struggle – more so than if you are doing a new concept of something they already understand.

Pitching new ideas to banks and other investors can be a mixed bag – innovation is great, but investors comfortable in unchartered waters can be hard to come by.

This was the case for Lee Clarke and Greg Gormley, co-founders of Bink, a fintech company removing the need for a plastic loyalty card through a service they’ve called “Payment Linked Loyalty (PLL)”.

Real Business caught up with the pair to find out how they have overcome this issue on their mission to scale up their loyalty card innovation.

The idea is born

Clarke was inspired to create Bink in 2014 while shopping at an airport with his family. He missed out on £300 worth of points in Boots because he had forgotten his loyalty card, and the idea for PLL was born.

“It’s very easy for customers to forget their loyalty cards, but a credit/debit card is something they don’t often leave the house without,” he theorised.

“Therefore, bringing payment and loyalty cards together in a seamless environment made complete sense; benefitting both the customer and the retailer.”

The pair have since secured partnerships with Iceland, Morrisons, Hertz and the Arcadia Group and have raised over £10m in seed funding. They have recently opened a London office and a San Francisco office as part of an international expansion plan. But how have they achieved such success for a new concept, over a short time?

Putting the wheels in motion

“With Bink, we were launching something that has never done before, so we needed to take people on a journey with us and explain our proposition from a blank slate. Demonstrating the strength of our proposition to established companies under these circumstances was undeniably daunting,” said Clarke.

In the early days, the business was privately funded, and later it raised £10m in three tranches through various networks for its loyalty card.

Because they were pitching a “blank slate” preparation was absolutely key – it can be hard to explain a totally new concept succinctly without confusing or losing your audience.

Clarke believes if you cannot explain your idea clearly in 30 seconds, you need to hone your elevator pitch.

Because funding can be hard to come by, many business owners may be tempted to say yes to the first offer that comes along, but that is not always the best idea.

“You have to be careful who you allow to join your share register and what type of potential restriction they want to put on your business,” explained Gormley.

“We have had several offers of proposed investment that we have politely declined due to the associated ties they wanted with the money. Always look to control your own destiny to the point that you don’t regret accepting investment at some point in the future.”

The future is bright

Bink has risen to the challenge of persuading people of the practicalities of its PLL service, and an international scale-up is now well underway. The pair have big ambitions of revolutionising the way people shop, and of publishing hyper-personalised offers.

“We will soon be closing our Series A funding round, which has already generated a lot of interest. This will enable us to grow Bink as a global brand by entering new markets regularly and expanding overseas – all from the simple idea I had a couple of years ago. This really excites the team and myself for the future.” 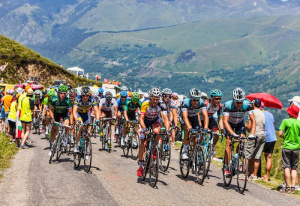