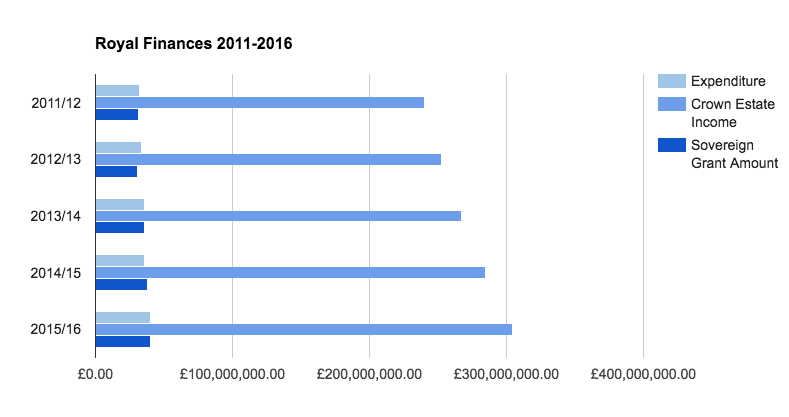 Share via
The Royal Family makes its money through The Crown Estate – a mixture of managed assets, investments, developments and property that’s now worth a huge £12bn. Thanks to its performance, far from being a drain on the UK, the Royal Family is actually a considerable net contributor – adding £304.1m to the Treasury in 2015 alone. This contribution has risen by more than a quarter in five years and was up 4.5 per cent last year compared to the 12 months previous. This number matters because it affects the value of the Sovereign Grant; the figure given to the Royal Family each year in return by the taxpayer.

Since 2012 it’s been set at 15 per cent of the total net contribution made by The Crown Estate two years earlier. That meant that last year’s grant totalled £40.1m – a little over 1p per week for every man, woman and child living in the UK.

However it’s good to see The Queen setting an example and living within her means. In 2015 she underspent her grant by £300,000 – with expenditure totalling £39.8m. Like many businesses, payroll (36.31per cent) was the biggest single cost. Close behind was property maintenance (30.35 per cent), as the age of many royal properties makes repairs and restoration a full-time job. Costs in this area rose by £4.6m in one year, to more than £16m. Read more about the impact of the Royal Family: Travel costs accounted for more than seven per cent, a little over £4m, however this figure was cut by 21 per cent, or £1m, compared to the year before. Her Majesty is also increasingly being known as the “green Queen”, with her total carbon footprint dropping by nine per cent. Assuming the 15 per cent figure remains in place, next year’s grant is set to be more than £42m, and even higher again the year after that. However the Sovereign Grant gets reviewed by government and royal officials every five years, and is up for consideration again this autumn, at which point the percentage figure could change. The amount The Queen receives has risen by more than a third in five years, thanks to the Estate’s strong business performance. However its financial success could leave Her Majesty worse off from 2017 onwards, in percentage terms at least.  Whether that is the right or wrong outcome depends on your point of view, but what can’t be argued is that The Royal Family is definitely paying its way. Alastair Campbell is founder of Company Check. After the Queen celebrated her 90th birthday with an Instagram video debut with Prince Harry, here’s a look at what Britain’s most famous family can teach us about building a business’ reputation online.