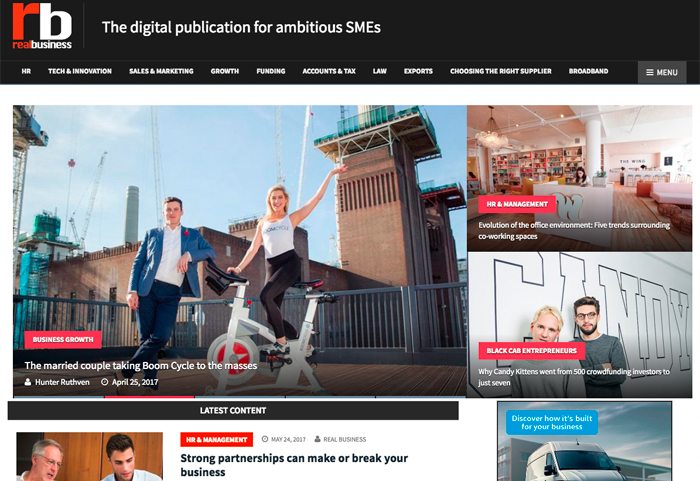 Share via
Alongside its annual audit, carried out by independent body the Audit Bureau of Circulation (ABC), the Real Business figurehead event, the Amazon Growing Business Awards, was named Best Awards by a Publisher at the inaugural Awards Awards. First launched in 1999 by Caspian Media, Real Business was the first magazine for British entrepreneurs and has maintained its steadfast commitment to the SME community. Over the years it has featured renowned business builders from all walks of life?and set the agenda for reform and evolution in the mid-market space. Since 2014, Real Business has had its online audience verified by ABC and seen growth each year from 115,000, through 125,00 and 192,000, to its current level of 238,000 unique visitors a month.

Over the last month, the title has once again been the headline digital media partner for The Business Show, a twice yearly event attracting more than 20,000 business builders in search of advice, guidance and inspiration, and held the second instalment of FD Surgery ? a programme bringing together more than 200 FDs and CFOs from fast-growth businesses looking to share their stories and gain practical from others in similar positions. Recent content campaigns undertaken by Real Business include a focus on the problems SMEs have with securing and maintaining a high-speed internet connection, shining a light on the regional disparity that exists, and a look at how to select the right supplier ? whether it is for gas, electricity, phone lines or other digital infrastructure. Hunter Ruthven, editor of Real Business, said: ?I?m very proud that we?ve continued to deliver digital content of value to the British SME community. The increase in our online traffic shows that not only is there a growing population of ambitious and successful entrepreneurs out there, but they are hungry for advice and inspiration from their peer group. ?As companies move through another general election, the uncertainty of Brexit and encounter complicated policy changes such as GDPR and business rates revaluations, Real Business will continue to produce original and thought-provoking content to help with this journey.?