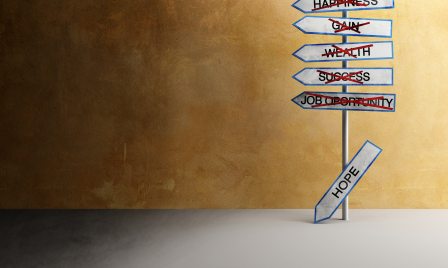 According to a new ADP survey of over 2,500 workers, the struggling economy has left workers pessimistic about their prospects in the following ten years.

One in five workers admit their feelings about work have changed in the past year alone, mainly as a result of the economic slowdown. Worries about having the skills to compete in a global workforce paint a picture of a workforce teetering on the edge of a motivational cliff.

Most workers, including 16-24 year-olds, feel bleak about the oncoming years. Pessimism is highest in both the public sector and large organisations (46 per cent), in healthcare, education and the manufacturing sectors (45 per cent), as well as among manual and unskilled workers (50 per cent).

Fears over job security, along with a lack of prospects or job progression appear to be a problem. Nearly half of workers believe they will be in the same job at the same organisation in ten years’ time.

Only 12 per cent of all workers described themselves as hopeful about the next ten years. Those in arts and culture prove the most optimistic and those in education the least.

ADP also asked what motivated people at work. Worryingly, nine per cent of 45-54 year-olds and 43 per cent of unskilled and manual workers feel they cannot be motivated by anything.

Don McGuire, managing director at ADP commented: “It’s little surprise that employees have been affected by the economic downturn and are worried about the impact of globalisation on their jobs, but the extent of the pessimism and its spread across age groups and industries is shocking and will cause worry to many organisations.

Fostering a highly engaged and motivated workforce is a key priority for all organisations, but the research suggests workers are worried about their prospects and how their skills stack up against global competition. Organisations and their HR teams need to address these concerns with a targeted engagement strategy and clear communications if they are to maintain and foster a motivated workforce.”