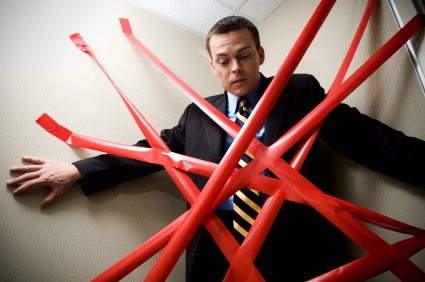 Regulations in the Financial Services (FS) sector are preventing UK companies from growing their business and leaving them vulnerable to new market entrants, according to research from transformation consultancy Moorhouse.

The UK FS industry is struggling with the pace and volume of change driven by new regulation and increasing legislation, so the survey of 130 senior executives and board-level directors in the UK FS industry reveals. It found that 88 per cent of respondents feel regulatory change is preventing their organisation from addressing other urgent business priorities. Three quarters of those surveyed felt their organisation would have to change its business model in order to thrive over the next three to five years. The research, ?Too much change? Financial Services Survey 2012?, finds that FS organisations are undertaking an average of 21 major transformation projects at any one time, with an average of 41 per cent of these driven by regulation. FS organisations are left unable to focus on growing their business and responding to the changing market; specifically, respondents singled out cost reduction, business improvement, growth and innovation being sacrificed as resources are focused on meeting the needs of regulatory demands. Richard Goold, executive director at Moorhouse and head of its FS sector, commented: ?The financial services sector is at breaking point. While there is no doubting the need to tighten the rules governing the industry, the tidal wave of legislation facing organisations is more than they can cope with. They are effectively paralysed; struggling to meet regulatory requirements to avoid fines or penalties, unable to further develop their business and failing to deliver the best service or function. ?As a result, the UK financial services industry is losing its competitive edge and opening itself up to competition from overseas organisations that are less burdened by regulation, and new market entrants who can more efficiently undertake smaller parts of the traditional functions of larger FS organisations.? The problem is compounded by the overlapping and piecemeal nature of much of the regulation, especially for organisations operating globally, which are facing legislation from multiple governments. Almost all (94 per cent) of the senior level FS respondents in the survey felt that the overall regulatory agenda has not been fully thought-through or is consistent. As a result, just over half (51 per cent) of organisations admit to inefficient and wasteful duplication of activity across departments in rolling out new programmes and change. The sums invested in regulatory change programmes are huge; but the expected benefits are hardly tracked. With an average programme investment in the research of ?31m, this equates to some ?1.4bn on unmeasured spend. The research identifies that almost a quarter of FS business leaders feel the guidance provided by regulating bodies is ?completely inadequate?, and over two thirds (70 per cent) feel the increase in regulation is forcing them to consider their operations globally.