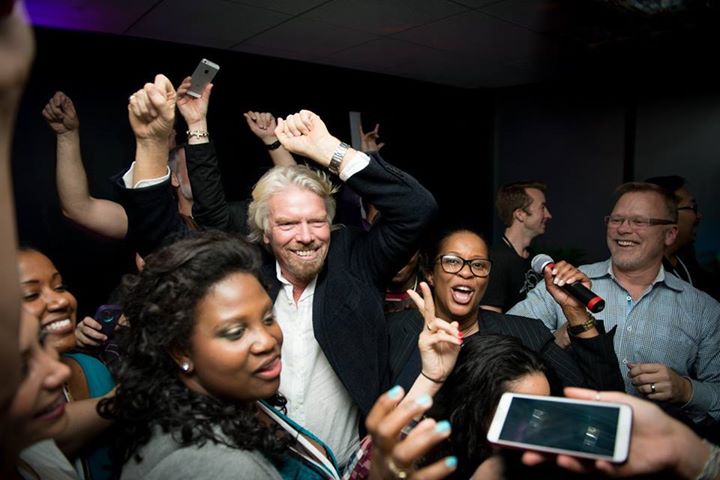 Share via
He’s recently been busy encouraging business entrepreneurs to enter his ?1m Pitch to Rich competition, but Branson would have another job on his hands if the British public had their way. Indeed, some 36 per cent of Brits fancy Branson as the business person best suited to take over from Conservative leader David Cameron. The Virgin boss was by far and away the dominant choice, according to the study from small business lender Everline, which found Alan Sugar in second place with just 16 per cent of public favour. The appetite for an entrepreneur to step into the shoes of Cameron comes as?a survey of UK small businesses has shown that over 90 per cent of business owners will use their vote on Thursday, which is up from just 65 per cent in 2010. Dragons’ Den’s Deborah Meaden came in joint third with West Ham United’s vice chairman Karren Brady at five per cent apiece, making them leaders in the stakes for a female leader. Meaden secured more favour among voters aged 18-24 and moved up to nine per cent, while Branson fell to 21 per cent but still came out on top. It’s likely a result as younger audiences having more awareness and access to a wider selection of celebrity entrepreneurs.

Elsewhere, four per cent of Brits overall would like to see celebrity chef Jamie Oliver take up residency at number 10. This could be a result of his continued campaigning for food education, which resulted in the government agreeing to making the subject compulsory in schools.

Oliver commented on his food mission in an interview with Time Out in April, and said:
?I believe it?s a child?s right. I haven?t met anyone yet who thinks it?s a bad idea to teach kids about food. Only an arsehole ? and a dumb one at that ? would think it wasn?t a great idea.? Adding whether full-time politics is for him, the celebrity chef added: ?I don?t know, really. I genuinely feel like my boss is the public, which sounds a bit weird but it?s just the reality of how I feel about my job. But I feel like I can be more dynamic on the outside. Also, the minute you go, ‘Mate, I?ll have a go at being mayor!’, everyone?ll go, ‘You !@*!’ Ultimately, I don?t think I?m worthy of a political position.? Still, while Oliver has considered himself unworthy, Facebook chief Mark Zuckerberg and Simon Cowell secured some three per cent of votes each. Perhaps seeing them in power could result in status-based voting on policies being changed through the power of song? Similar to Meaden, Cowell also secured more votes from a younger audience, rising to seven per cent for 25-34 year olds. Meanwhile, David Beckham secure two per cent of the vote, followed by Ultimo founder Michelle Mone, who ties with Joey Essex from TOWIE ? a programme known for producing entrepreneurs. And while the often vacant Essex may seem like an odd choice, he’s been interviewing the likes of Ed Miliband and Nick Clegg ahead of the general election ? possibly in a bid to pick their brains in order to seize power in the future. Russell Gould, COO of Everline, said: ?The business success, ambition and charisma of Richard Branson, Alan Sugar and Deborah Meaden make them great choices to lead the country. Yet, there is a distinct lack of equally aspirational younger business leaders to inspire the next generation of entrepreneurs. ?We hope that the new government will do more to help small businesses get the support they need to grow, including access to advice and different finance options. This will help pave the way for the next generation of Richard Branson’s to inspire people to start their own business and propel the UK?s economic growth.? By Zen Terrelonge