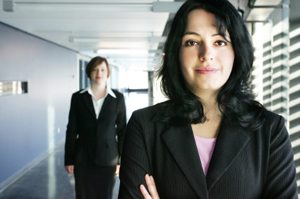 Women?s risk averse attitude often holds them back from making it big in business, according to Women Outside the Box research. The fact that 43 per cent of women thought that ?throwing in your job to take a trip of a lifetime? was risky behaviour compared to 21 per cent of men highlights the differences between the genders when it comes to their self-belief, before they even got off the starting blocks of building a business.

When it came to business risk, women seemed less willing to invest to the hilt. For example, while 34 per cent of men wouldn?t think twice about re-mortgaging their house to fund their business plans, only 17 per cent of women said they were prepared to do so. Men were also more willing to invest in taking on the staff they needed to grow their business quickly, with 68 per cent saying they?d invest in taking people on to ensure their business reached its full potential. By contrast, only 25 per cent of female business owners are willing to invest in employing people, held back by the fear that they might not succeed. Women Outside the Box founder, Joni Farthing, said: ?The research findings show that women are still holding back when it comes to thinking big, taking a chance and really going for it. Sadly, this is what often keeps women?s business small and stops so many intelligent, driven women with great business ideas from the success they are more than capable of achieving. We need to encourage women to adopt a ?She Who Dares? attitude and fulfil their true potential.? The research also found that how women perceive themselves may go some way to explaining their behaviour when it comes to taking risks. While 21 per cent of men said they would consider themselves ?serial entrepreneurs? just eight per cent of women said the same. ?In reality, I suspect many of the women surveyed who didn?t see themselves as ?serial entrepreneurs? could have given the 21 per cent of men who did, a run for their money in terms of their business track record! However, it comes down to perception. Perhaps women just don?t feel comfortable describing themselves in that way and this in turn relates back to how women view their successes and failures in business”, added Farthing. One of the keynote speakers at the WOTB festival, Sue Tugman, states that women are good at taking their time and weighing up the pros and cons of a particular deal or investment, which shouldn?t be undervalued. However, it?s an inevitable part of business life that sometimes to get ahead you have to be prepared to take a risk and really go for it. By Shan? Schutte