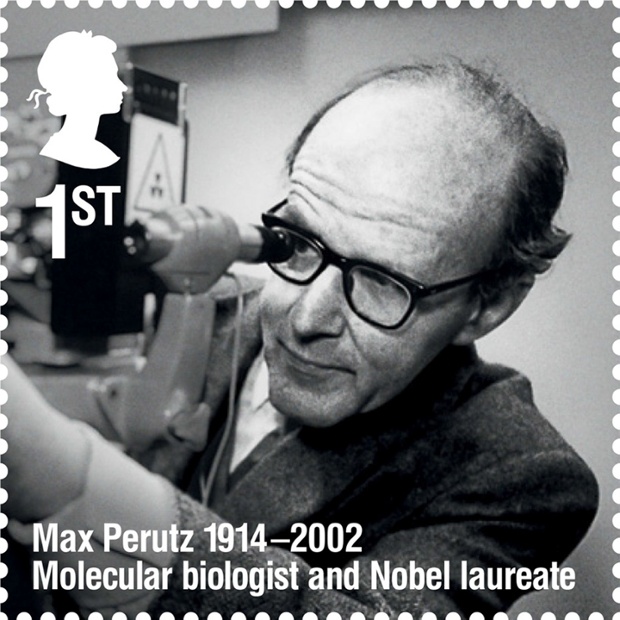 Francis Roy Plomley was an English radio broadcaster, producer, playwright and novelist. Although he aim was to be an actor, he soon drifted into broadcasting, coming to public notice as an announcer, and later producer, for the International Broadcasting Company (IBC). In 1941, he devised the BBC Radio series Desert Island Discs, for which he presented 1,791 editions spanning over 43 years. He was also the chairman of BBC Radio’s game show ‘Many a Slip’, and anchored Round Britain Quiz in 1961. Plomley produced ‘Dinner Date with Death’ in 1949, claimed to be the first UK film made for TV, and wrote the screenplay for the 1953 film ‘The Blakes Slept Here’.

Max Ferdinand Perutz was a molecular biologist, who shared the 1962 Nobel Prize for Chemistry with John Kendrew for studying the structures of hemoglobin and globular proteins. During World War Two he worked on Project Habakkuk, a secret project to build an ice platform in mid-Atlantic, which could be used to refuel aeroplanes. Perutz also won the Royal Medal of the Royal Society in 1971 and the Copley Medal in 1979. He founded and chaired The Medical Research Council Laboratory of Molecular Biology. In his later years, Perutz was a regular writer for The New York Review of Books on biomedical subjects.

Noor-un-Nisa Inayat Khan was an Allied SOE agent during the Second World War who was awarded the George Cross. In November 1940, Khan joined the Women’s Auxiliary Air Force (WAAF) and, as an aircraft-woman second Class, was sent to be trained as a wireless operator. After being promoted Assistant Section Officer, Khan was recruited to join F Section of the Special Operations Executive. She became the first female radio operator to be sent from Britain into occupied France to aid the French Resistance, becoming the most wanted British agent in Paris.

Barbara Mary Ward was a British economist and writer who urged Western governments to share their prosperity with the rest of the world. After working for the Ministry of Information during World War Two, she was offered a job at the Economist. She left in 1950 after becoming foreign editor. She was also president of the Catholic Women’s League and in 1946 she became a governor of the BBC and of the Old Vic theatre. Ward helped set up a pontifical commission for justice and peace, and in 1971 was the first woman ever to address a synod of Roman Catholic bishops.

Kenneth Gilbert More was an English film and stage actor. His biggest hits include ‘Raising a Riot’, ‘Reach for the Sky’ and ‘The Admirable Crichton’. It during the role of Freddie in Terence Rattigan’s 1952 play ‘The Deep Blue Sea’, that More gained stardom. The stage and film actor is considered one of the British cinema greats and was one of the nation’s most popular stars throughout the 1950s. By Shan? Schutte