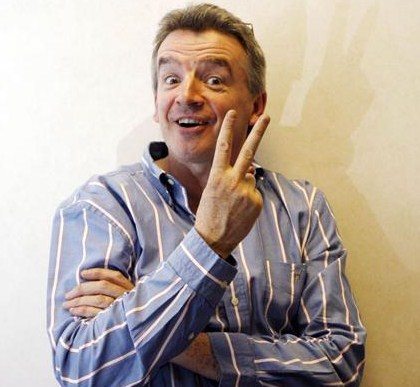 She wrote: “You never hear anybody casually mention that they have just flown with Ryanair and that they really enjoyed it. I’m willing to bet my flat and its contents that nobody has ever said the words ‘Ryanair’, ‘marvellous’ and ‘service’ in the same sentence.” But Ryanair’s controversial tongue-in-cheek CEO Michael O’Leary has struck back, taking her up on the wager by seeking possession of her flat. “Ryanair is now seeking possession of the ‘flat and contents’ of Telegraph journalist Bryony Gordon since her claims that Ryanair passengers have never complimented our industry leading service are clearly false,” the airline said. “Unfortunately for Gordon, she overlooked the fact that Ryanair is the world’s favourite airline and provides the best on-time, baggage and flight completion performance of any major European airline, while also offering Europe’s guaranteed lowest fares. “We look forward to receiving the key’s to Gordon’s ‘flat and contents’ in due course.” We assume – and hope – that O’Leary is just being tongue-in-cheek, although we wouldn’t be surprised if he actually did call her out on the wager (the airline has actually already sent her a letter with its demands). Despite admitting to have been “Ryanaired” by this PR stunt, Gordon remains upbeat as technically, none of Ryanair’s published positive feedback from passengers do contain the words “Ryanair”, “marvellous” and “service” in the same sentence. So she can keep her flat for now! Ryanair’s draconian cost-saving measures have made the news in the past, with, for example, plans to charge passengers to use the loos. But as the Telegraph journalist points out, despite people’s often-unenjoyable experience of flying with Ryanair, the airline continues to attract more and more customers. Year on year figures show that traffic increased by 13 per cent in March, with the airline carrying just over 66m passengers per year (“gluttons for punishment”, Gordon calls them).