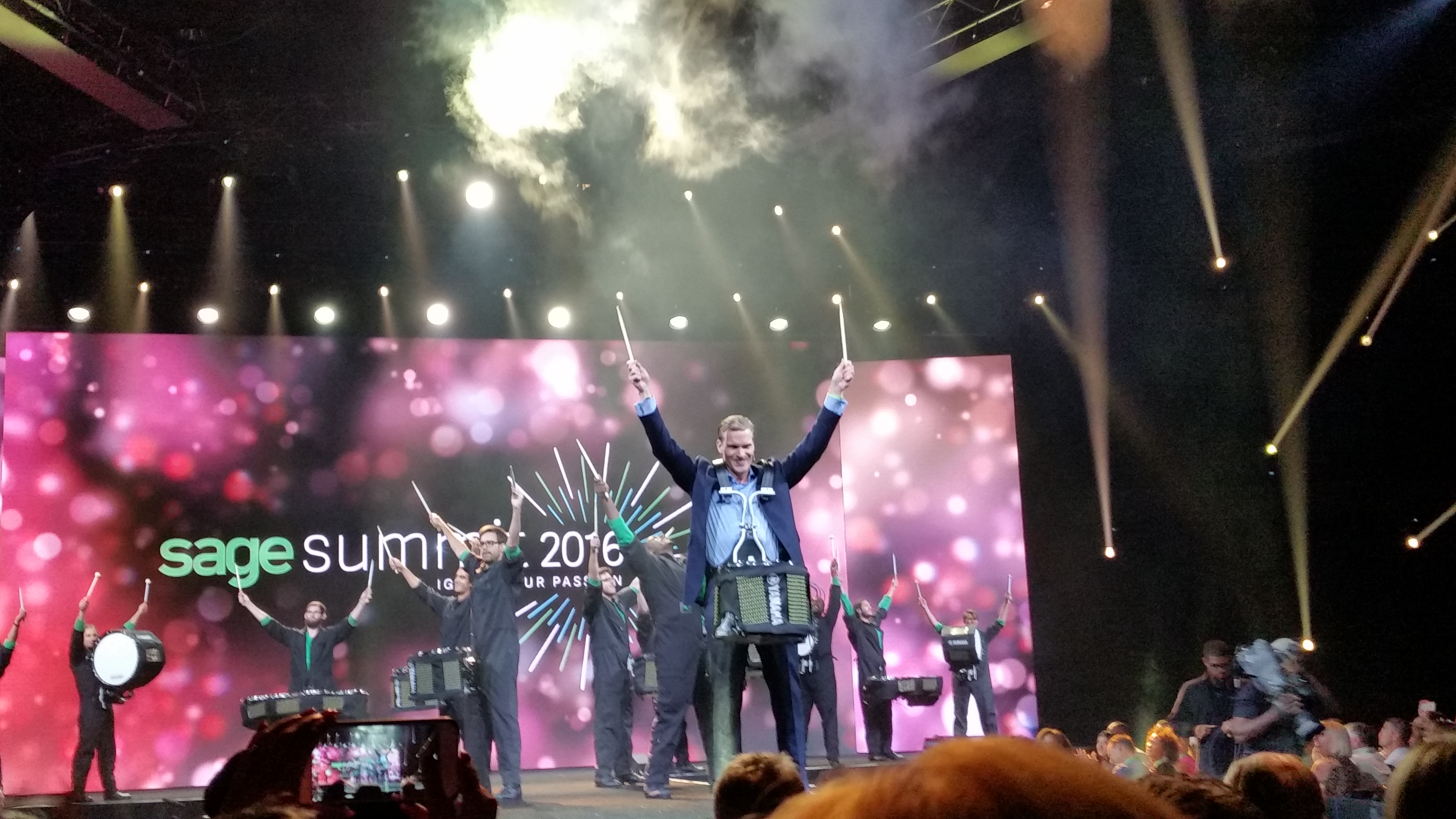 The message during day one of the Sage Summit was that partnerships with SMEs are hugely important for Sage to thrive, but mutually beneficial, while it’s prepared to go to battle with any competitors that try to cross its path. Collaboration and disruption are the musts – do or die.

And for day two on Tuesday 26 July, as part of his keynote opener before going on to quiz Richard Branson, Stephen Kelly discussed inspiration – for the Sage boss, his father was his hero. First though, here’s how Kelly decided to make an entrance before delivering us that walk down memory lane.

When your boss is in a good mood and says you can play music in the office ud83cudfb6 #SageSummit @SKellyCEO @sageuk pic.twitter.com/7qwhmjhWVZ

“He invested life savings in a dream and made it a reality, it was a tea shop – a very local business. Started when he returned from war in 1946, he worked every day from the crack of dawn and he did it to provide for his family,” he recalled.  “He worked long hours, he made sacrifices to follow his dream, just like so many of you. You could find me at the shop every day after school, learning the value of hard work. After 30 years of love and service and joy, they [his parents] sold their business.” Kelly described the cause of entrepreneurship a noble one and said those early lessons from his dad are what inspire him on a daily basis, which is good for businesses everywhere, since he is adamant Sage will “delight customers and grow our businesses”. Interestingly, Branson, the man often hailed as an inspiration, also named a parent as his guiding light. “My mum was somebody that was struggling, as a lot of entrepreneurs in this room have done, to make ends meet. She started little businesses and failed, but she tried – tried to supplement the money my dad was making from being a struggling barrister. I learnt a lot from her struggles, and, as we do, you love your mum and she was somebody I looked up to,” he said.

On the innovation front, with Sage determined to wholeheartedly embrace disruption for the improvement of the business, the firm demonstrated where the Internet of Things can slot into the world of finance. In an offbeat presentation that was part live (prerecorded) video, part stage showcase, Kelly and executive vice president of product marketing Jennifer Warawa revealed IoT developments that, in an ideal world, will make finance less of a burden as connected items will do the legwork without human interference. One example was a connected car’s ability to sync to Sage in real-time, with mileage amount automatically tracked so that the expenses can be calculated in an instant. And speaking of instant, instant messaging isn’t just something Facebook took a fancy to when it bought WhatsApp for $19bn. The very informal IM market can indeed now be used to calculate payments, as mobile product director Kriti Sharma unleashed Pegg upon the audience. A rather cute emoji-looking creation, Pegg is a form of AI that can analyse your finances in an immediate and conversational format. Facebook Messenger is the platform Sharma chose to showcase Pegg on, while a partnership with Slack was announced during the demo. “They [Slack] share our vision at Sage for running businesses through conversation and use of language you use every day through your messenger, and together we’re going to transform the experience you have in your businesses to make it so much easier,” said Kelly. Sharma added the goal was to create a conversational office.

Amidst all of the A-list names on the roster talking business and tech, however, an unexpected guest showed up to bring politics into the fold – newly appointed international trade minister Liam Fox. That’s right, having seized power from the clutches of David Cameron to become prime minister, the only female to hold the top job since Margaret Thatcher, Theresa May has issued a reshuffle of staff in Parliament, which saw Fox promoted to manage foreign business alliances. After all, “Brexit means Brexit and we’re going to make a success of it,” according to May. An audience assembled in the press area to hear Fox echo his boss’ sentiments as the UK gets the wheels in motion to leave the European Union.  “Sage’s story is nothing short of inspirational. Beginning as a startup 30 years ago, it now has 14,000 employees serving millions of businesses across 23 countries. Employees in over 50 per cent of UK businesses get paid with Sage,” he opened with. Of course, that was a nice segue for him to begin talking about international endeavours. The US will be a key area of focus for the government, with three new offices to open in America. “The UK is open for business like never before. A vote to leave EU and change in government means opportunity to make Britain a truly global nation,” Fox said. “Sage employs 2,000 people across the US and over 55,000 people go to work for British companies in Illinois. Open trade is about countries coming together to set conditions to enrich cultures and spread prosperity. We want the UK and US to lead the world as shining beacons of open trade.” Fox reckons abandoning the EU will offer UK control to set terms globally, slicing red tape and shaping the future, while he added he’s been negotiating with overseas counterparts to make the country “match-fit”. “I’m pleased to announced UK government plans to open three new offices in the United States, in Minneapolis, Raleigh and San Diego, renowned for their economic productivity. These three cities offer exciting opportunities to boost trade and investment. Each office will work to promote UK business, economic and political ties,” he said.  Backing up his claim, he noted the Seattle government office has support £8m of capital investment and 1,000 UK jobs in the past year alone. He made a swift exit after his speech and said he was heading to Los Angeles, where he’ll continue his work to ensure the special relationship stays intact.  By Zen Terrelonge

Here’s what happened during day one of the Sage Summit –  collaborate and disrupt to become Braveheart of business.