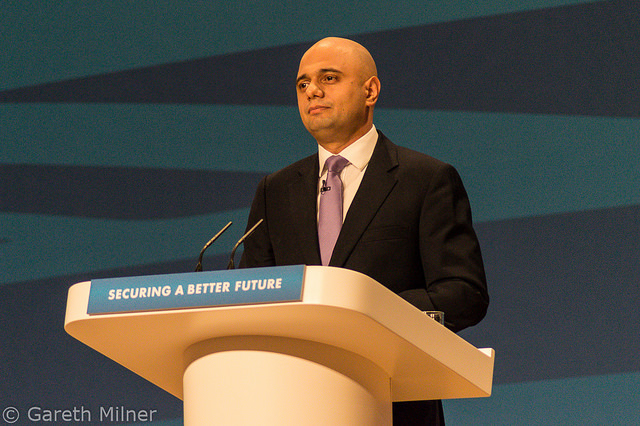 Speaking at the Engine Shed business centre, Javid set out the government’s plans to help make Britain the best place in Europe to start and grow a business. He added the highly personal touch of talking about the shop his family had owned on Stapleton Road, above which they slept, to make a point.

Javid said his parents came to the UK from Pakistan in 1964 “with dreams of a better life?. Before coming to own a clothes shop, Javid noted that his father not only worked in a cotton mill, but also drove buses and ran a clothing stall at the local market. His mother made clothes for said stall.  He admitted that it’s where he gained his deep knowledge of ladies clothing, suggesting that he was certain no other male MP knew more about womenswear than he did. Essentially, however, the shop was the ?soul of [his] family?. As it was a 24/7 concern, they all ?mucked in?. He claimed to have helped his father, aged ten, with customers. ?It instilled in me an unwavering belief in enterprise, opportunity and reward for hard work,? he said. ?Above all, I know what it’s like to run a small business.? According to Javid, this is why he wants to help small businesses, branding them the “engine room” of British industry, and vowing to get “heavy handed” regulators off their backs. The speech, designed to outline the scale of Javid’s ambition in the area, reviewed a number of sectors set to be established in order to come up with regulations which might be cut. Javid certainly seems to be tackling his new with gusto as it was just last week that he suggested taking “a fresh look at deregulation”. Now he’s promising to slash red tape, currently costing businesses ?10bn a year, by 2020.  Read about government-related news: “As part of our long-term economic plan, we will sweep away burdensome red tape, get heavy handed regulators off firms? backs and create a Small Business Conciliation Service to help resolve disputes,” Javid said. These plans are part of the Enterprise Bill. ?As business secretary I will always back them and, in my determination to get the job done, one of my first steps will be to bring forward an Enterprise Bill that helps them to succeed and create jobs,” he said. His love of Star Trek was alluded to when he explained that he’s pitched for it to be called the Starship Enterprise Bill. He added that the prime minister had not been convinced. Javid also noted that it would help employers create two million additional jobs, as their growth wouldn’t be obstructed by disproportionate industrial action.  He also suggested that there would be “less of the stuff that sometimes invites utter derision”. There would be no more slaps on the wrist for no smoking signs in the wrong size or in the wrong place and if you leave your sandwich on the bus, the bus company no longer needs to hold on to it for 48 hours before putting it in the bin. “Come Christmas, you can buy a box of crackers without having achieved the age of consent,” he said. The latter point was something initially raised by Real Business’s City Grump in December 2014. During an office party, which seemingly involved several party crackers, the City Grump reveals how he pulled his cracker, read the joke, but was astonished by what was written at the back. It read: ?WARNING. Children under 8 years old can choke or suffocate on uninflated or broken whoopee cushion. Adult supervision required. Keep uninflated whoopee cushion from children. Discard broken whoopee cushion at once. MADE OF NATURAL LATEX RUBBER.? After taking to Google, he unearthed the European Union Toy Safety Directive as the “source of this Christmas story”. Even whistle blowers, the City Grump suggested, were now deemed unsafe for all children under 14.  Javid is of the opinion that European regulation needs to be tackled head on as it was in the UK’s best interest to “reduce needless burdens on business” ensuring that Britain implemented EU law in a way that wouldn’t put UK businesses at a competitive disadvantage. By Shan? Schutte