Skip to content
Managing Your Cash Flow
Share via
According to a Beauhurst report entitled The Deal, both platforms enabled more transactions than other UK investors between January and December 2016. Their portfolios were also seen to be more diverse. “Crowdcube was the top-ranked platform by the amount of investment facilitated, whilst Seedrs participated in more deals,” Beauhurst said. That same year, Seedrs hailed itself the champion of Benelux startups after gaining a passport from the FCA to do business anywhere in the EU. Crowdcube, on the other hand, made clear its intentions to create a secondary liquidity market. With both?equity platforms labelled creme of the crop, which one would you entrust your business to?

A company that has walked both paths

David Kramaley is Chessable’s co-founder, CEO and chief scientist ? and he’s seen what happens on either side of the fence. In fact, he wrote a blog about it,?saying that even after much research, Seedrs and Crowdcube looked equally as good. “Seedrs just edged out Crowdcube because we thought the ‘nominee’ structure was a nice little perk for investors,”?Kramaley said. After only one day of being ‘live’ on Seedrs though, Kramaley realised he had made the wrong choice. “We worked hard to be able to swap crowdfunding platforms, and we were able to do so successfully and very quickly. “I?d like to say that on Crowdcube we will be able to give back more to our supporters and investors. The Crowdcube ‘reward’ structure allows for this.”

Doorbell solution Ding, for example, raves about Seedrs, having also weighed the two platforms before making a choice. Founder?John Nussey revealed:?”Seedrs was the best choice in the end as the type of campaigns they run were more relevant to Ding ? and they are listed as a single shareholder rather than each individual investor being listed. “We had an amazing response from the Seedrs community, people have been really engaged and given us some amazing feedback to inform how we move forward with the company.” On the contrary, Kramaley highlighted the different structures equity crowdfunding platforms utilise ? and Seedrs and Crowdcube happen to be known for a different one each.

What is a nominee structure or reward system?

This structure has allowed companies on Seedrs to garner much success. Type nominee into Google and Seedrs pops up everywhere.

Essentially, investors get the benefits of their shares. However, Seedrs?administers the shares as a nominee and has each company sign a standard subscription agreement.

According to Seedrs: “A nominee arrangement is where the nominee holds legal title to the shares for the benefit of another person. “The effect of this structure is that while Seedrs holds the shares, the full economic interest in them ? including the benefits of individual tax reliefs such as SEIS and EIS ? are passed through to the underlying investors.” 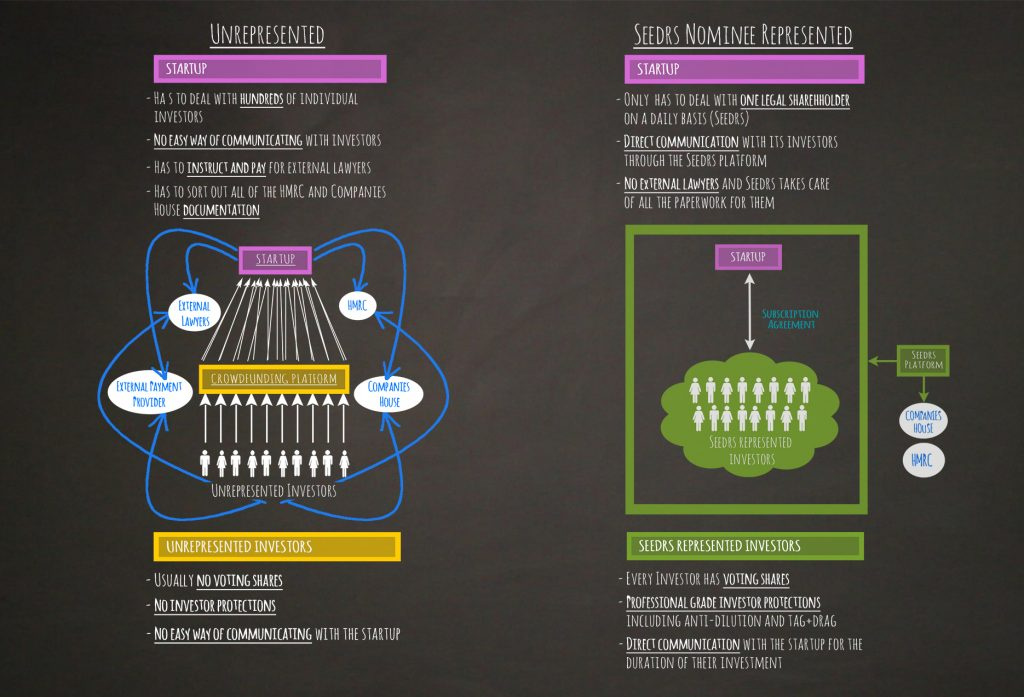 Entrepreneurs can still reach out to investors for advice on Seedrs, but only need to report to and receive consent from Seedrs ? not their entire investor base. Investors also receive protections provided in the subscription agreement.

The way an investor holds assets on Crowdcube is different. According to Seyfarth Shaw associate Georgia Quinn:?”Under the Crowdcube model, the investor simply holds a direct equity interest in the operating company subject to the rights and risks of any other minority investor.” It means companies can have up to a few hundred direct shareholders they need to manage.

But Crowdcube is arguably better known for not only being an equity platform ? it also runs a reward-based structure.

When it comes to this form of crowdfunding, interested parties can gain a non-financial reward in return for their investment, such as goods or services.

With the help of statistics

Structures aside, how much investment you can receive, as well as the fee for success, can contribute to platform choice. This table from?Business Agent?highlights the fees and charges you’ll occur on Seedrs or Crowdcube: It also showcases the amount raised on each platform:

The statistics show that Crowdcube wears the equity crowdfunding crown ? especially when it comes down to the amount of finance raised.?However, Seedrs is close behind. It’s tricky to decide which platform to choose as it really comes down to community preference and type of business. Both have pros and cons depending on who you ask. But hopefully, the above statistics and different structure can help you decide which route to take.

[…] According to a Beauhurst report entitled The Deal, both platforms enabled more transactions than other UK investors between January and December 2016.Their portfolios were also seen to be more diverse. ?Crowdcube was the top-ranked platform by the amount of investment facilitated, whilst Seedrs participated in more deals,? Beauhurst said. https://realbusiness.co.uk/seedrs-crowdcube-equity-crowdfunding/ […]