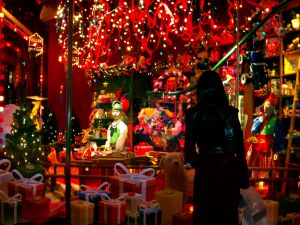 More than half of Brits will be doing most of their festive purchasing online, with nearly a quarter prepared to spend ?200 to ?300 on presents, and 87 per cent will be getting their Christmas food from a supermarket instead of local retailers.

The Liberis survey reveals that although respondents understood the importance of buying locally, there was a 50/50 split in the amount of people who are going to make a conscious effort to do so next year. The majority say they are happy with their current shopping arrangements and almost a third state that there isn?t enough choice in local stores. Another barrier to local shopping was price. Some 60 per cent of shoppers interviewed believe that they pay a premium charge when shopping locally which over half felt was unfair/unjustifiable. Liberis CEO, Paul Mildenstein said: ?It?s seems that people want to support local shops, but sadly when it comes to it, it?s too easy not to. Unfortunately unless shoppers make the shift with their feet and wallets, then we shall continue to see small businesses close on our high streets.? A shocking 80 per cent said that the face of their local high street had changed over the past five years, with 76 per cent believing it was due to local businesses closing down and 58 per cent saying there had been an increase in vacant properties left unfilled.