Salary benchmarking site Emolument.com is behind the survey of professionals, which analysed their job satisfaction. It’s not great news for employers on the whole, as 57 per cent of respondents said no when asked if they love their job, suggesting there is great room for improvement.

Interestingly, women are seven per cent more likely to dislike their role. According to the findings, 62 per cent of females said no to loving their job, compared to 55 per cent of males.

There has been talk of the gender pay gap for some time and it’s suggested that the trend of females receiving lower salaries than men has created a “gender happiness gap”. Emolument pointed that the pay gap in the UK is around 19 per cent, but added female frustrations may also be caused by juggling work with family life.

As for the industries with the workers most satisfied by their roles, those in human resources are the most likely to love their work, as 55 per cent responded with a firm yes. This was followed by 51 per cent of technology & telecoms professionals, 49 per cent of engineers and 48 per cent in sales and the public sector & education alike.

Comparatively, tourism & restaurants, construction & property and logistics are the sectors with the workers least likely to appreciate their job, as 68 per cent said no to loving their work. 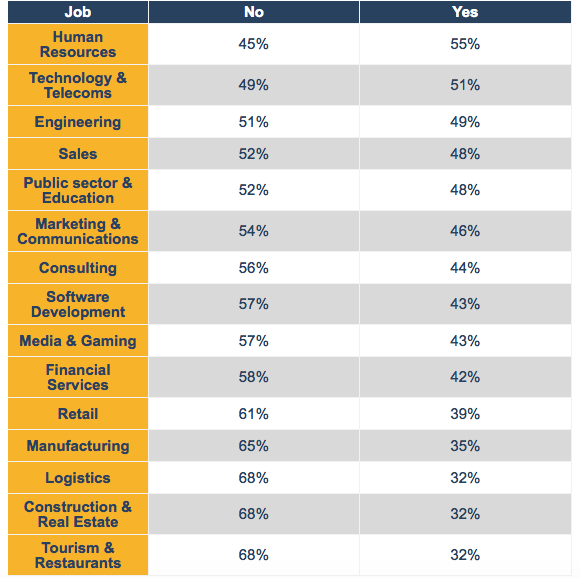 Emolument believes HR professionals are more likely to enjoy their jobs than counterparts in other sectors because of the social interaction it requires. Duties aren’t focused on company growth and finances, but supporting personal growth of peers, which is said to result in lower stress levels.

On the other hand, jobs further down the rankings increase in stressful environments, with demanding customers and problem-solving generating staff frustrations. Interestingly, it would then be down to HR to help resolve problems and discuss them, creating a full circle scenario.

Continue on the next page, which details job satisfaction based on location, employee experience and company size.

Supercharge workforce productivity with a health and wellbeing focus