The last six months have seen a significant fall in local market confidence, according to Sage’s International Business Insights, released earlier this week. Sage asked over 10,800 SMEs across 15 countries to track the changes in business landscape and outlook.

“The Index provides an incredibly accurate picture of how small and medium sized companies are feeling, and that feeling is nervousness”, explained chief executive of The Sage Group, Guy Berruyer.

SMEs’ confidence in their local markets has declined significantly, from an index score of 47.26 to 42.47, falling close to five points in comparison to Sage’s third report which was released in March this year. However, a score of 56.46 feel more optimistic than pessimistic about their own business prospects – a number down on March’s score of 58.86. Real Business took a closer look at the index:

According to the majority of small and medium businesses, the global economy is still in decline. Unsurprisingly, euro zone countries felt most negative about the world’s finance: Portugal registered the lowest score of just 35.36. The only country to report a positive global economic outlook was Brazil, with a score of 50.65.

Business leaders lacked confidence in their local economy. Poland scored a low 38.18, and Spain 31.7, significantly below the 50 mark. Germany and Austria also saw a significant fall, from 52.08 in March to 47.94 today. The UK, however showed a growth in confidence in the local economy, and the score rose half a point to 45.44. Arguably, similar to Britain’s one per cent economic growth, the growth may be the result of the array of successful summer of events.

Outside Europe, the picture was mixed: South Africa has seen a decline from 46.11 in March 2012 to 43.03. However, SMEs in both Brazil and Singapore remain confident their country’s economies are improving, with scores of 59.67 and 53.88 respectively.

There has been a minor decline in business confidence. The survey highlights that whilst this is still in positive territory overall, there has been a slight decline since March 2012. France has fallen from a slightly confident outlook (51 in March 2012)  to a far less confident score of 45.55, perhaps reflecting negative business sentiment towards the government. In Spain, arguably one of the countries worst hit by the euro zone crisis, there has been a significant rise in businesses’ confidence about their own prospects (48.12 up from 45.75 in March 2012).

On a more positive note, Britain registered its highest confidence level since the first Index, with a score of 58.46. Still, this seems low when compared to Brazil’s score of 70.31.

The top challenge for businesses are the rising cost of energy, according to 47 per cent of businesses. Some 31 per cent said their biggest concern is the instability of the local market place. Not far behind, 30 per cent of those asked voted the decrease in consumer confidence a major worry.

Despite these challenges, SMEs are still looking to expand. Some 26 per cent of UK SMEs and 40 per cent of Brazilian firms said they were planning to recruit new employees.

Only six per cent of businesses said they were likely to close or sell their business. However, some 15 per cent said they would look to reduce employee numbers, although this was higher in Portugal with 23 per cent and Ireland with 20 per cent.

Businesses leaders lack confidence in their local and national government. Regardless of the numerous government initiatives implemented across the world, small and medium businesses are clearly not feeling the benefits as yet. Some 67 per cent felt that their national government does not provide sufficient support for their business.

Linked to this finding, Sage reported that 43 per cent of SMEs call for a reduction in bureaucracy, and 36 per cent ask for reduced business tax. Some 31 per cent say more opportunity for skills development would help SMEs grow.

The lack of confidence in the government is a major problem for SMEs and the economy, Berruye explains: “Overall, the findings serve as a strong reminder to governments that more still needs to be done to support small and medium sized companies.”

Opportunities are still out there. Despite the concern that still surrounds governments and economies across the globe, there is undoubtedly a light at the end of the tunnel. 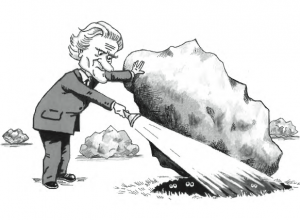