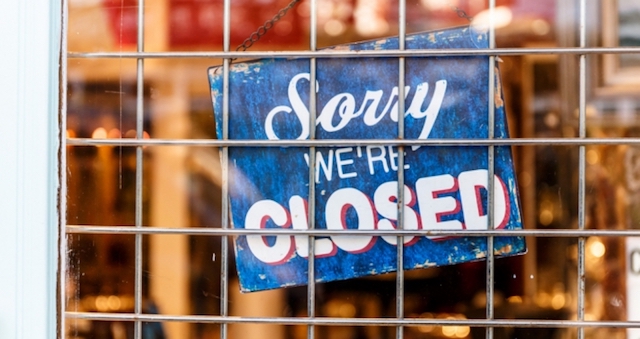 Share via
New research from small business insurance provider Simply Business reveals that 632,889 small-to-medium businesses could be at risk of collapse this year, equating to the closure of 1,700 smaller businesses each day. The research, that took in analysis from government figures spanning five years from 2014-2018 found that the average annual rate of business closures in the UK had risen to 10.8% ?? the highest closure rate since the year following the Global Financial Crisis. During the year 2018-2019, over half a million (508,865) companies were dissolved on Companies House, the highest number since 2009. This major statistic suggests there might be a similar economic catastrophe on its way in 2020. The study reveals that small business confidence matches the worrying performance statistics, and is at an “eight-year low”, with confidence around profitability and exporting in particular at a “five-year low.” With the UK home to 5.82m SMEs, (accounting for over 99% of all businesses in the country and providing a combined turnover 2.2 trillion pounds), the erasure of close to a million smaller businesses would be a blow to an economy that’s already suffering from uncertainties around Brexit, (in the form of operational delays, stalled growth and workforce uncertainty), as well as the spread of coronavirus that’s affecting supply chains and consumer confidence.

With low survival statistics pitted against startups anyway, including the fact that 80% of businesses fail in their first year of operation while less than half of businesses survive their first five years, rising closure rates and declining business confidence is the opposite of what the SME community needs in 2020. However, with a new chancellor in power in the form of the entrepreneurial and economically outward-looking Rishi Sunak, SMEs are hopeful that his Budget will provide financial support to aid in the creation of startups and help existing small businesses grow. Accounting for the majority of the country’s businesses, there’s little doubt that SMEs are the “engine room” of the UK economy. However, if hundreds of thousands go by the wayside this year, the impact won’t just be felt at a macro level. Alan Thomas, UK CEO of Simply Business comments on the social as well as the economic impact the erasure of smaller businesses could have on the communities that work for them as well as those that buy their products and services: ?Small businesses provide vital services and jobs in our communities. They are the heartbeat of our economy, contributing over ?2 trillion annually. Evidence that over half a million small businesses might close this year should cause alarm. Loss on this scale would represent a substantial blow to the UK financially, as well as to community life up and down the country. “In terms of stimulating an entrepreneurial environment where people feel confident about starting a business, these statistics won’t help. Uncertainty and lack of confidence are the main barriers to SME survival and growth in the UK today, while budding entrepreneurs cannot control the outcome of economic shockwaves like Brexit or the spread of coronavirus, they can look to the Government, and to Rishi Sunak in particular, and hope he funds their future.”