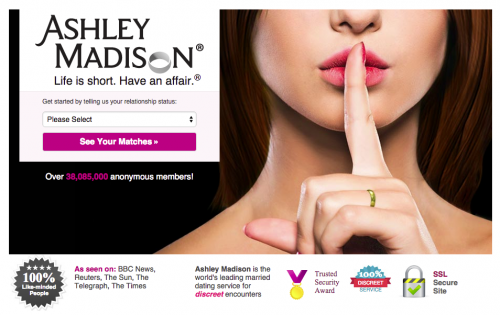 Controversial website Ashley Madison which enables users to engage in extramarital affairs was hacked on 15 July 2015. Then, several days later, hacking group ImpactTeam released some of the users’ data after the site was not shut down according to their demands. In August the hackers once again sent a file full of user information this time leaking the information of a whopping 32m users. And it was later revealed that the hacking group had purposely targeted the site because Ashley Madison profited off the pain of others,” the mystery so-called vigilantes said. Of course, one of the reasons Ashley Madison had arguably been popular was because it promised security to its users. But while the site encrypted passwords, a released statement from the Impact Team said: Nobody was watching. No security. Only thing was segmented network. You could use Pass1234 from the internet to VPN to root on all servers. It’s been thus suggested that Ashley Madison didnt understand the flaws in its security system until after the hack took place, though the methods the hackers used are still unknown.

Telecoms giant TalkTalk was bombarded by several security breaches. In December 2014, the company sawcustomers hit byIndia-based scam callsAfter a data breach. It happened again in February 2015, whenAttackers stole customer information from TalkTalk’s internal systems via a third-party that had access to its network. Its customers were alsoAffected by an attack on Carphone Warehousesystems, in which the personal information of up to 2.4m customers was obtained. And 150,000 customer details were swiped in October 2015. The hack, according to TalkTalk, cost the company 60m and lost it 95,000 customers.

Of those who had their personal data stolen there were 15,656 full bank account number and sort codes accessed. In addition 28,000 customers has their obscured credit and debit card number accessed. The sheer number of breaches has had many claiming that TalkTalk hasn’t kept pace with the quick evolution of hacking techniques nor the set standards for data protection. Several arrests surrounding the hack have since been made and the police investigation is continuing. Read on to discover arguably the greatest bank robbery of all time. By Shan Schutte</a ></em ></p >