The disruptive technologies Philip Hammond discussed will be supported through an Industrial Strategy Challenge Fund (ISCF), which will build collaboration between business and UK science organisations.

“£270m to keep the UK at the forefront of disruptive technologies like biotech, robotic systems and driverless vehicles,” said Hammond, adding a potshot at Labour leader Jeremy Corbyn, “a technology I believe the party opposite know something about.”

Chancellor Philip Hammond compares Labour to a driverless vehicle during the #Budget2017 pic.twitter.com/nOMGYcR94z

Given his reference to driverless vehicles, Hammond revealed he would attempt to alleviate transport issues.

“I’m today announcing £90m for the North and £23m for the Midlands from a £220m fund that addresses pinch-points on the national road network,” he said.

“And I am launching a £690m competition for local authorities across England to tackle urban congestion and get local transport networks moving again.

“My RHF the Transport Secretary will announce details shorty. And because we believe local areas understand local productivity barriers better than central government, we make further progress with our plans to bolster the regions.”

The £270m investment between 2017-2018 will back development of disruptive technologies that are considered to possess “the potential to transform the UK economy”.

Chris Plant, VP EMEA, Atlantis Computing, said: “Technology can play a key part in dramatically boosting productivity and equip the workforce with the necessary tools to compete in a fast-paced environment.

“Starting with the basics is key; by enabling employees to work productively from any office, from home and out in the field from any device will be far more productive than those who are still waiting for the system to login.”

According to the Budget, the first challenges funded by the ISCF will include:

David Griffiths, VP EMEA, Tintri, added his thoughts: “Philip Hammond’s budget aims to bring the digital revolution to the forefront of the national agenda. It’s clear that technical innovation is enabling many of our emerging business success stories.

“The chancellor’s vision is to grow this success which will no doubt bring a period of rapid change. Organisations that can create an agile technology infrastructure whilst providing the tools users need to allow for self-service and automation, will instantly increase productivity and allow these organisations to strongly differentiate themselves in the years ahead.” 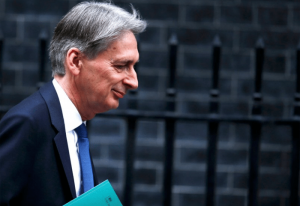