Skip to content
News
Share via
It seems like it was only yesterday that The Chancellor of the Exchequer, Philip Hammond was announcing the Autumn Budget. We’ve blinked, and suddenly it’s spring 2019, and he’s back with the Spring Statment. So, whilst last year’s Autumn Budget delivered for SMEs in many ways, including for high-street retail and associated small businesses, (giving them a £650 million pound life-line including £900m pounds worth of business rates relief), what goods has Hammond delivered on this occasion? [article id=”126145″ title=”Autumn Budget 2018: Refresh yourself”]

A ‘low-key’ Spring statement: Major points at a glance

The Chancellor has delivered quite a subtle Spring Statement, with a major emphasis on influencing a deal-based Brexit negotiation, over implementing any strong domestic objectives.

A dent in knife-crime, eco-friendly new homes and a lack of welfare support

One of the major points was the government’s desire to help put a stop to the knife crime epidemic. The way he’s going to do that? Through a £100 million pound cash injection to increase police overtime and develop prevention units who can act faster to stop the violence when it occurs. There will also be a fossil fuels heating ban on the construction of new homes by 2025. A £3bn affordable homes scheme was also announced. However, a number of activists and organisations are unhappy about the lack of welfare support initiatives in the Spring Statement, with some claiming it’s only going to widen the gulf between rich and poor in the UK. But how about on the business front? Let’s start with the economy…

So, what’s the economy looking like in 2019? – Words from The Office for Budget Responsibility (OBR)

Well, for starters, it’s growing slowly. The last time it was growing this slowly was back in 2009, the year in which the global financial crisis was at its worst, with The Office for Budget Responsibility only forecasting up to 1.2% growth for 2019.

A slow economy, but a great one for business owners and employees

But before we get all gloom and doom about it, they have also predicted that the government will borrow less in light of rising wages and what they deem to be a buoyant jobs market, aspects that were missing during that dark year of 2009. For employers, more jobs mean a greater ability to assess the best talent out there, and for employees, they are empowered by rising wages and the luxury of choice. 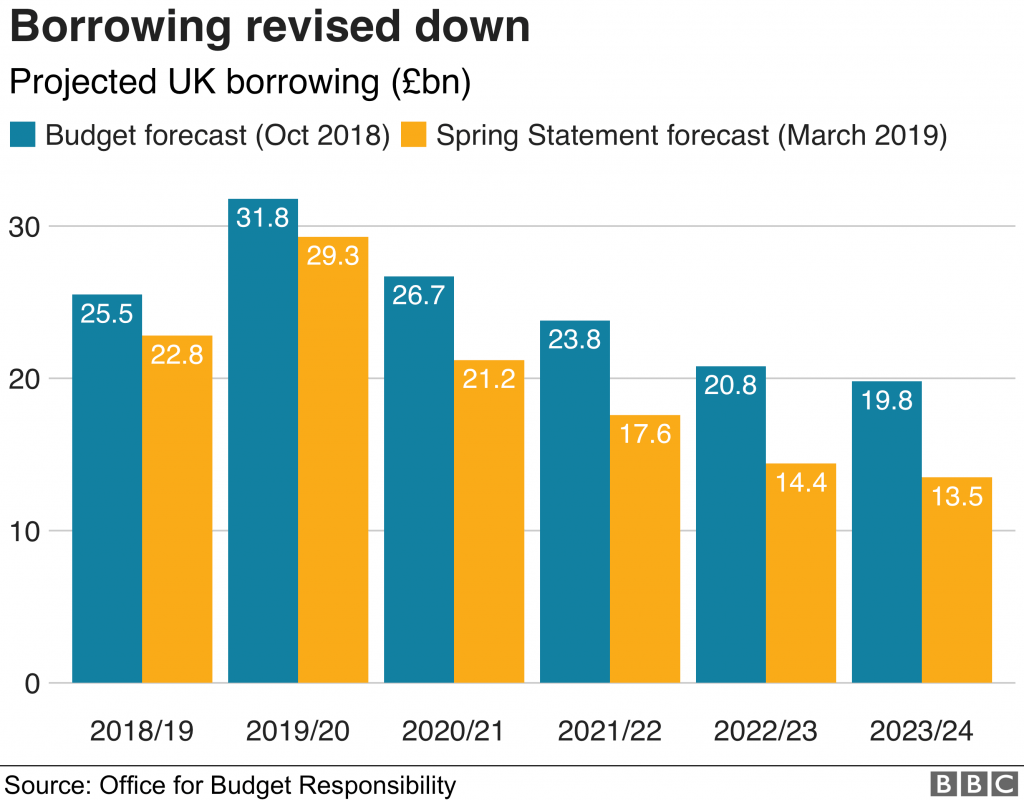 Predictions for Government borrowing over the next few years have been reduced in the 2019 Spring Statement. This year, the OBR has made a big revision on predicted government spending downwards from the 2018 Autumn Budget (31.8%) to a more modest 29.3% this year.

Will the Spring Statement bring some hope for UK business? Yes, but only if we Brexit with a deal in place

1. Brexit is a big factor for government, society and business – and we need a deal

Hammond made it clear that exiting the EU without a plan would cause significant harm to the UK economy in the short-term. He also warned that The Office for Budget Responsibility’s predictions for less government borrowing was based on the premise that the UK left the EU smoothly and with a deal in place.

He also said that providing we left the EU with a deal, we could expect a “deal dividend” which would free up more funding for public services as well as reduce overall taxation and keep government borrowing regulated.

2. The economy is doing surprisingly well – all things considered

Hammond couldn’t quite contain his surprise that the economy isn’t the toilet despite the background of Brexit drama, commenting that “the economy had defied expectations”.

These positive surprises include the fact that wages are expected to keep growing at rates of above 3% over the next half-decade. If taxation is reduced also, employers will have a greater ability to keep up with and facilitate the new demands of employees and the higher paying job market in which they operate.

3. A Brexit deal will mean more money in the pot

Hammond made clear his desire for MPs to agree on a solid Brexit deal. He believes that if they do, the UK government could gain an extra £26.6 billion to spend. This is almost double the £15.4 billion estimated by The Office for Budget Responsibility in October 2018.

4. The government will finally listen to public disapproval – and borrow less

The government is expected to borrow £22.8 billion this financial year, that’s set to be £3 billion less than what The Office for Budget Responsibility predicted they would borrow in The 2018 October Budget.

“The watchdog expects the improvement in the public finances to continue in future years, helped by stronger tax receipts and lower spending on debt interest.” – BBC

A healthy government purse means a healthier business environment. As any entrepreneur knows, it’s a lot easier to run a successful business in a country with a stable financial climate rather than in a poor one perpetuated by a overspending, followed by an austerity-ridden government.

Business leaders and experts respond to The Spring Statement:

Even in his final social media tweet before delivering the Spring Statement, the Chancellor reminded us that this would not be a major fiscal event – and it certainly wasn’t. It was, in fact, more a plea from the government to parliament to reach consensus and to ensure that the UK does not leave Europe with no deal. He even dangled the carrot of a ‘deal dividend’ to the UK economy – both fiscal and in terms of the impact of improved business confidence. One important announcement for business is the government’s recognition of the impact that late payment can have on small businesses and that audit committees will be required to review payment practices and report on them in their annual accounts.

Against a hugely uncertain political backdrop, the Chancellor has made an admirable attempt to set out a long-term vision for the UK economy, yet remains shackled by Brexit. This year’s forecast downgrade brings the danger of no deal to the UK economy sharply into view. It must be avoided. In all, The Brexit debate really dominated this year’s Spring Statement, and in reality, proposing other points are useless until we know what’s going on with our decision to leave the EU.

It may seem as though the chancellor has come out fighting for UK homeowners, but today’s spring statement was predictably compiled of regurgitated rhetoric and slightly misleading claims where the property market is concerned. Of the 220,000 new homes delivered last year, around 10% were, in fact, refurbs not new builds and we remain light years away from the Government’s magic target of 300,000. Help to Buy is arguably the poisoned chalice that has seen prices continue to inflate due to the uplift in demand it has fuelled, while new stock delivery remains inadequate. This playing field may be re-levelled should we see the £3bn affordable homes initiative bring the expected 30,000 additional homes, but as is often the case, these cash promises rarely provide a notable return.