We are so used to ‘traditional’ office environment that, when the first rumours of ergonomically ‘revolutionary’ standing desks reached the news, they were ridiculed. Standing desks were thought to resemble most other health-living fashions: uncomfortable, unnecessary and faddish.

Furthermore, it had a healthy dose of quote-unquote science, which irked skeptics who criticised the over-eagerness of researchers (journalists too). Grandiose claims include: heart damage, cancer – and that sitting significantly shortens your life.

But the skeptic couldn’t deny the evidence that sitting down does some damage to employee health, if it’s for more than five hours a day. This creates a need for employers to think about – and potentially act upon – the demands for stand-up desks in offices.

Something to stand up for

The basic stand-up desk is either purpose built i.e. a desk with very tall legs; or it’s an adaptor which can be attached to your current desk. Either can be quite expensive, around £150 and up per unit, which may immediately present a problem for a businesses looking to invest in them.

The advantage of standing up isn’t that sitting down is inherently bad; it’s that it keeps you active. For example, standing up for long periods can weaken the leg’s veins, causing varicose veins.

As many people who have made a go of the desk testify, standing up for several hours at a time is very painful; which corroborates that old adage, ‘everything in moderation.’ Standing encourages employees to keep their body in motion, which is important for their health.

Employers should be mindful of this when it comes to fitting out a workplace with desks. The problem is a misconception that standup desks are a cure-all or a ‘hack’ (shortcut) to healthier and more economical staff. It isn’t.

Mikael Cho, founder of Crew felt a standing desk wasn’t suited to writers. He found he developed pain in his back and a general discomfort distracted him from the ‘flow’ so important to writing good copy (which is becoming increasingly important to businesses who adopt a copy-heavy marketing strategy). However, Hemingway, Churchill and the novelist Philip Roth all used standing desks, which highlights the diversity of preferences which a workforce has.

Which brings us to the next question: could you have a half-sitting, half-standing team? A BBC journalist who reported on the standing phenomenon also tested it out, she writes: “But when standing, I was quite cut off from my colleagues, most of whom wondered what on earth I was doing.”

Splitting the team into two groups – one sitting, one standing – can encourage ridicule between groups. Denmark has recently made it mandatory for companies to provide an option for sit-stand desks for employees, an experiment which may prove educational about the effectiveness of giving employees a choice.

This creates a problem. Few people doubt the advantages of a more mobile workforce – as one observer jokes, one day traffic in Oxford Street will be jammed because “of all these meetings” – but implementation will be difficult. Firstly, because it isn’t for everyone. Second, there’s a century-old idea of what the modern office looks like: it is shirts, ties, monitors – and office chairs.

Changing the office environment to something more ergonomic shouldn’t be difficult and should be encouraged. The problem with standing desks has been one of disruption of office culture and it’d be an expensive, potentially uneven shift if it happened – which might be why it’s largely been adopted by startups and tech companies.

Being, however, that it benefits the well-being of employees – and may well add years to their life – there is some requirement for employers to act, and soon. 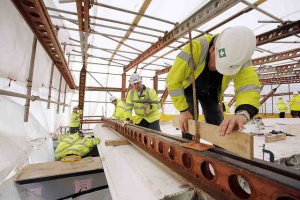