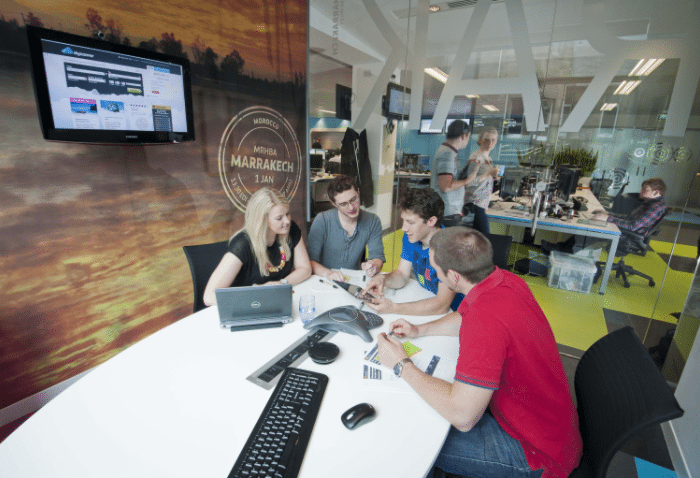 Share via
With new figures showing that only 27 per cent of Scottish small and medium-sized businesses are currently exporting, the efforts exhibited by some of the country’s leading companies in front of a crowd of small business owners suggested this figure could soon change and drive potentially game-changing enterprise growth. Speaking at Amazon Academy in Edinburgh, the third event of its kind after outings in London and Manchester, founders and top executives from Skyscanner, AFG Media and TRTL explained how the company’s operations had been taken global. Designed to demonstrate how a digital approach can open up new opportunities for businesses of all shapes and sizes, Amazon Academy revealed there are currently 10,000 Scottish businesses using Amazon’s digital and physical infrastructure to export around the world generating export tools of £1.8bn. Graeme Menzies, FD at AFG Media, the Edinburgh-based business behind Morphsuits, said the company was set up as internationally leaning from day one by utilising social media in an effective way. He revealed an effective strategy for the business he manages was to not worry so much about short-term profitability. Do lots of things that are loss making, as long as you can see a path to profitability,” he said. Then be precious about cash, that keeps you going in the medium term. Coming from a big four accountancy background and a job at PwC, Menzies is a big fan of the autonomy builtinto the culture of AFG Media. No one person is trying to protect their career, it’s all about the business. The team also have a no-blame culture, meaning some of the best ideas come from those not in a director role. Commenting as the principal designer at Skyscanner, a Scottish business that was bought by a Chinese buyer for around £1.4bn towards the end of 2016, Richard MacDonald-Keen revealed that awareness, and the opportunities that creates, can come from unusual sources. “The first for Skyscanner, when we went from hundreds of daily users to thousands, happened because of an appearance on Radio 2 with it’s ?website of the day” feature,” he explained. ?One of the challenges you get as a business grows, with more employees and offices, is that core values need to be communicated. With new people coming in, one way we do that is painting values on our walls around the world. One that people point out particularly is ?your mother uses Skycanner” would they be proud of it, we don’t want to embarrass them. On the topic of exporting, TRTL founder Michael Corrigan shared how his business first started selling in the US. As a product aimed at making it easier to sleep when travelling with a unique pillow design, said he utilised the infrastructure offered by Amazon through its Marketplace offering by simply boxing up 70-odd products and walking down the street to the post office. TRTL’s enterprise growth has not always been a steady one, with an aborted fundraising effort meaning the founding team took their eyes of the day-to-day and even lost the original trademark held. “The £150,000 seed funding offer ended up being a comfort blanket for us, and through that journey we became more dependent on the money rather than new opportunities,” Corrigan added. Scottish SMEs in the manufacturing sector showed the strongest export capability, according to the newly-released statistics, with 63 per cent of leaders surveyed saying they export outside the UK. This was followed by SMEs in the media/marketing/advertising sector (57 per cent) and the education sector (46 per cent). Emma Jones, founder of Enterprise Nation, said: ?Scotland is a great place to run a business with strong heritage and a skilled workforce. However it’s clear from these findings that there is still some nervousness from SMEs in the country about selling globally, despite the huge opportunity it brings. ?With the uncertainty of Brexit and the resulting uncertain UK economic landscape, it’s really important to spread your risk and broaden your customer base. Meanwhile, Doug Gurr, UK country manager at Amazon, commented: As long as you have a laptop, internet connection, and a great product, you can essentially be local and sell global. “That’s why we were in Edinburgh, to show SMEs small and large, urban and rural, how selling online can help open the business up to a global customer base and drive growth. Amazon Academy in Edinburgh provided a platform for Paul Lewis, MD at Scottish Development International and Scottish Enterprise International Operations, to explain the range of stimulus available to support enterprise growth and advise businesses in the country looking beyond national borders. He highlighted programmes such as DigitalBoost, offering know-how and reassurance to help businesses focus on digital capabilities, and CodeClan, Scotland’s first ever dedicated software skills academy. “The pace of change is really fast, and is accelerating,” he added. The amount of data produced each year is the same as throughout history. In my view this is a massive opportunity for all.