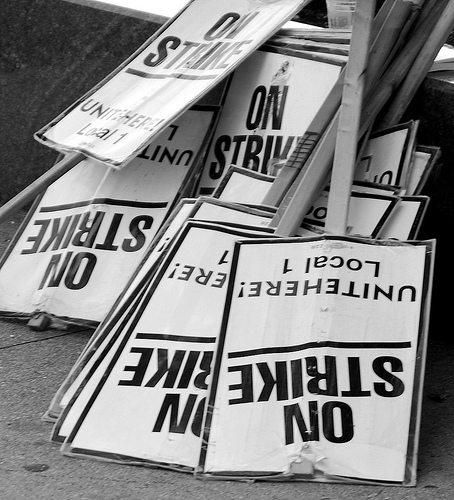 What with the Prime Minister calling COBRA meetings, Francis Maude having a “foot in mouth” moment and forecourts across the country with longer queues than the Post Office on giro day in 1982, it looks like we’ve got ourselves in a right mess over fuel!

I hoped it would all blow over, but it looks like Unite has decided to take a stand, not because these are low paid workers or because safety standards are dangerously lax, but because they are hell bent on having it out with the Government. And, by using tanker drivers in their game of political chess, they can have a massive impact by bringing the country to a grinding halt. In fact, even the whiff of a crisis (plus a few news correspondents stood on busy forecourts predicting the end of the world) and the country’s gone into meltdown. The whole thing is completely politically motivated, and if I had my way, I’d throw the union leaders in jail for causing unnecessary panic just to serve their own selfish ideological purposes. There are many I suspect who will be hit harder than us – I’m thinking of people who rely on fuel to run generators, which in turn keep refrigeration units, and even life support systems in hospitals running. But should the pumps dry up, we will be out of action in two or three days I’d imagine, even if all our fleet of 150 vans and cars each have a full tank when the tanker drivers walk out. It will cost us a fortune – about £50k a day – and that’s just one plumbing company. It will cost the country billions, and that’s just not something we can ever afford, let alone right now.u2028 I’ve always said nothing good ever comes out of strikes, since everyone ends up taking the pain, and these days they feel more and more like ridiculous re-enactments of ideological wars that have been over for 30 years. The union leader dinosaurs who seem determined to stage one last (misguided) class battle need to be smashed, because, mark my words, if they get even a hint of a victory on this they will have no hesitation in trying to destroy the Olympics. I almost feel sorry for the tankers drivers who have been sucked in to this like pawns, but this is something the government cannot afford to cave on, because believe me this is a full dress rehearsal – and next time it will be public transport! Charlie Mullins is founder and CEO of Pimlico Plumbers.