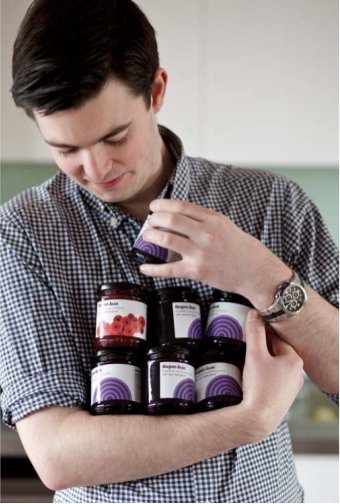 Fraser Doherty, the founder of SuperJam, has released a cookbook to celebrate “all things jammy”.

From teaching you how to make a basic summer fruits jam, to more complex “banana and rum” or “strawberry and rose petal” jams, curds and marmalades, Doherty packs the SuperJam Cookbook with over 75 easy-to-follow recipes, including those for his best-selling jams. “I’ve been working on the book for two years,” he explains. “I just want to share some of the things I’ve learned about making jam, and raise its profile. Whenever you mention jam, people smile – it’s just one of those things.” In the past few years, jam had acquired a somewhat old-fashioned image, but with SuperJam, Doherty is turning the industry on its head. SuperJam – a cleaner, quirkier, modern brand that stands out on the supermarket shelf – has already made big inroads into the market. And the fact that it’s healthier than a lot of other brands (most add sugar to the recipe, SuperJam uses fruit juice) has made it a best-seller. We’ve been big fans of Fraser Doherty for a while already. He was one of our finalists for the Young Entrepreneur of the Year award in 2008, and was one of our “30:30 Vision” winners earlier this year. The 21-year-old Scottish entrepreneur started selling his homemade sugar-free SuperJam to friends and family aged just 14, before signing up Waitrose in 2004. Today SuperJam is sold in over 1,000 stores, shifting over half a million jars per year. To celebrate the new book, we were lucky enough to attend Fraser Doherty’s launch party last night. The party – a vintage tea party held in the Bethnal Green Working Men’s Club – was sponsored by Courvoisier, and included live music by up-and-coming artists Gabby Young and The Bang Bang Club (which were both brilliant!). Alongside the homemade scones and cakes, guests were treated to fantastic cupcakes by Vintage Patisserie, whose founder, Angel Adoree, featured on Dragons’ Den last week (and was successful in raising an offer of £100,000 from Paphitis and Meaden). And continuing with the tea party theme, Courvoisier served their acclaimed summer punch from teapots. One thing’s for sure: if jam-making is as fun as “Jam Boy’s” parties, the SuperJam cookbook is set to become a best-seller. You can buy your signed copy of The SuperJam Cookbook, published by Ebury Press, for £10.99 here.