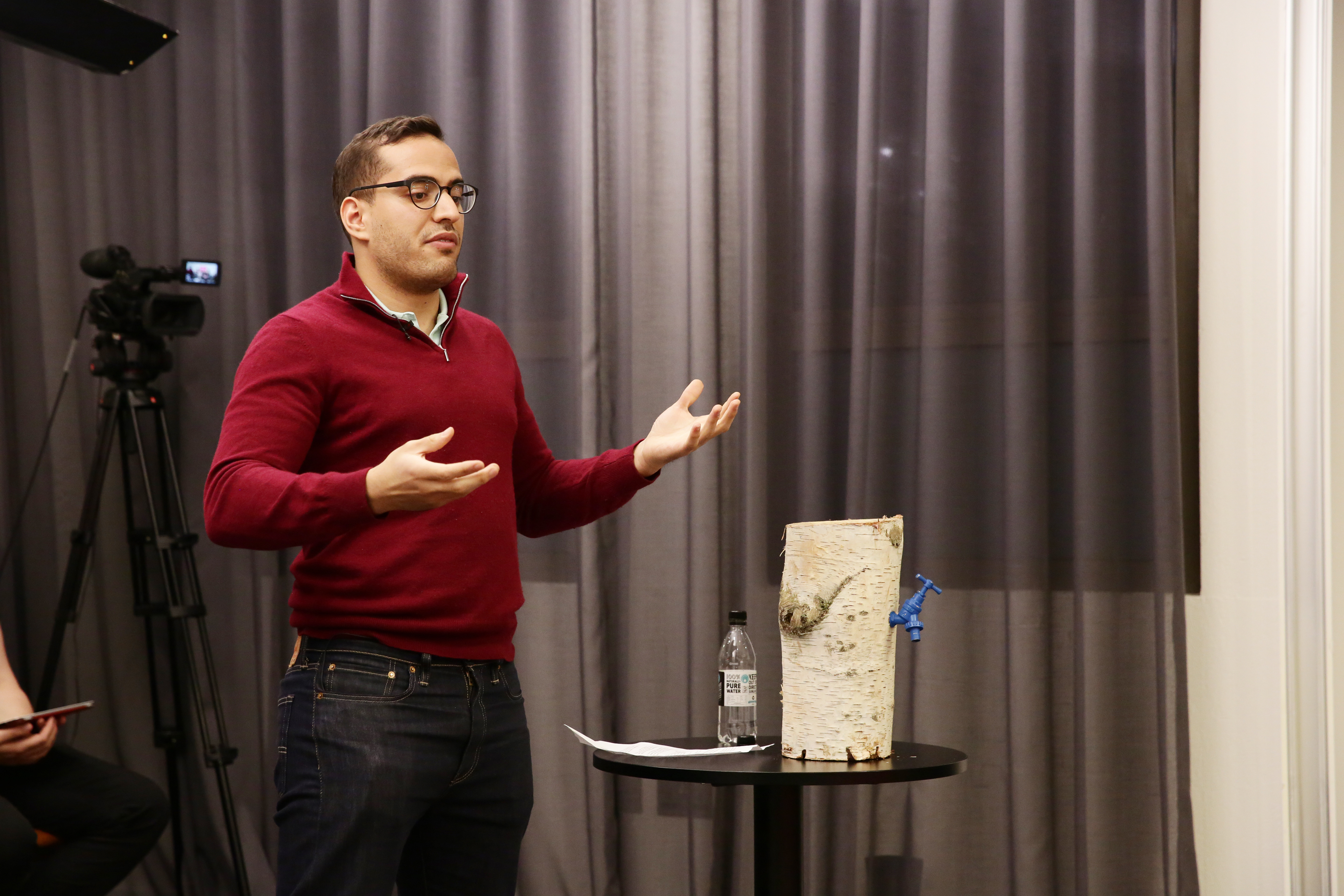 Co-founded alongside Clara Vaisse, Sibberi has been created after hearing that models based in the Italian city had embraced birch sap as a drink, rather than the sugary coconut water alternative that has proven to be popular.

With a plan to win big at the 1m VOOM grand finale on Tuesday 28 June, Meghzifene plans to secure victory by dazzling head judge Richard Branson with a bust of his own head. Category: Grow Location: London Founding year: Founded in 2014, launched in 2015 Sector and company description: Food & drinks Sibberi is the first company that brings tree water to market (1) What was your inspiration for launching the business The success of coconut water was the inspiration for looking into natural food as a business idea. Now, as for the idea itself, it all came from a friend who was modelling in Milan at the time. As we were catching up over coffee, she laughed when I asked how life eating kale and drinking coconut water was. Apparently all models in Milan were drinking birch sap as they believed coconut water had too much sugar. She told us how the Russian models had put together special networks to collect the sap direct from the trees in Siberia. She also told us how annoying it was to preserve and how models in Milan were all keeping frozen birch sap in their freezers. Surely if they fought so hard for it, there had to be something special with birch water. We could not find any in the UK so we embarked on a quest and went to Latvia where we managed to find fresh birch sap for the first time. As soon as we tried it we knew we had to share with everyone.

(2) Who are your target customers The easy way to put it is ‘people who drink coconut water’. Target customers are mainly young mums, people working in creative industries and professionals seeking a healthier lifestyle. This will expand eventually as the market is structurally shifting to more natural and healthier foods. (3) What prompted you to take part in VOOM this year Aduna, the Baobab brand has been a true inspiration for Sibberi since we started. We love the brand and the concept, and are really impressed with what they have achieved so far. We were so excited when they made it to the finale last year that we decided to participate this year! (4) How did you find the Pitchathon, and what did you do to prepare The 23:30pm-1am power nap is what gets you there! As for the Pitchathon itself, the whole thing was surprisingly nice and casual. I was looking for the man from the Guinness Book of World Records to give him a high five. I am fascinated about his job, travelling around and seeing people performing incredible feats! Unfortunately, I never found him I guess he was undercover.

(5) Prior to that, what was your experience of pitching As a startup you constantly have to present to buyers, investors, press, even at casual dinners people tend to ask you about your startup. Essentially, you get used to pitching your idea and telling your story. Being in front of such a judging panel though is very impressive and brings back the adrenaline levels experienced at the first few pitches.

(6) What did you learn from the event Good things can actually happen after 2am! (7) Why do you think you got through to the semi-finals Pitching was actually the easy part. It was just about telling the judging panel what the Sibberi team has achieved so far. The real hard work was growing the business to where it is today and this is entirely down to the amazing team we have put together. (8) What went through your head when you were told you had made it to the grand final How do I find someone who is able to sculpt a bust of Sir Richard Branson from a birch tree log (9) You’re going to pitch to Richard Branson what will you do to ensure you impress him and the other judges to win Well, if I actually find someone, I will bring in the bust of Richard Branson from the birch tree log, otherwise Ill just brings loads of samples! If you try tree water, you fall for it, for sure. (10) Should you be victorious, what’s the big ambition for the company over the next year and then five years The ambition over the next five years is to expand the distribution for Sibberi nationally and internationally and improve the awareness for tree water. We want to make sure everyone is aware that they can grab tree water rather than coke or coconut water. Its a horrible feeling to see people poisoning themselves when they can drink something, natural, low in sugar and sustainable. By Zen Terrelonge From 3,000 entrants, these are the six SMEs chosen to pitch to Richard Branson at the 1m VOOM 2016 finale.