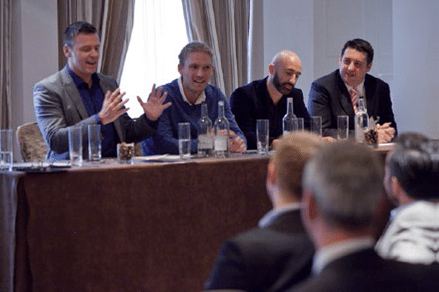 Talent in the 21st century, the fifth event of Recruitment company Harrington Starr, “a business founded on the parallels that exist between sport and business”, was created with that thought in mind.

“We believe it starts with knowing what elite performance looks like and how you shape your team to espouse that culture”, said Toby Babb, founder and managing director of Harrington Starr. “Once what ‘great’ is has been identified, the next steps are to determine where those key performers are, to build best in class attraction plans, to recruit that talent, develop them, measure them, retain them and, ultimately, know when the right time to release them may be.” Greg Searle MBE, Olympic medalist in the rowing coxed pairs, kicked off the elite performance panel by mentioning that during the duration of his Olympic career he noticed how coaches and business leaders alike changed how they identified talent. Gone are the days where raw talent was the only way to measure potential. This is a concept that Ben Hunt-Davis MBE, business coach and Olympic gold medalist in the men’s rowing coxed eights, wholeheartedly agrees with. In fact, Hunt-Davis states that there’s more to the recruitment process than having a great CV, or physiology. “There are numerous people with all the physical attributes that haven’t made it because they don’t have the right learning mindset. It’s about having a clear focus on what you’re trying to do and having the discipline to do the things that will really make a difference rather than just doing the things that are in front of you. Recruits and staff need to be prepared to challenge themselves.” Indeed, Mike Forde, one of the world’s leading high performance and talent management consultants, believes that “the first piece in that talent jigsaw is passion and then hopefully the curiosity, that learning mentality, will kick in next. Say that you’re working with a football team which has 25 players. Out of those 25, only five will be considered elite performers. The goal is then to create a culture around that talent, creating a high-performance team.” But it is possible to spot talent from an early stage. According to Simon Hartley, who applies sport psychology coaching to corporate clients, it is something that people demonstrate when given a task. “I sometimes work with 20-30 athletes in a squad. At one stage, I wanted to understand what it was that differentiated that one world-class performer from the rest. If you look at them working, you see it in their application, in how they go about what they do. If you gave a training card to a squad of swimmers, some of them would do 800m because that’s what it said on the card. Some of them really apply themselves to the 800m. They’ll think about how they do every stroke and how they take every turn, or how they push off every wall. Those athletes, just in that one session, will get that tiny bit better. They’ll compound it tomorrow, and the day after, and you start getting a gap between them.” And don’t be afraid to fight for that talent! “I’ve worked with a lot of companies over the last 12 years who have put up all sorts of barriers that prevent key performers from getting a job they would most likely thrive in,” says Hunt-Davis. “If organisations want to make money and be successful, then they need to get the right people involved, even if they don’t have a Masters or didn’t ace a maths test. If the process to get that talent onboard isn’t right, then you need to change it!” But how do leaders change the culture that supports that talent? “A leader’s role is absolutely critical in talent retention and development,” Hunt-Davis explains. “Essentially, without the right leadership, without the right culture being created, it’s easy for talented people to disengage. Whether that be as individuals or working as a team, making sure that people are continually engaged is key! Although leading and motivating is difficult, you need to figure out what’s in it for them and what motivates them.” By Shané Schutte