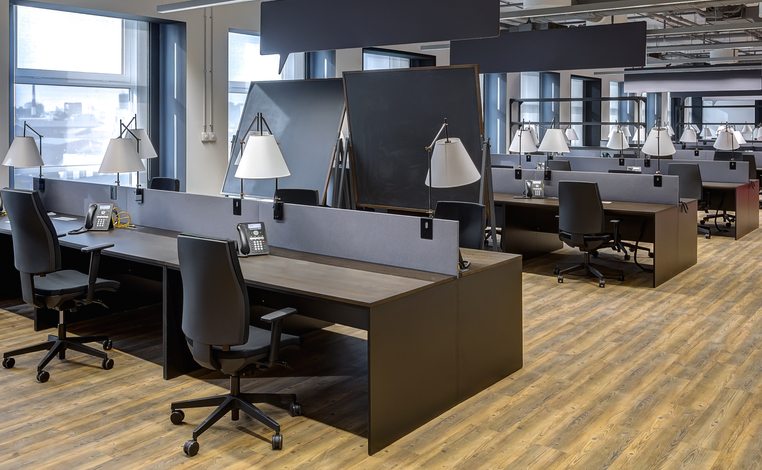 It’s hardly hot news that the office space era of nine-to-five, fixed desks, and water cooler moments’ is drawing unceremoniously to a close, replaced by a mixture of flexible, remote and distributed working.

Recent statistics in the US, for example, show the number of people working regularly from home (not including the self-employed) has soared by some 103 per cent since 2005.

Meanwhile in Europe, 71 per cent of organisations now permit working from home and 76 per cent have made company systems and data available to remote workers, according to IDC. What’s, perhaps, more surprising is what’s coming next for the office space.

In the coming years, we will still use office space, but less frequently, and primarily for meetings and collaborative working in shared spaces or at “hot desks”. And buildings will be reconfigured accordingly.

Typically, about 50 per cent of a building will be dedicated to meeting spaces or communal areas, in the near future, as opposed to the 20-25 per cent that we see today.

Additionally, there’ll be a desk to people ratio of 1:20 (until recently it was often 1:1), while staff restaurants and coffee shops, long since doubling as shared working areas, will increasingly become places where meetings are held, video calls are made and work gets done.

To maximise office space efficiency, meeting spaces and desks are already being managed by smart platforms, which are set to get even smarter. Today, hundreds of companies, including many household name multi-nationals, are scheduling tens of thousands of meeting rooms across multiple countries.

Employees can reserve rooms anywhere in the world and check in with their security badge, which helps eliminate no-shows and optimise office space usage by, for instance, notifying potential occupants when a room has been empty for 15 minutes.

Meanwhile, driven by Generation Z, who use FaceTime or other video applications as a matter of course, work calls will be overwhelmingly video-based. Video screens (and interactive whiteboards for collaborating on  documents or presentations) will become a feature of every shared space, while cross regional and international “meetings” will also mostly be conducted over video.

The lack of interoperability between virtual meeting tools such as Pexip, Acano, LifeSize, Cisco and Polycom is no longer an obstacle to the widespread adoption of video-conferencing.

Condeco, for example, just acquired a company in the US called MyVRM, which at the push of a button enables connectivity between multiple platforms. The rise of “video everywhere” is likely to consign conference calls – which, let’s face it, most of us use to catch up on emails anyway – to history. It’s also likely to reduce overall business travel.

While we’re a long way off hologram-only meetings or humanoid robot supervisors patrolling office space, automation and AI are already transforming aspects of business from the estimated 30,000 Kiva robots toiling in Amazon warehouses worldwide to in-store robots in the retail sector.

Although the march of machines is rather less pronounced in office space, we are already seeing an increase in so-called “narrow” or “weak AI” – defined as limited, non-sentient automation.

From improving efficiency through monitoring past behaviour – by, for instance, prompting you to set up a meeting with people you regularly meet with – to remote receptionists and customer service bots, this is a trend that is certain to continue, making the workplace increasingly intuitive.

However, there will be natural constraints to the way narrow AI and data-driven technology evolve. While it has long been possible to track workers’ whereabouts via RFID tech, it’s only acceptable to do so if there is a definable goal in mind.

A case in point was an RBS study which monitored employees’ workplace movements (with their permission) in order to find ways to reduce their individual carbon footprints. This sort of Big Brother technology won’t creep into the everyday workspace, primarily because tech has to have a human purpose; it has to be useful, not intrusive.

Yet as teams continue to disperse and meetings shift to video, organisations will have to find new ways to preserve their core values and company culture. There are several ways this is already happening and I predict their adoption will grow.

One method is the increasing use of online induction, skills and learning management courses, sometimes known as “academies”, covering everything from health and safety to company values.

Another popular development is internal company networking events such as “Lunch and Learns”, where staff are invited to a lunch hour (or after-work) course or presentation, or to hear a guest speaker.

Similarly, town hall-style events are also on the rise, where major company-wide meetings are streamed live or as live across a firm’s office space in multiple geographies on large video screens.

All of these help boost company cohesion and morale at a time when people are working any time, anywhere – whether that’s at home, in an airport lounge or in purpose-designed hubs.

After all, people still want to feel part of a community, however fleetingly. And whatever else technology changes for office space, it’s unlikely to change that.