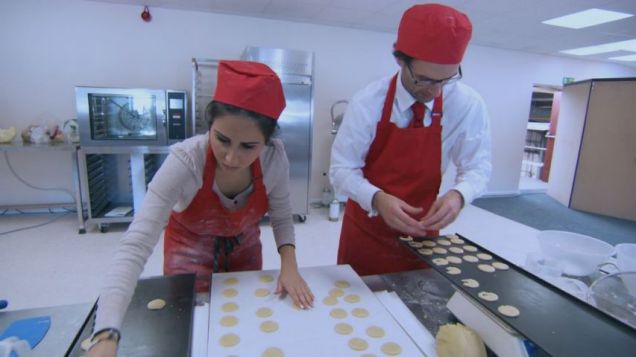 Last week, The Apprentice teams were whisked off to France to try and sell some unique British products to the French. The task ended with a fantastic win for Venture (though just how real it was remains to be seen…), and we lost Leon.

This week, The Apprentice teams were surprised by Lord Sugar as he turned up at the Apprentice house to give them their brief.  The Apprentice teams had to design, make and sell their own biscuit brand, and would have to pitch the biscuits to three of Britain’s biggest supermarkets: Asda, Sainsbury’s and Waitrose. Biscuits had to retail at £1.99 – a premium price bracket.  Helen was made project manager for Team Logic, while Zoe put herself forward for Team Venture.

After wrangling over what sort of biscuit the teams should make, Logic team leader Helen opted for a kids’ biscuit, sending Tom off to the biscuit development laboratory (would love to work there!) to make and test the biscuit with a focus group. The biscuit, a flapjack-and-chocolate design, went down very well and was named “Special Stars” by the team – it was effectively a round flapjack with a chocolate star on top. The “Special Stars” slogan? “Anytime is treat time”… a bit confusing. Zoe’s team, meanwhile, opted for a “sharing” biscuit: a digestive half-covered in chocolate that could be snapped in half. This biscuit was named “Bix Mix”. After designing the biscuits’ packaging, both teams were then sent off to sell their produce.

Crunch time in the boardroom, and unfortunately Zoe’s team failed to achieve any orders from the retailers. Not one took Team Venture’s biscuit! But, my gosh, didn’t Helen only go and bloody do it again! Team Logic delivered an outstanding £800,000 order from Asda, if they were willing to give the supermarket exclusivity of the biscuit.

After a rather large barney with Melody in front of Lord Sugar, Zoe picked Melody and Tom to take back into the boardroom, blaming Team Venture’s failure on their lack of creativity with the taste and design of the biscuit. Eventually Zoe was both dipped and dunked herself, as she was found to be stale.

Oh crumbs, we lost Zoe! While she gave us some interesting viewing over the last eight weeks – her arguments with numerous members of the team and her flirtation with Jim was quite entertaining – that’s just the way the cookie crumbles. It was yet another uneventful week for Natasha – hopefully she’ll attempt to do something remotely interesting next week. (Anything Natasha, please! Just entertain us!)  Jim, meanwhile, was back on form this week and seemed to pick up after a few weeks of taking a back seat on the show. And yes, if you haven’t guessed who our money’s on, Helen is just superb. She’s now the only member of the team who has never failed a task, and if you tally it up, she has made Lord Sugar a whopping £1.8m. Bring on next week!