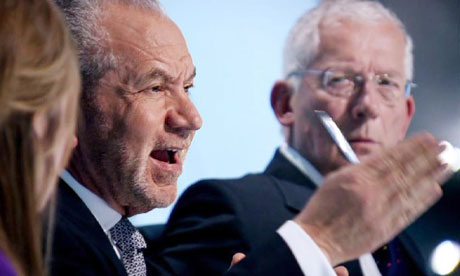 Share via
Lord Sugar could be left red faced after news has emerged that last week’s “record-breaking” deal never actually happened. In last week’s task, The Apprentice candidates were?whisked off to Paris to try and sell British products to the French. In the boardroom, Team Venture came out on top, with a “record breaking” deal worth ?214,000 between BoostApaks’ maker Trunki and shopping catalogue La Redoute. But it has emerged that the deal, branded “a brilliant result” by Lord Sugar, was never actually finalised. The news was revealed in the Daily Star. According to Trunki spokesperson Penny Amey, the order with La Redoute is merely “a possibility”. “We’re not allowed to follow up anything until the show airs, so no agreement on how many units they may take has been reached yet,” she said. Trunki sales director Toby Davies added: “There is still a long way to go ? but we’re definitely following up on it.” Were The Apprentice viewers misled last week??It would seem so ? viewers were clearly told that Helen Milligan had secured an order for 10,000 BoostApaks. Lord Sugar’s reaction to Helen Milligan’s “coup” was to brand it “a brilliant result, very, very good”, and a “record” for the boardroom. The official line from the Beeb (sort of) explains the misunderstanding. A spokesperson said: “As part of the task this week, the candidates had to pitch a product to a number of retailers who decided whether or not to place a provisional order. After the task has taken place, should the retailers wish to follow through with any orders, production refer them on to the manufacturers.” Hmm…