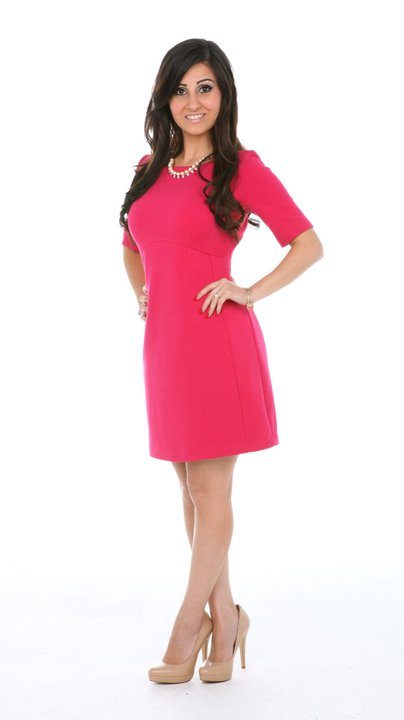 Aged just two years old, Melody Hossaini and her family fled Iran, escaping the Iran-Iraq war. “The journey of us fleeing was an extremely risky and dangerous one by land, with my mother holding her two babies,” Melody Hossaini explains.

2. Melody Hossaini was once held at gunpoint

“At the age of 12, I was alone in the house one evening when there was a knock at the door,” Melody Hossaini explains.? “Without asking who it was, my brother ran to open the door. Two men with guns pushed their way into our house and held us at gunpoint. They then gagged us and tied us together with rope and threw us in a wardrobe, where we stayed until they had left.”? Thankfully, no one was hurt ? they only stole money ? and the gunmen were never caught.

3. Melody Hossaini grew up in Sweden

Don’t let Melody Hossaini’s accent fool you ? she spent most of her youth growing up in Sweden. “I grew up with the best quality of life in Sweden,” Hossaini explains. “I enjoyed all that was up for offer by the Swedish state as a child, and got to experience some really life-shaping things, not least living bi-culturally.” Her family relocated from Sweden to the UK when Hossaini turned 13, after the gunmen incident.

Yes, it’s true! Melody Hossaini was a co-founder of the UK Youth Parliament, a youth organisation where youngsters are voted in to represent the views of young people in their area to government and service providers. “When my peers would go shopping, I would be sitting in meetings in the Houses of Parliament, implementing a strategy for UKYP’s future,” Hossaini says.

5. Melody Hossaini was bullied at school

Her success as a youth leader led her to be bullied at school. Hossaini explains: “It caused a lot of bad feeling, jealousy and tension amongst my peers at school. I went through some of the worst years of my life at school ? I suffered from bullying and racism. But I felt I needed to keep focused on the bigger picture.” The bullying only pushed Hossaini to work harder to set up the UK Youth Parliament, which is now globally-recognised as the best of its type.

6. Melody Hossaini had a place in law school, but rejected it

Not many people have the guts to reject a place in law school, but Melody Hossaini didn’t think twice about it.? After gaining a law degree from Oxford Brookes, Hossaini secured a place at the Oxford Institute for Legal Practice, but she turned it down, in order to work as a project officer at the National Youth Agency.

Melody Hossaini’s success in the youth sector has led her to be honoured with several national awards.? In 2008, Hossaini received a “Woman of the Future” Award for her work in the youth sector, presented by HRH Princess Badiya bint El Hassan of Jordan and HRH Princess Zahra Aga Khan.? The judges said: “What Melody has achieved at just 23 is remarkable. It would not surprise me if Melody herself were, one day, to be nominated for the Nobel Peace Prize.” In 2009, Hossaini was awarded with an “Asian Woman of Achievement” Award for outstanding achievement in the youth sector by HRH Prince Charles and the Duchess of Cornwall.

You can catch Melody Hossaini on BBC One’s?The Apprentice.