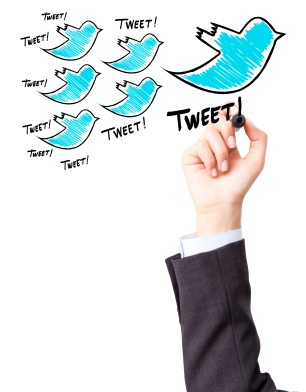 For years I’d been sent large, professionally produced business plans, sometimes running to over 60 pages. Being the rather impatient person I am, these almost always went straight in the bin after having read through the first few mind-numbing pages and pointless waffle.

It was frustrating because I have a massive interest in investing in new projects. It occurred to me that Twitter could work really well for looking at new ideas – it’s easily accessible, anonymous if people want it to be, and of course, succinct. I figured that if someone could interest me in 140 characters, they’d be worth a follow up. So, I put a quick message up on Twitter one day which said: “Looking for investment propositions, tweet your ideas only please here.” It got picked up by the national press pretty quickly, which then lead to far more pitches, ranging from the sublime to the ridiculous. From hundreds of pitches, I have so far invested just over £1m in four very different businesses.  So, the successful ones first:

This was from Rachel Lowe, creator of the award-winning game “Destination”. For a variety of reasons the company needed a cash injection. But when I met with Rachel it was a side project she’d shelved a couple of years before that really caught my eye. It was just a simple logo for a new brand she was thinking of at the time, “She Who Dares”. I immediately loved this and so we set about creating a perfume and luxury gift company. Pre-launch reaction so far has been amazing, and yes, Destination games are still going strong.

2. “I want to inspire people, not just film makers, but everyday people who are the heart of what my film is really about.”

One aspiring entrepreneur who really impressed me was Meddy Ford and as a result, I invested in her big idea. Meddy is a former international model who has appeared in magazines and newspapers around the world (of course, this had absolutely nothing to do with my interest!). A successful modelling and acting career resulted in some serious earning potential, but Meddy’s real dream lay in film-making. But making the transition from glamour model to producer was no easy feat for her – she found it very difficult to break into the right circles and prove her vision and creativity. She dyed her hair from blonde to black in a bid to be taken more seriously and took a huge down-step in salary by quitting her former life so that she could realise her ambitions. For a long time, Meddy had been working on a movie idea that she was determined to see through – a project that would showcase the best of British Independent film-making, based on a premise that many inner-City youngsters in the UK can relate to: a teenager from an impoverished neighbourhood who acquires redemption and empowerment through becoming a sporting great. Many investors she tried to engage for financial backing failed to look past the glamour model background. She came across me and my Twitter Dragon initiative when reading the newspaper one day and decided to pitch her film concept to me and the need for funding with a 140 character Tweet. I liked her idea, admired her thirst to contribute to the British film industry, and was impressed by her tenacity. I could see great potential in a young team dedicated to making a great British film in the year of the Olympics, and so I ultimately pledged a generous donation towards the project to kick-start production. The movie, Driftwood, is now in the process of being made.

3. “Magazine to cater for the needs of a huge niche market, currently with little competition.”

I was really impressed by the business idea of a young entrepreneur called Charlotte Fantelli. Charlotte had experienced quite a tumultuous life. She had suffered from acute agoraphobia and found the recovery process a challenging one because of the lack of information and help out there for people suffering with mental health issues. She was concerned about the lack of available support and resources on the market to help sufferers and their families affected by mental health issues. It was her vision to create the UK’s first mental health glossy that would serve as a unifying support system for people affected by these issues. We did this, and following a successful print run of the magazine decided to open a website called mentalhealthy.co.uk.

4. “We will change the way the music industry works – good potential upside for little cost.”

Well, David Bowie is one of my idols. For many years I wanted to be a rock star, so I guess I’m a little predisposed towards musically oriented business ideas. I also believe that, without a shadow of doubt, the music industry needs shaking up at the moment. One of the best music related business ideas pitched to me on Twitter was from an exciting and dynamic young company called Global Moguls, who avowed to change the way the music industry works, pledging huge potential upside for not a huge cost. Essentially, it’s a comprehensive artist growth/development company that focuses primarily on digital distribution, promotion and touring, giving the musical talent of the world a platform to shine on. This grabbed me and I loved how the team behind the business were championing live music and spotlighting the creativity emanating from countries all around the world.