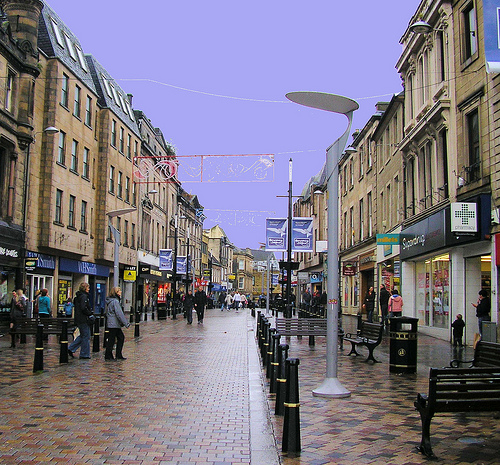 With cities such as Liverpool, London, Bristol, Leeds and Cardiff boasting shiny new retail centres in the forms of Liverpool One, Westfield, Cabot Circus, Trinity and St. David’s respectively, you’d be forgiven for thinking the retail industry across the UK is in good health. However, the ‘To Let’ signs that punctuate many streetscapes across the country, not to mention the proliferation of bargain and charity shops, tell a different story.

Liverpool may have reinvented itself in 2008 with the opening of the £2bn Liverpool One shopping district, propelling it from No 14 in the UK retail destination league table to No four in the intervening years, but like many cities, it isn’t immune to the lure of the out-of-town mall and the seemingly unstoppable rise of online shopping. Outside of the urban centres, the situation appears bleaker. In towns like Slough, Oldham and Selby – where retailers also have to compete with nearby regionally dominant centres – the decline of the High Street has been severe. Brands like Blockbuster have disappeared, while HMV and Jessops have been severely affected by the incursion of technology. Other chains have contracted for similar reasons and have been replaced by payday lenders, betting shops or just vacant shop units. Indeed, it’s estimated that there are some 40,000 vacant shops in the UK. It’s a decline exacerbated not only by six years of financial turmoil, but one which is as much driven by structural change to the retail industry. The British Retail Consortium reckons that more than 17 per cent of all non-food retail has now migrated online – a shift which they believe will only continue as technology becomes more integrated and retail businesses more sophisticated at their online marketing. The Office of National Statistics put online as a total percentage of sales at 12 per cent. And it’s a figure that looks set to grow, according to Paul Merchant, an Equity Research Analyst at Quilter Cheviot, who has expertise in the real estate sector. He says: “The estimates vary but we might expect, on the current trajectory, for online sales of non-food retail to rise to about 25 per cent of the total in the next few years. But it’s notoriously difficult to predict because any estimate could be blown out of the water by a piece of new and disruptive technology which might alter that path.”

So is the future of the British High Street an entirely bleak one? Merchant believes not. He does think, however, that a tale of two kinds of city is emerging in Britain, with the larger cities becoming ever more economically successful – and the smaller or satellite towns finding life becoming more difficult. Merchant began his career in the Bank of England in 1972, the year that the very first hypermarket opened in the UK – a Carrefour in south Wales – so has witnessed many years of change in the real estate and retail landscape. His view is that town centres and high streets must stop seeing themselves as shopping destinations and embrace a more holistic future. He believes that certain places have cottoned on to this and cites the rise of leisure and experiential businesses on our high streets – coffee shops, cafes, restaurants – as an example.
“London is unique in that its many high streets have remained robust, varied and attractive throughout recent history, but today it is a global mega-city with strong population growth and an economy fuelled by the City and by its international connectivity,” he says. “But what we’re also witnessing, if you take a 20-year view, is a resurgence of the UK’s big regional cities – places like Liverpool, Bristol, Leeds and Manchester. Those cities have a brilliant cultural offering and magnetic regional identities. They’ve also undergone sympathetic city centre regeneration schemes which have helped to create a new city centre landscape better suited to the 21st century. “The High Streets in those cities aren’t just about retail anymore but about spending leisure time as well. So quality established brands are acting as High Street anchors with the in-fill being provided by both independents and chains with a leisure and lifestyle offer. “The recession, ironically, has helped that. It has driven rents down and created opportunities for creative entrepreneurs and independents. City and town centres are often the engine-room of a local economy. But the truth is that we can no longer rely on retail to fuel that engine.”

City and town centres must therefore become places where people live, work, eat and play, not just shop. And the night-time economy will become almost as important as the day-time economy in the coming years. Candidates for new generation high streets could follow the example set in Huddersfield, West Yorkshire, where one former store, Thatchers Furnishings, is being turned into 40 student flats two years after going bust. In Watford, local residents turned an empty corner shop into a community centre. And in Wirral, shops have been transformed into community centres offering after-school clubs, healthy eating lessons and literacy courses. And technology can, in fact, assist the renaissance of our high streets. New social media tools mean more of us are seeing, sharing and discussing all the time. It’s those experiential opportunities and that integration which high street businesses must embrace and exploit. Helen Dickinson, Director General of the British Retail Consortium, says the combination of an online presence with a bricks and mortar offering is becoming increasingly compelling for retailers. She explains: “There’s no doubt that online is driving structural change within the sector and retailers will continue to invest heavily to provide the seamless experience between channels that today’s shoppers demand. Our figures showed that 17.4 per cent of all non-food spending is done online and we expect this number to rise as operations become more efficient, collections more convenient, deliveries faster and technology more integrated.” Paul Merchant says retail centres will unquestionably see more change as technology develops and, critically, as the next generation of consumers emerges. It’s our children, who are growing up in a 4G-enabled, Web2 environment and who are already as comfortable in the virtual world as the real one, who will dictate the future of the British High Street. “17.4 per cent of all non-food spending is done online and we expect this number to rise.” The value of investments, and the income from them, can go down as well as up. You may not recover what you invest. Jon Brown is director of PaverSmith. Image source Quilter Cheviot Limited is registered in England with number 01923571. Quilter Cheviot Limited has established a branch in Dublin, Ireland with number 904906, is a member of the London Stock Exchange, is authorised and regulated by the UK Financial Conduct Authority, is regulated by the Central Bank of Ireland for conduct of business rules, under the Financial Services (Jersey) Law 1998 by the Jersey Financial Services Commission for the conduct of investment business in Jersey and by the Guernsey Financial Services Commission under the Protection of Investors (Bailiwick of Guernsey) Law, 1987 to carry on investment business in the Bailiwick of Guernsey. Accordingly, in some respects the regulatory system that applies will be different from that of the United Kingdom.