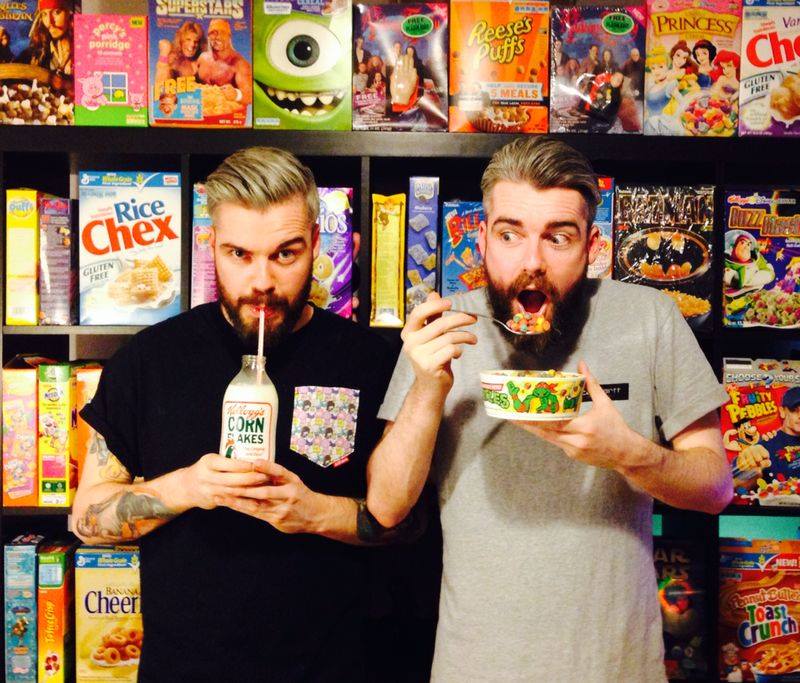 Despite the USP of the business being cereal, Keery expected the venue would be perceived as a regular coffee shop, but said ?we were surprised to find less than five per cent of takings come from hot drinks. The majority is made from the cereal, toast, Pop Tarts and merchandise.?

Indeed, while Cereal Killer Cafe is stocking branded goodies for dedicated customers, it’s also acting as a retail outlet for local artists and creative types who have made cereal themed prints, badges and magnets from bottle tops, and even solid necklaces made of Cheerios ? with both parties making a cut of profits upon sale.

With Gary’s experience in sales, he takes care of the operations and logistics, while Alan’s experience as a Superdry store manager for 12 years means he’s in a position to take care of human resources.

Offering more than 100 cereals, most of which are imported, Keery has secured contacts globally already but is reluctant to disclose the finer details on the partnerships in place ? presumably for fear of copycat businesses opening up.

The fortnight-old business has already generated something of a cult following on Twitter and Facebook with more than 8,000 followers and 26,000 likes. According to Keery, the customer base has been 20 to 40 year olds. ?Judging from the past week and two days, we’re seeing a lot of eighties and nineties kids ? that’s when you got the free toys in boxes and we’ve tried to create a nostalgic environment with memorabilia and cartoons.?

Bowls of cereal are priced upwards of ?2.50 ? something that was questioned in a widely-covered interview with a Channel 4 reporter who suggested the costs are too expensive for locals to afford, at which point Keery halted the interview. He later took to Facebook to post an open letter in defence of the business, highlighting the attack contradicts everything Small Business Saturday represents, with the government-backed SME event taking place just days before Cereal Killer opened.

He also noted in the letter that there are plans to work with charities once the business has found its feet. Speaking to Real Business, Keery continued: We’re a startup, we need to make a profit first, but in January to February we’re going to look at supporting locals in Tower Hamlets by working with schools. This was always part of the plan.?

Despite the negativity, customers have been very encouraging. ?A lot of locals have come in and said you don’t need to worry, and we’ve had hundreds of emails of support, gifts and cards, it’s been phenomenal,? Keery said.

And based on what he said about store visits, business has also been phenomenal too.

?In the business plan, we said we were hoping for 120 customers a day, but we’ve been having 600 to 700 people in a day. We only seat 50 people at a time, so it’s incredible and we’ve been very overwhelmed. From 7am to 10am, things aren’t that busy, but the queue starts from then until we close at 10pm,? he detailed.

As for whether it’s sustainable, customer loyalty has already been witnessed. ?I think it is because a lot of people just don’t know what to order and they say they’re going to come back. We’ve already generated repeat business.?

Having launched in the final month of 2014, Cereal Killer looks to have a big and long year ahead. ?For the first six months we’ll concentrate on getting the model right, and if we can recreate it then we will. We don’t want to run before we walk or overkill the brand. I don’t think its going to have one on every corner like Starbucks, but there’s certain places it will work well.?

The company website hints that a catering and corporate service is on the way, and Keery shed some light on the idea. ?It’s not live yet because we want to see what our busiest times are to determine when we’d be able to offer corporate hire ? we’ll give it a couple of months and then see.?

?Next summer, the plan is to do festivals on campsites and have a food truck. We were initially starting small, looking to venues with 5,000 people, but big festivals have actually contacted us now. We have so many ideas and they’ve all been quite creative in terms of what we can do with the cafe and brand, so 2015 looks set to be a great year.?