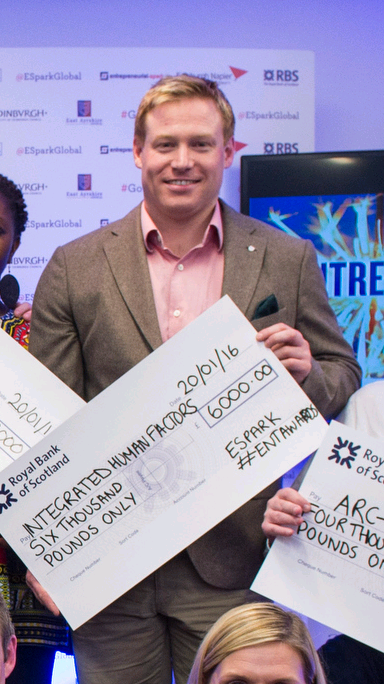 Clark is a man of action – a highly educated one too. Having studied both engineering and mathematics, he progressed onto the RAF as a military aviator and that’s where he become an expert in “human factors”.

At first blush, it may seem as though human factors are something you’d expect from a health and safety outfit, but there’s far more too it than that. “IHF operates in part in health and safety, but human factors are much more than just that though,” said Clark. “They’re about improving complex systems from a health and safety point of view, but also operational and performance points of view too. We look at complex systems to improve safety, performance and profit margins for companies.” Breaking the concept down, IHF’s tagline is integrating man, machine and environment. Clark explained that the problem is that companies become too reliant on tech capabilities, which outstrips the focus on the human. With the NHS as a client, IHF’s range of services – which support aviation, financial, healthcare, rail and oil & gas Industries – can help hospitals with new medical equipment to ensure that staff are fully integrated into the process. “Our speciality is looking at how humans perform,” said Clark. Always eager to learn, Clark found himself always questioning the way things worked and if there were better solutions out there, which he said would have been accelerated further through studying mechanical engineering and maths. “When I joined the RAF, working as military aviator taught me a discipline called human factors – the epitome of which can be seen by integrating pilots with the military aviation on planes,” he said. Clark secured a scholarship from the Scottish government to complete a human factors masters in Edinburgh, which enhanced his academic knowledge of the niche sector even more. That combined with with his tech background and piloting experience is what gives IHF a unique business proposition, he detailed. The launch of IHF itself came when Clark had a fortuitous talk with an oil rig owner during a conference. On the topic of operational issues, Clark heard “we have new incidents for old reasons” – a term he claims stuck with him, acting as something of a light bulb moment.

Although the business had all of the resources in terms of people and technology, mistakes were still being made. Clark recalled: “I said it sounds like a human factors issue, which usually has people fall into the trap of investing in the best of everything and assuming it will all be ok. That was effectively my entrance into the oil and gas market and he became a client.”

From there IHF was born and, unlike the journey for most companies, Clark found that plenty of interested parties were knocking at the door. However, that was a key, albeit unusual, challenge.

“One of the best, and worst, things to happen is that we haven’t had to go and get business. We started work, won awards and got invited to speak at conferences, then the BPs of the world knocked on our door,” he said. “That’s brilliant, of course, but it resulted in IHF not really having a proven method of going to get business ourselves. We lacked a business development process.” Looking to resolve the situation and help the company push on, Clark’s wife found business incubator Entrepreneurial Spark, which he claimed looked “phenomenal”. Since joining the programme, Entrepreneurial Spark has supported IHF’s development and helped the company to win awards, introduce a new system for fatigue management and secure the NHS as a customer. There are two main things that Clark truly appreciated in particular though; growth and confidence as a business leader and community spirit.

“Being an entrepreneurial leader is a lonely place and Entrepreneurial Spark gives comfort because you’re in the same place as people like you. The hatchery [incubator] is full of people in that same position,” he said.

He noted that having access to likeminded peers to share ups and downs with on good and bad days was invaluable.

Given the niche topic of human factors, we were keen to know just how knowledgeable business executives are on the subject.

“That’s a brilliant question, you’re right on the money. Originally, we were trying to sell human factors, but that’s like trying to sell mechanical engineering – there are so many facets to it. An engineer building boats is no good to someone building bridges,” said Clark. “If you’re selling human factors, you’re relying on people to understand and 70-80 per cent of people don’t know what they are. The irony is, 80 per cent of incidents are due to human factors, but people don’t know that’s the case.

“We flipped it on its head and we’re now selling new things. We can help in fatigue management, managerial changes, hospital waiting times, ensure ships and pilots meet regulatory standards, which makes it all a much easier sell.”

Entrepreneurial Spark helped Clark and the team come to realise that breaking down the services was the best way to move forward – something that’s difficult to do when you’re concentrating on the day-to-day management of a business. Read more about Entrepreneurial Spark: Clark explained: “Entrepreneurial Spark uses a business canvas, which is unbelievably valuable. ‘Who are your customers? Supply chain management? How much money are you going to make?’ You cover the very fundamentals of running a business and Entrepreneurial Spark brings the cold harsh reality of what your business is doing in into the light.” With human factors a very specialist topic, Clark conceded that competition is limited, while many health & safety services try to dress themselves up as human factors operators. In order to differentiate itself, IHF draws upon its military background, which puts human factors in its DNA; advanced training on the subject; measurable results and passion. “We are typical career pilots with lots of energy and we’re keen to know about clients’ sectors. Human factors is the glue and the clients’ operations the bricks – if you don’t have the glue then your bricks won’t stay up for long,” Clark said. Describing the internal philosophy, he added: “We look for self-starters and motivational people – they’re by far and away the two biggest qualities. “We used to say ‘one team, one fight’ in the air force and we try and engender that in IHF. Traditional qualities in military people are to work hard and play hard – we’ll face obstacles, but must work together to overcome them.” Looking ahead, Clark hopes to further work with the NHS and also grow the business in the Middle East where he believes there’s an opportunity for scale even larger than that found in the UK. He said: “Work in the NHS has taken human factors to health leaders. We’re helping to integrate incredibly competent people, and to be given an opportunity to help them help the UK is incredible and a real pleasure. Entrepreneurial Spark has been phenomenal and joining was a pivotal moment for IHF.” By Zen Terrelonge