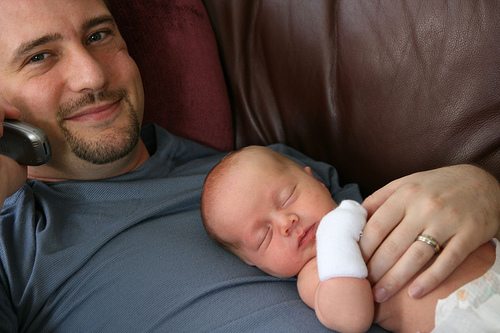 More than half of Britain?s working fathers want to cut their hours and play a bigger role in bringing up their children, according to a recent survey.

To address this issue, the government is planning to bring in new legislation by 2015 so that parents can share the 52-week “maternity” leave as they wish. Fathers are currently eligible for up to 26 weeks additional paternity leave (APL) but critics say the system is complicated and needs improvement. The measure has been welcomed by Office Angels? operations director, Angela Smith, who believes the UK needs a more flexible workplace where women and men share childcare duties. ?Concerns about work/life balance are often focused on women, but we?re living in a changing world,? says Smith. ?The UK is on the right track to creating a flexible employment structure, but concerns amongst dads around the stigmatism of working part-time show that society still has some way to go.? The survey, carried out by research company Opinion Matters, found that more than half (57 per cent) of the 1,072 working dads they questioned wanted to reduce their hours and spend more time with their children. It also found that dads who work full-time are clocking up long hours, with three-quarters (74 per cent) working 35-40 hours a week, and one in five (19 per cent) putting in 40 hours or more. Attitudes differ greatly among employers in different sectors. ?There is a lot of variation in how companies view fathers taking extra time off,? says Smith. ?It?s important to remember that dads also have a responsibility to make sure their employers understand the dynamics of family life. If they want to spend more time with their children they need to say.? The fact that fathers? motivations are becoming more weighted towards home life rather than economic factors auggests that dads are breaking away from their traditional role as the breadwinner, and shaping their role within the family. That being said, a whopping 70 per cent of the dad-respondents expressed a concern that society has a negative view on the “part-time working dad”. Over the past decade, substantial social change has affected the traditional working family. Our attitude to working ? along with how we organise our families ? has been influenced by the recession, changing workplace legislation, and evolving attitudes towards gender equality. It?s no longer unusual for a woman to be the highest earning partner in a relationship, so fathers are putting in a lot more time to bring up their children. Ruari Phillips is a recruitment entrepreneur & journalist based in Canary Wharf. Image source