Beef jerky. It’s a delicacy that has become almost synonymous with American culture.

Whatever your favourite American sitcom classic is, whether it’s Friends or Seinfeld, chances are that one of the main characters will be chowing down on beef jerky at some point.

And what’s not to love about beef jerky? It’s reasonably lean, protein-rich, easy to eat and preservable.

So for producers and consumers alike, it offers limitless possibilities, including its potential as an office snack item, or even (gasp) a post-workout superfood!?

So whilst beef jerky is undoubtedly an American concept, one British business has been brave enough to take this concept and produce a high-quality artisanal version for the UK, that company is called The Curators.

Here’s why they deserve commendation for what they have done:

Business success falls into two main categories when it comes to ‘types’ of entrepreneurs.  The first is the great creator, someone who has come up with an entirely new product or service. The second is the utiliser, someone who has identified a core product or service and has upscaled it to suit different markets, The Curators most firmly fall into the second category, and they should be proud of that.

The company, founded by friends Max Rees and Ed Hauck, were brave enough to run at the forefront of the UK’s burgeoning meat snack economy, a marketplace that is purported to be worth an estimated £143.2 million and is increasing rapidly.

They have used their market insights to identify and accelerate the popular consumer trend of beef jerky from the US by shaping it to suit the British consumer ecosystem through a culture-appropriate rebrand and an upscale in quality.

Only six months after their launch, the pair sell their product in stores as wide-ranging as Selfridges to Brewdog pubs and Sainsbury’s.

Let’s find out more about them…

This is not an entrepreneurial story based on hand-outs and hypothesising.

Instead, Rees and Hauck had spent a number of years in the food and business development industries, gaining crucial experience and cutting their teeth on a host of iconic brands, including high-end sweet treats company, GU.

“Max and I had been friends in the industry for a while. But we were first introduced by a mutual friend of ours who worked with Max at GU”, says Rees.

It was a blooming bromance in the making. With their shared passions for the treat economy resulting in many impassioned conversations, and even more evening dinners.

But whilst a friendship developed, so, Rees says, did their business idea…

“We realised we had a common passion for world food and set about developing a business that could bring that foodie flair into serious snacks”, says Hauck.

“We both love bold flavours so we wanted to upscale the beef jery prototype into something that would appeal to real foodies like ourselves. So that’s what we did,” he continues.

“The first product we developed was a range of beef jerky with big bold flavours including Sriracha and Espresso BBQ,” adds Rees.

After working in the snacks market for a number of years, both men felt that there weren’t enough high quality and flavoursome snacks on offer.

To gain some inspiration on what they thought these ‘foodie-friendly’ snacks should be, the pair made their way around London’s ever-popular food market events.

After frequenting foodie venues such as Meatopia, Kerb and Taste of London, they knew that high-quality savoury snacks was where they wanted to go.

“We then went on a research trip to the US in the summer of 2017,” says Hauck. “That’s where we were inspired by a raft of breakthrough brands taking the meat snacks category by storm,” he adds.

When they landed back in the UK, they teamed up with an interested factory partner and set about testing, tasting and learning about what would make a great piece of jerky.

“We ate a lot of jerky!” adds Rees with a knowing smile.

The perfect marriage of skills

Prior to life at The Curators, Rees had helped sell the Metcalfes popcorn brand to Kettle Foods, whilst Hauk was engaged in helping young businesses recruit and develop high-performance teams.

So you could say that their tried-and-tested skills were the perfect match for setting up a business that wanted to upscale and sell an iconic snack in a relatively young meat snacks market.

“Our skills and experience may be in different areas, but they mesh well together and have given us a strong foundation in our business”, says Hauck.

“We experience all the same challenges as other food start-ups, such as financing the journey, manufacturing the product and building distribution, but we are lucky to have 30+ years of experience between us which helps”, adds Rees.

So, the duo identified a product they could upscale and innovate for the British consumer market. So what came next?

It seemed that their vision carried real tangibility as they saw the launch of their business soon after they had devised their strategy, with the product dropping in January 2018.

However, a stumbling block came when they experienced an early set back with the production of the product.

“However, after much hard work, and a few sleepless nights, we successfully launched The Curators this spring in Selfridges and landed on supermarket shelves in August”, says Hauck.

“It’s been a roller coaster ride for sure, and the path hasn’t always been easy, but we are incredibly proud to be working with the retailers we are with and are incredibly grateful for the support from Sainsbury’s”, adds Rees.

So who says that interesting startups can’t work with the big boys eh?

Whilst deciding upon the product was all excitement and inspiration, physically developing and manufacturing it didn’t come as easy:

“The biggest challenge was to develop a factory process to manufacture the jerky products to a higher standard yet in an affordable way”, says Rees.

“What we didn’t realise was the technical difficulty involved in making meat snacks”, adds Hauck.

“We wanted to use the best ingredients possible, and include less sugar and preservatives than mainstream brands to help us stand out in the marketplace. But doing those things took time and consideration”, adds Rees.

On working as a team

“This has actually been relatively simple to navigate as we have quite different yet complimentary skills, and we respect each other a lot,” comments Hauck.

“We are quite clear on our roles and our natural strengths. For example, Max handles the more operational side of the business, whilst I focus on sales.” – Ed Hauck

“Maybe it comes with a bit of experience but it hasn’t been our biggest challenge to work all that out”, says Rees.

“We’re both very passionate about the brand but also about the team and collaborate well to develop both. There have been no arguments yet!!”

On launching vs next-level growth

“The early days are very very hard. It’s a huge commitment financially and personally and can’t be underestimated”, says Rees.

“It’s vital to have a good team but you also need a supportive family. It’s often the people you don’t see who are most important,” he adds.

“As founders, we often feel like we’re islands, so we do need a lot of support when we can get it,” adds Hauck.

“However, once you’re through the launch phase it’s no mean feat getting the brand to scale.” – Ed Hauck

“Within a competitive snacks market like the UK, and in the midst of a challenging business environment created by things such as Brexit uncertainty, it was always going to be a challenge to grow to the next stage”, says Rees.

“We are incredibly excited about the next phase of the business as the early teething pains are now behind us,” he adds.

“The brand is landing well and with our experience, we believe we can build a really successful business for the long term”.

On coping with the burden of entrepreneurship

When I ask the duo about what their ‘darkest moments’ have been since launching the business, they are thoroughly sanguine and down-right matter of fact in their response.

“Founders and business owners will be exposed to stress on a daily basis. We definitely need more support in this area be it through government help, access to therapy, coaching or mentoring. –  Max Rees

“As for dark moments, we have them every week! Some are worse than others but we always find a way through,” says Rees.

“To be an entrepreneur, you have to develop a thick skin and not over dramatise the problem. There is always a solution somewhere. Equally, you can’t over celebrate the wins either!!” adds Hauck.

“It’s vital to have other things in your life too, whatever they might be, as sometimes it can feel like the business has taken over your life”, says Rees.

“Mental health issues are a huge issue in our society and stress and anxiety is a big part of that. As co-founders, we are very dependent on each other, but it’s critical to lean on friends and family for moral support.” – Ed Hauck

“For us, it’s normally some sort of sporting activity or a personal challenge. Becky, our Marketing Executive, is running the London Marathon next year which is amazing, and I’m trying to be less horrible at golf. A quiet pint with our mates at the end of the week also helps,” adds Hauck.

“Whilst we feel we’ve achieved a lot, we still have a long way to go as, in the big scheme of things, we are still an unknown brand”, comments Rees.

“However, we will be spending the months (and years) ahead going to sports, wellness and food events all over the UK to introduce The Curators to anyone who wants to know!”

So next time you have some beef jerky, raise a piece or two to the co-founders of The Curators, for you may well be holding their very own brand in the palm of your hand… 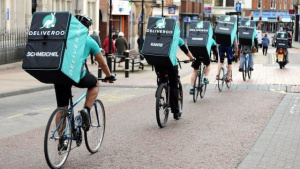 Deliveroo is not delivering the goods for gig-economy employees, according to latest court ruling

The Apprentice 2018, Episode 10 review – What “real” entrepreneurs think of the candidates this week