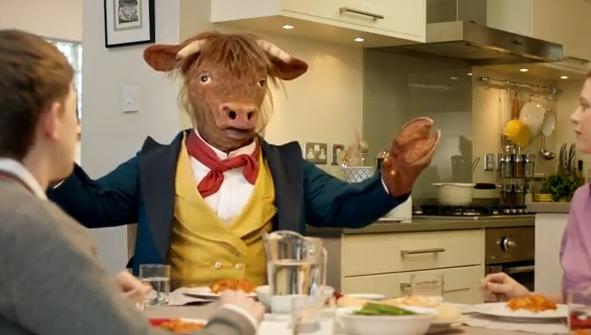 Now I appreciate that the Colman’s logo features the head of a bull ? and it is easy to see how someone at the ad agency arrived at the idea of bringing the bull to life. Last year’s ad featured the bull jumping out of a gravy boat and doing a funky little dance in anticipation of being poured over the Sunday roast. This year’s ad, to promote the company’s Season & Shake range and its new Chicken Tikka Masala flavour, sees the Colman’s bull logo transformed into an eccentric life-size character who joins a family for dinner. Pretty sick when you think about it.

I am not a big fan of Paul Whitehouse and these painfully clunky and unfunny ads from Aviva do nothing to change my opinion. The latest iteration features Paul?s character spending the savings he?s made on his insurance on a new set of headphones for his metal detector, only to have his metal detecting ambitions thwarted by a cowpat. On reflection, it may be unfair to blame Mr Whitehouse; John Cleese himself couldn?t raise a laugh from these scripts. To see how it should be done, the marketing team at Aviva need to check out the campaign from Direct Line starring Chris Addison and Alexander Armstrong which is simple, effective and funny.

I suspect I am in a minority in not liking the Guardian?s “Three Little Pigs” advert. It is, without doubt, clever and well made, celebrates the title’s analysis and investigative journalism and (I?m sure) ticked all the boxes in the advertising brief. But it would have been far more powerful if they had used a real story as an example and invested the money saved on production in high-quality editorial.

The previous campaign from Harveys (“Bringing your home to life”) was rather good???remarkably so in a sector notorious for its dreadful advertising. Sadly this is not the case for the furniture chain’s new campaign and accompanying Coronation Street sponsorship. It features an unpleasant woman whose obnoxious behaviour towards her long-suffering husband would lead to a flood of complaints to the Advertising Standards Authority if the roles were reversed. Not the sort of spokesperson most brands aspire to. Frances Brindle is?director of strategic marketing and communications at?the British Library. What are your worst ads of the year so far? Post your comments below.