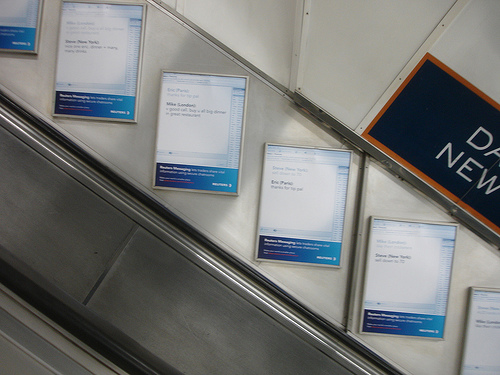 For the uninitiated, programmatic marketing is the practice of delivering ads in real-time to a highly targeted set of consumers. The technology behind it is based on advanced learning algorithms that crunch vast pools of data about people using the internet and then feeds individuals (not audiences) ads tailored to their behaviour. All this happens in nano-seconds.

The technology originated with desk-top display advertising, such as the ads you see around websites as you browse, but is now evolving to include most of the marketing or advertising youll receive on your mobile or tablet computer and already includes Twitter and Facebook marketing.  As more and more media from news and magazine publishers, TV, radio and even poster advertising become internet connected and increasingly absorbed via the internet, so programmatic marketing will become more and more the norm. The big driver behind programmatic advertising is cost and efficiency. The current form of broadcast advertising, where large groups of people are hopefully reached by a TV channel or newspaper has always been very wasteful think of the old saying: I know 50 per cent of my advertising works; I just dont know which 50 per cent . Programmatic advertising doesnt broadcast. It micro-casts to the individual and it can be changed instantaneously to improve efficiency depending on the behaviour or reaction of the individual. That individual is not known, they are anonymous (programmatic advertising conforms with EU privacy regulations), but they are classified by their behaviour. Whats more, in the future, programmatic marketing may not be confined to what we think of as media channels. Already youll see programmatic marketing on retail sites, search and a plethora of other digital services, but over the next decade or so, this kind of smart, relevant brand messaging might reach us through connected devices in the home or high street; the so called internet of things . So a decade hence how might programmatic technology have changed our daily lives  To give you an idea, lets take a look at a day of a typical 30-something professional living in London. He likes to keep fit and gets up every weekday at 7am to go for a run. On this particular morning he returns from his normal four mile route and checks his running app to see how quickly he finished the circuit and compare this to previous performances. Nike might congratulate him on his time as he does. As often happens when you’re a frequent jogger, his trainers are beginning to wear out at the soles. Luckily, his running app is synced with a sensor thats embedded in the rubber of his trainers, so the app is able to warn him when he needs to think about purchasing a new pair. Leaving the house soon after, he puts on his glasses (integrated with Google Glass technology) and starts browsing for a new pair of trainers. He sees display ads for Nike but decides to ignore them and look into New Balance trainers that have caught his attention. He walks through the barriers at his local tube station and steps onto the escalator. As he travels down, the RFID chip (Radio-frequency identification) in his glasses transmits his unique ID to digital billboards, which are able to decide what ads to show at any given moment based on the aggregate data of the people in the area. He sees another ad for Nike and the recognition of the brand and product starts to register with him. When he finally arrives at work, he sits down at his desk and starts to read his emails. A radio is playing in the background and, like the digital billboards on the tube, it is registering the IDs of all the people in the office and making decisions in aggregate about which ads to play. At 1:30pm, he breaks for lunch and decides to go shopping heres where the possibilities of programmatic really could transform our experiences. Imagine if a store could use our subjects data and ID to create a physical product almost instantly. 3D printers are already used extensively in manufacturing and it won’t be long before they become more widely available. So, as he strolls down Oxford Street, the Nike store picks up his ID, queries his data and makes the decision to print a basic mock-up of the shoe he has paid most attention to throughout the morning. He sees the same model appear in the shop window, which successfully tempts him into the store. Of course, all this will be music to the ears of brands. Being able to identify in real-time the person who is most likely to buy your product or service can save millions of ad dollars and dramatically boost ROI. The consumer, on the other hand, might not be quite so enthusiastic, not least because of natural concerns over privacy and data. Giving more control to the consumer, and even allowing them to price or trade their own data, will become a vital new area for marketers to consider. And there will be technological challenges to overcome too. Currently, because of the limitations of the cookie, marketers are unable to effectively track consumers beyond their desktops. But expect unique device identifiers UDIDs to emerge in the near future that make the dream of a universal cloud-based cookie described here a reality. If all this seems daunting, dont worry. Even in the marketing world, many people are still getting to grips with programmatic.  But, make no mistake it represents the future of advertising. Brands that fully embrace it now will reap the rewards. Martyn Bentley is regional vice president, UK, at programmatic advertising platform, Chango. Image source