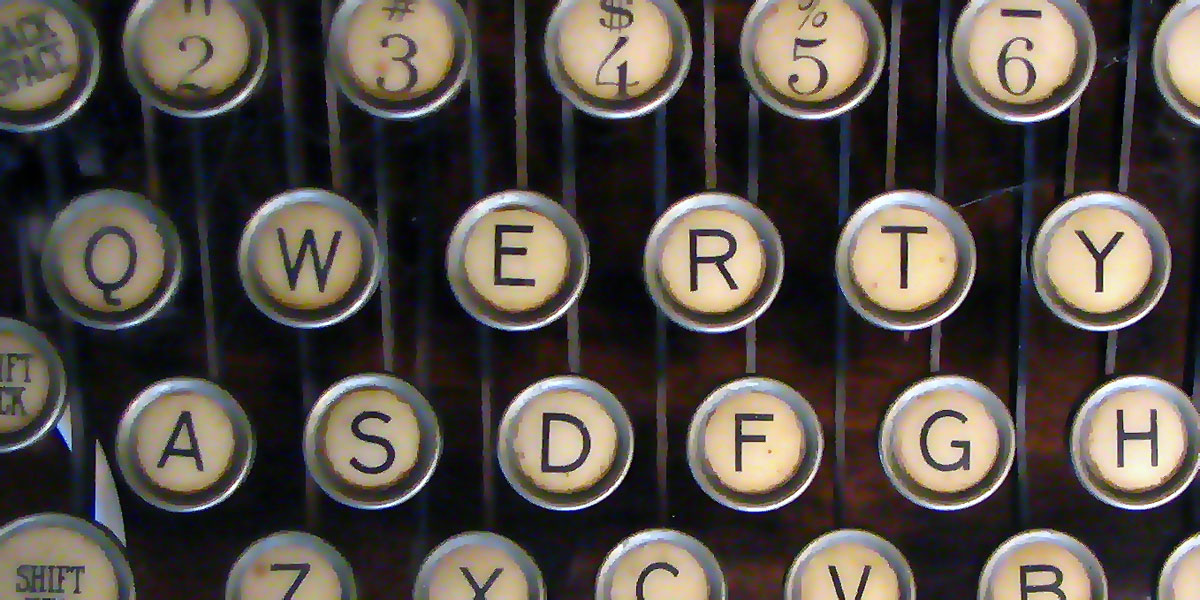 The first typewriter was patented 140 years ago, four years later in 1878 – QWERTY was patented.?

The primary reason for the original layout – the one which we still use today – was to prevent the bars from jamming as they went to which print the letters. Even as we’ve moved from typewriters to computers, the QWERTY layout has stuck with us.? A lot of people say that it’s out of complacency. Actually,?Remington – the company who first released the typewriter – also wanted it to encourage the use of two hands.?Indeed if you watch your hands as they type: you don’t bias either hand as you write a sentence. QWERTY works. But does it work well? Smartphones have made the relevance of this typeface questionable. Because of their small screens, having large fingers has become a handicap – and if smartwatches take off: it’ll make finding an alternative to QWERTY a priority. There are already a lot of players in this space. Swiftkey, which has become enormously popular on Google Android – with 10m downloads – doesn’t replace QWERTY but with its learning algorithm wants its users to use text prediction instead of typing. Users swipe across the keyboard, creating each word without lifting their finger from the screen. The best hope is that as the algorithm learns word, phrasing and language preferences it becomes just a case of selecting words in a line-up. But what about actually getting rid of QWERTY altogether? 8pen has created an ‘X’ interface which changes the typeface into 4 quadrants, which are filled with letters and numbers. When you select the quadrant with letter you want, those letters blow up to allow you to type more easily. There’s also some word prediction and finger gestures are also important for frequently used phrases. As might be evident, it has a steep learning curve. However, what’s especially interesting about 8pen is its leaving behind QWERTY – because it can use touch technology instead. Touch has been recognised as an innovation which has changed the way we interact with electronic devices – for instance, it has enabled the pinch-and-slide interface patented by Apple. And it holds huge potential for typing because of how the interface resembles writing on paper. A great example of this is writing in Chinese on the Apple ‘Magic Trackpad’. Apple desktop and laptop computers both come with the trackpad, which typically can be used as a mouse. But the trackpad is fitted with sensors to allow pinching, sliding and – useful for writing Chinese – drawing. To write in Chinese all you have to do is trace the character with your finger, and the computer estimates what word you were going for. This works especially well in Chinese because, unlike English, the words have to exist within a finite space (a box) and each stroke is written in order: which helps the computer algorithm guess better. It thus decreases the variables inherent in writing in a Latin typeset, like English. So what’s the answer for the vast swathe of the population that write using a Latin typeset? 5TILES, a London-based startup, have built a type-interface and algorithm which allows you write words easily and quickly for small screens (as long as you have an Android phone or Samsung Gear Smartwatch).

The 5TILES interface has 5 chromatically-coloured tiles which sit in a half-QWERTY keyboard – the same typeset used on mobile phones. You press one tile, say: ABCDE; and each tile turns into one letter. You then slide to your chosen letter. If this sounds like a lot of work, check out the video: Founder Michal Kubacki says he thought up the idea when he was a writer living in Italy. Back in the early 2000s, he felt the creative impulse at inconvenient times – like walking in the countryside – and found the QWERTY keyboard on a smartphones wasn’t conducive to the creative process. 5TILES was founded in part to allow him to do that. His technology makes deft use of a touch interface as it relies on the sliding and gestures we’re familiar with in apps and tablets – functions that weren’t available?on feature phones, the keyboard or, of course, typewriters. So is touch making a difference to an ineffective typeface? QWERTY was created to prevent typewriter bars from becoming tangled – now we don’t have that problem, but we for 140 years later we lacked a better solution. Touch interfaces could be it. Image source Are you an innovative digital business leader? Enter the Digital Champion category of this year’s Growing Business Awards. Nominations are open now and will close on the 19th September. For more information and to submit your free nomination, visit the Growing Business Awards site.