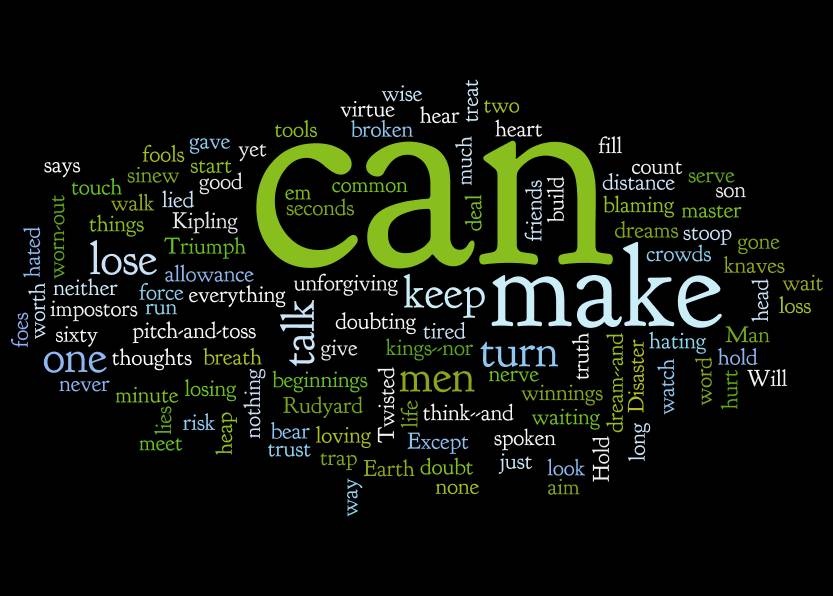 If you can meet with Triumph and Disaster
And treat those two impostors just the same;

It points to the relationship between inspiration and desperation, which rarely becomes clearer than in tough times. When you are under pressure, the things that are best and worst about people, the things that are best and worst about businesses, come to the fore. We?ve all been there. Pushed a bit too far, been a bit too snappy, the world against you. Truth is that these things happen to us all but that?s not the interesting part; it?s the response that really does, in my opinion, pick the winners from the losers. What strikes me, though, is that many businesses don?t understand the relationship between what they do and the customer response. Your food is late at a restaurant; a company fails to honour its obligations to you as a supplier. On and on, it?s amazing how many of these businesses fail to accept the rap for their own actions and want to blame the poorly-served customer instead. Simply put, no business has a divine right to survive, but what is striking is that many companies behave as if they do. When the wise say that “the customer is king”, they do so for a reason and more companies would do better to remember that. As the economic climate becomes ever tougher, businesses are dividing into two clear camps: the inspired and the desperate. The desperate see life in terms of a blame game. Anybody else?s fault bar their own for the situation that they are in. And it?s a sad road because in the end it leads to business failure and collapse. From the macro to the micro, from the corporation to the cobblers, these are the businesses that will find the excuses to say enough is enough, that tough times are just too much. But there are also the ranks of another emerging army; one that sees downturn as a potential for personal upturn; one that revels in the opportunity presented by a depressed commercial environment. These are the unreasonable optimists, those who watch the news and decide that the Greek bailout has little to do with a software developer on Silicon Roundabout; those who believe that they can trade their way out of problems through great services and products. These are the businesses that I feel most at home with and when you are with them you wonder if there can be any other type of entrepreneurial business that can exist. Just last week I chaired MADE: The Entrepreneur Festival in Sheffield where an abundance of life?s optimists gathered in one place at one time. The enthusiasm, creativity and inspiration was electrifying; generate that and we would be accelerating the UK to a very positive place. But not everyone sees it thus. Life is tough, optimism is irresponsible and hope is frankly hopeless. This is the world of another poetic epic, Dante?s Inferno, ?Abandon hope all yee who enter here.? The problem with this world view is that it takes the undoubtedly tough times we face and turns them into an excuse to give up, accept second best, do something not quite so well. What?s the point? We?re all screwed anyway and what?s more is that it’s somebody else?s fault. Trouble is that the vital ingredient of personal responsibility does not play its part in this stark story. What could I have done to do a little bit better, to be a little bit more competitive or a tad more innovative? Blame Jose Manuel Barroso, blame the Prime Minister. It doesn?t really matter, it?s ok, blame anyone ? this is blame game, room 101. Many claim that an entrepreneur isn?t an entrepreneur until they have stared failure in the face. In the States they call it the million-dollar MBA, the ultimate learning experience. I go along with this to a point, but in my view real entrepreneurs only fail by other people?s judgement, not their own. Bankruptcy, product failure, market shifts; these may well create a crisis in a business or the life of the owner but it is only when you accept it yourself that it becomes a real failure. Until then, these are merely the learning curves, the opportunities to learn lessons, to get better. These are the marks of the true entrepreneur and why the true entrepreneur responds with inspiration while others flounder in despair. For inspiration I would return to IF:

If you can fill the unforgiving minute
With sixty seconds’ worth of distance run,
Yours is the Earth and everything that’s in it,
And – which is more – you’ll be a Man, my son!

Kipling gets a bad rap among many but to me his words are as sharp and poignant to the lives of those on the front line of building businesses as they were when he wrote them in 1895. Michael Hayman is co-founder of the public relations consultancy Seven Hills. You can also follow Michael on Twitter.