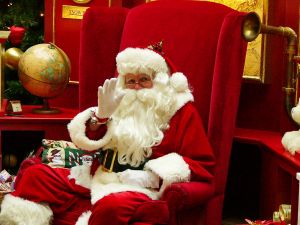 Apart from it being in the title, you probably didn’t see that one coming. But, as business coach Shweta Jhajharia so aptly puts it: “One of the most effective ways of learning is to mimic the best.”

And when it comes to encouraging us to buy, Santa Claus is most definitely up there among the very best!  In fact, the UK spends an average ?568 per person at Christmas. You’ve got to admit, that’s pretty hefty spending that Santa’s managed to rack up. And he gets some amazing perks while he’s at it: milk and cookies galore at every house! As a side not, however, squeezing into fire places or finding ways to break in without sounding the alarm when they don’t have one, is probably one of his least favourite things. So how does he do it?

You run down the stairs on Christmas morning and the presents?aren’t there. “There’s no way you won’t be confused, angry and disappointed,” says Jhajharia. “Promises were made ? and broken. You’ll start to dislike and distrust Santa.”  So far Santa hasn’t let the world down. He simply doesn’t make this mistake and nor should you. “If you don’t deliver as promised, your marketing isn’t going to help you,” Jhajharia adds. “In fact, it’s going to ruin your reputation. So make sure you’ve got a secure delivery system in place.”

Santa is widely loved by people because, quite simply, he has a big bag of toys. If you think about it, he’s always handing out gifts, and who doesn’t like free gifts or samples? Take note of how your marketing messages sound. “Do you sound like you’re trying to get something from your customers?” asks Jhajharia. “Bring the value that you’re providing your customers up to the front and centre. Deliver value year round and you’ll earn loyal customers that come back to you over and over again.”

Santa is the king of lists. He doesn’t only have one though, he has a naughty and a nice list. He also check them twice! And as populations slowly increase, his lists get bigger and bigger – so should your customer data base too.  “Santa has been gathering support for years,” says Jhajharia. “Constant building of your list is important. But it’s also important to qualify ? who are the nice ones that deserve your best gifts?”

Santa has arguably one of the most recognised uniforms in the world! He is the master of branding and he wields it well. This is both the bane of many parents who have to queue up when a child spots him in a mall, and a wonder to the malls who make money from it, or the parents who get to calm their kids down so they went rush around aisles asking for toys. But what is it about your company’s branding that makes it instantly recognisable? “You need to have something,” Jhajharia explains. “A uniform, a logo, even a colour! If you claim something as your own then people will immediately recognise it as yours. Only then can you be constantly visible without even being there personally.”

Santa is amazing when it comes to rushing around the globe all in one night, but of course, he doesn’t actually all of the work himself. Admittedly, even he would struggle.  “About four days of the year he’s on top of it, but for the rest of it he’s relaxing,” said Jhajharia. “How? He has representatives in every shopping centre drumming up the crowds, mums and dads delivering the gifts, and the elves making and packing. He has clear systems in place that run without his direct input. “Make it your mission to systemise at least parts of your business. Hire a hardworking team to make you look good (your elves), create a great delivery process (your reindeer), run repeatable self-promotion events (shopping centre representatives), and create autonomous groups that can manage things locally (the parents).”

Although I’m sure many have tried, it’s sadly  impossible to get a direct line to Santa Claus. Jhajharia explains that it’s because “he’s far too important to be that accessible. Even if you write to him the elves will screen the letter and if they can deal with it in the factory, Santa never needs to be bothered. Only the most important of messages get through.” Remember, your time is incredibly valuable and precious. So customer service is absolutely critical. There should be someone else answering the phone, screening calls and bringing you only the most important things. “The man in the big red suit has a bit of a head start, but it isn’t actually that hard to grow big fast,” suggests Jhajharia. “Learn from the best, implement the right tools and strategies and you could be relaxing in your own North Pole before long, while your elves get the work done without you.” Image source By Shan? Schutte