Skip to content
HR & Management
Share via
Sleep deprived Brits cost the UK??40bn a year, think tank Rand concluded?after looking at the workplace habits of?62,000 people across?five nations. Another offered statistic claimed those sleeping less than six hours?lost on average six working days due to either absenteeism or presenteeism. This is in large part due to stress of the working day following workers and bosses alike home, with another study, from Travelodge?this time, suggesting corporate worries?kept 40 per cent of the population awake at night. Further research connected the dots between the daily commute and sleep, placing emphasis on how?our already tired minds from a lack of sleep struggled waking up early as well ? and it left no real time for anyone?to break free from the constantly “on” mould. Jawbone?s research expounded the fact: ?Long commuters go to bed earlier, wake up earlier, and sleep less on weekdays than non-commuters. As the commute becomes longer, the differences become more pronounced. “Of course?sleep deprived Brits try to stay in bed?as long as is deemed appropriate over the weekend, but a constant tired state can lead to sluggish behaviour when time is suddenly made available. And unlike with sleep, long distance commuters do not make up their comparative movement deficit on weekends.? What’s more, specific commuters are more sleep deprived than others. Direct Blinds took a look at the number of passengers passing through a train station, how many took the earliest trains, not to mention how many trains left the station each day, in order to find out where the mot?sleep deprived Brits could be found. Despite what one may think, the nation?s busiest?station?overall, Waterloo,?came?second to London Bridge. Its?135,665 passengers?left the station between 6.30am and?8.30am, offering a higher proportion of early trains than most stations ? twice that of Waterloo. David Roebuck, managing director of?Direct Blinds, said: ?We were surprised to see that one station stood?out as much as London Bridge.?We thought Waterloo?and Liverpool Street would be higher, but?they were behind in our calculations. It does seem though that those?in?the capital need a caffeine hit to keep them going throughout the day. ?There was also a strong North/South divide. Those from?the North were?able to get close to the recommended eight hours of sleep, whereas in London, the way of life in the capital may?explain why commuters are?having to catch the earliest trains for work, which is costing them time in bed.? So which stations had the most sleep deprived Brits step on its platforms? 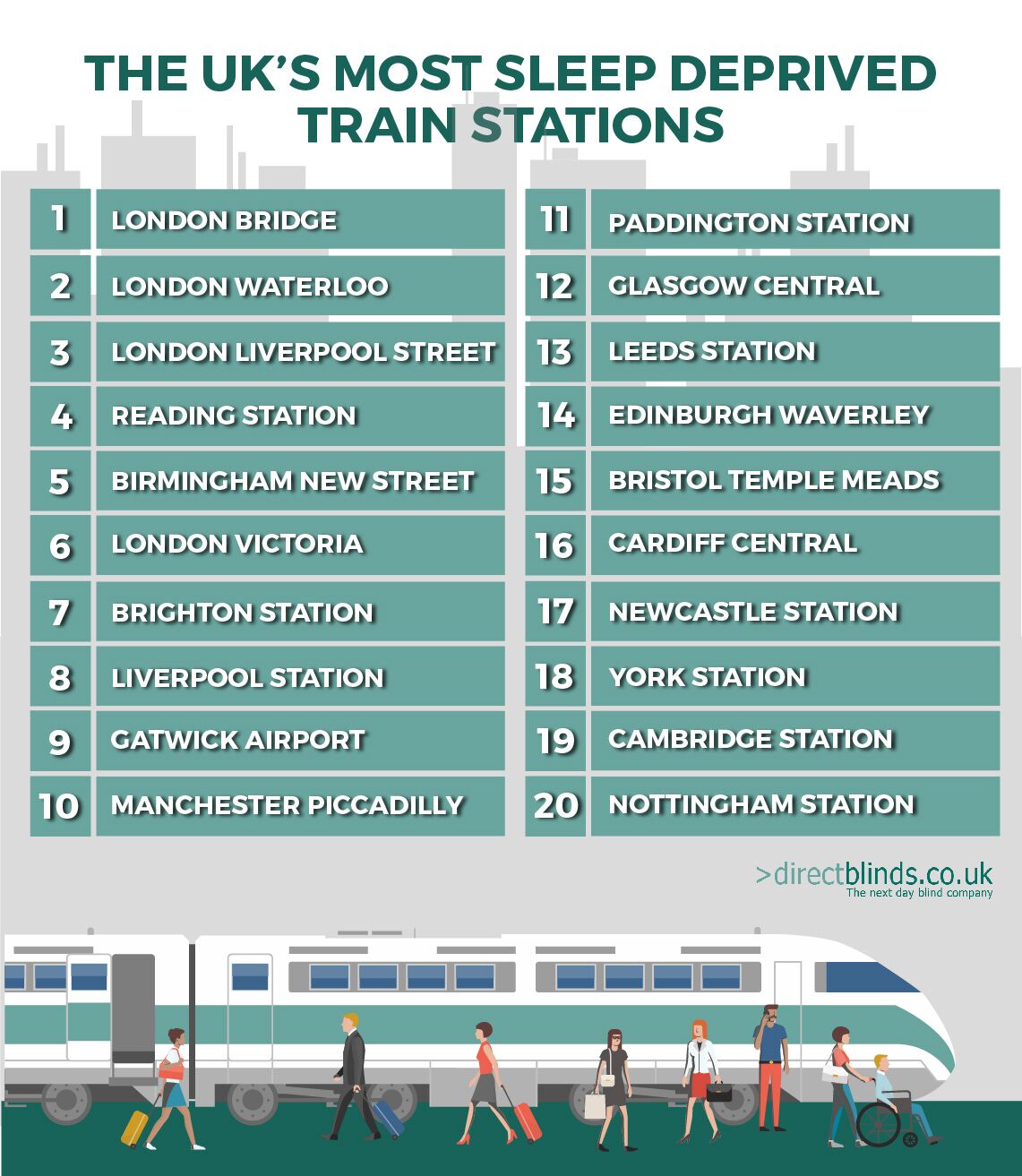