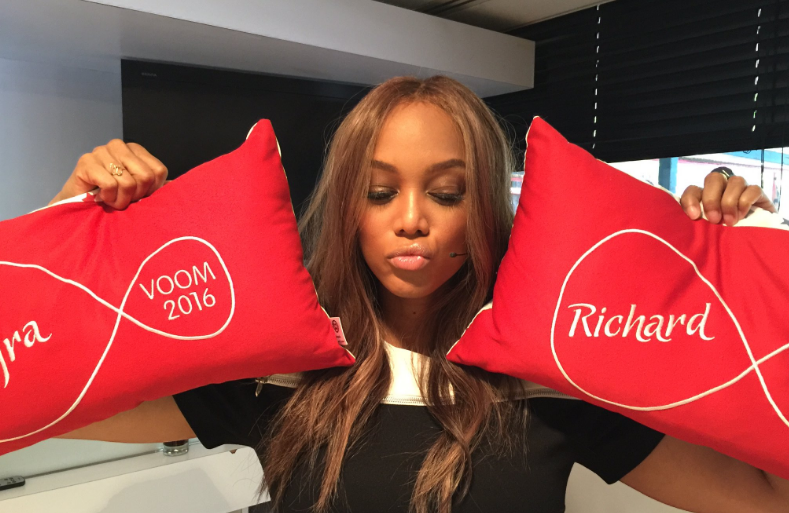 The winners of VOOM 2016 were MacRebur, which recycles waste plastic into roads, for the Startup category and Bio-Bean, which converts waste coffee grounds into fuel, for the Grow category. Both of the firms claimed a share of the £1m prize fund to win:

Tyra Banks was one of the judges sitting alongside Richard Branson to decide the fate of the finalists. In addition to supermodel status, she is also a successful businesswoman, having established fashion reality TV series America’s Next Top Model, which airs in 186 countries. Additionally, drawing upon her modelling experience further, she created cosmetics firm Tyra Beauty. Speaking to VOOM host Konnie Huq, Banks spoke of her entrepreneurial spirit – something she said had always been inside of her. “A lot of people look at the modelling industry and say ‘oh, those girls are born that way and become supermodels’. But there’s a heck of a lot of models that looked way better than me. I look at my old pictures and I’m like ‘damn, how the hell do you supermodel?’ when I look at all these other girls that were great.” She claimed that “supermodels are made, not born,” and added “it’s not just about a look or a walk.” Highlighting a determination to forge a niche in the industry, much like a business looking to break into new territory, Banks said there was strategy behind what she did. “It really is about a strategy and looking at the white space and saying okay, what’s not there? How can I penetrate? How can I stand out? So it’s very deliberate,” Banks said. “I was a very skinny high fashion runway model when my body started to change and, instead of dieting and working out like crazy, I ate burgers and pizza and said ‘okay, who likes ass?’ I made the list of Sports Illustrated and Victoria’s Secret. It was really very strategic, so I always had it in me to fight and find a way.”

She also had some tips for tackling public speaking and executing a successful pitch and encouraged body language.

Banks continued: “Speak with your hands. It really gets people engaged and tells a story. Speaking with hands really helps when you’re nervous. If you’re speaking with your hands it pulls away the nerves and moves the energy to create a story with your body language.” Closing on another trick up her sleeve, she said: “The other thing is be present. As much as you’ve memorised your pitch, if something happens in the room, if somebody heckles or if I burp, react to it and then go back to your pitch. Stay present and stay in the moment.” So there you have it, model your business the Banks way and the story of your success could be a beautiful one. By Zen Terrelonge David Gandy was a judge on the VOOM 2015 panel and we looked at how the British model was changing the face of business and investment.