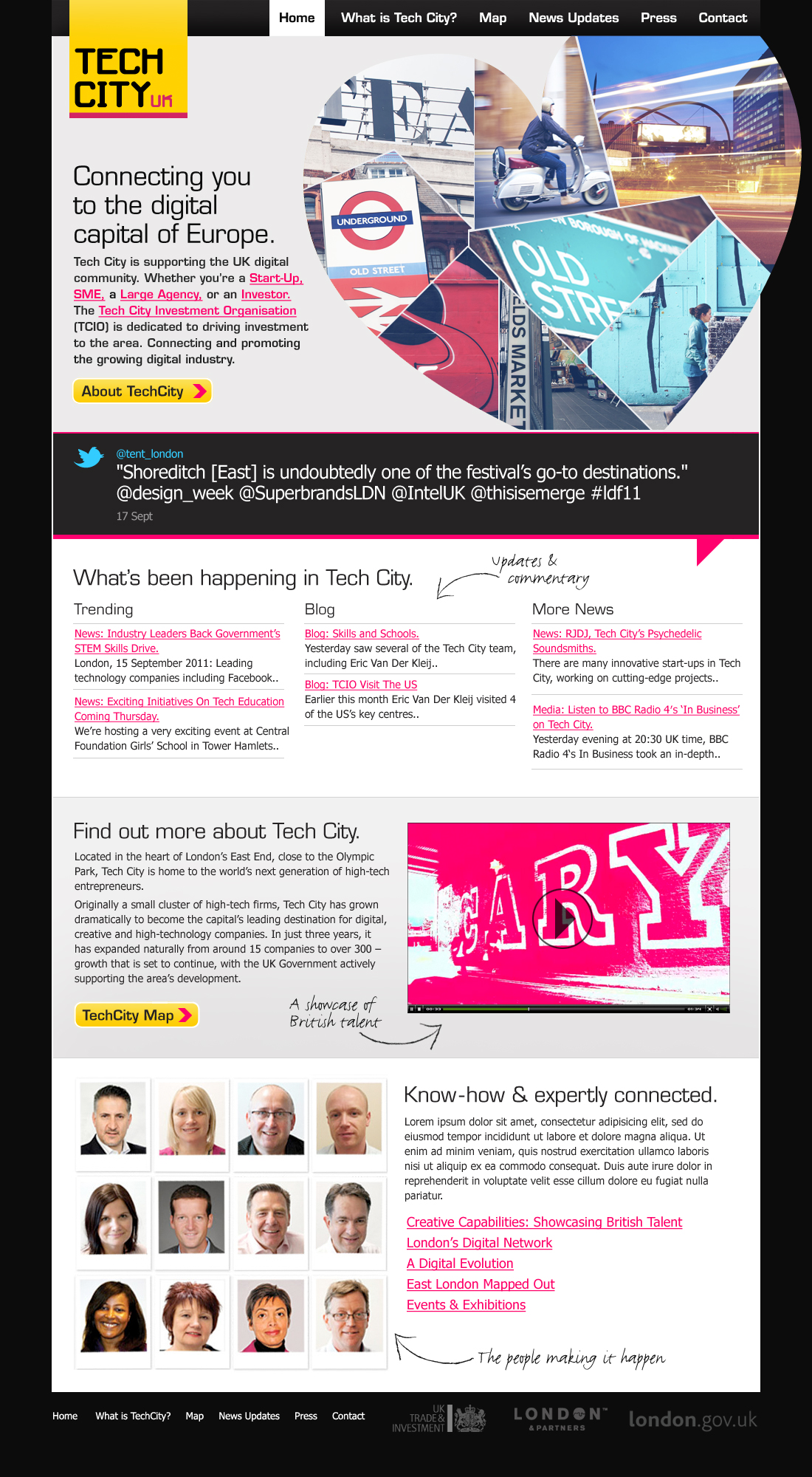 Here at Real Business, we’re all about constructive, helpful advice. That philosophy extends deep into the recesses of the organisation, as far as talents in the company like designer Amy Willoughby, who, when she read some earlier stories of mine about UKTI’s Tech City website, suggested we present an idea of how the site ought to have looked.

“I was perplexed when I first entered the Tech City site,” writes Amy. “Aside from the obvious copy blunders throughout, there are too many fundamental UX [user experience] and interface flaws to ignore. Even on a small budget, these failings would be inexcusable.” Amy brings her expertise to bear on some of the strange design decisions UKTI’s agency, which was chosen despite having little experience of web design, plumped for:? “With the Tech City UK website, once you’ve finished grappling with the wordy introduction, you then have to start battling with fancy naming conventions in the navigation. The top level hides other more important clues within. “‘About Tech City’ lists ‘What is Tech City’ but doesn’t actually click through to anywhere itself: why use both? Surely they want people to find out as much as they can about this enterprising initiative without having to beg for it? “There are other problems, too: the organisation of this site as a whole, particularly its information architecture, is complicated and confusing, when it needn’t be. Given the subject matter of the campaign ? technology companies ? it ought to have been a glittering beacon of good design and lean coding. “It’s blisteringly old-fashioned. There’s even a menu that, astonishingly, is made of images instead of text. Shouldn’t these items have been left in HTML? They are currently invisible to search engine results. How does UKTI expect the site to be discovered? And does this really do a good job of representing the ‘digital capital of Europe’?” Finally, Amy considers the usability of the site. “There are certain usability and GUI [graphical user interface] methods every web user will be familiar with by now, meaning that a user’s experience of a website should be intuitive and flowing. Unfortunately, this site bears very few of them.? “The most basic examples we found were in the first few minutes of being on the site. It’s a tried and tested function that the logo should link back to the homepage. It doesn’t ? and fair enough, preferences vary ? however other links on the site also appear unconsidered and not user friendly.? “The masthead banner clicks through to a contact page, with only the words ‘Find out more’ to give you a clue that you might be redirected. But white text on yellow? I’m pretty sure it’s obvious this isn’t a good combination for anyone with a low contrast monitor or those who don’t like to squint!” Amy’s final verdict? “I don’t think the site is remotely good enough to showcase one of the most prolific media quarters of the UK economy. It certainly doesn’t justify the budget.” Of course, design is a subjective thing, and there will be many readers who think our suggestion inadequate, inappropriate or undesirable for a variety of reasons. But Amy won’t mind me saying that her mock-up isn’t the result of weeks’ worth of painstaking wireframing: it’s a relatively quick stab at something better than the laughable incumbent design. And that’s just the point I’ve been trying to make over the past few weeks, isn’t it? UKTI could and should have spent a fraction of the ?55,000 they did on the Tech City website.?Eschewing the design by committee approach that inevitably leads to disaster, someone within the Tech City Investment Organisation should have taken charge of the project and shown a bit of leadership. They should have hired someone talented who wouldn’t charge them an arm and a leg for deeply mediocre work. (They should have hired someone like our Amy.) So we offer this not necessarily as a definitive proposal to replace the existing site, which is clearly not fit for purpose, but rather as a demonstration of what is possible, on a very modest budget and in a short space of time, when one pays adequate attention to thriftiness and, more importantly, good design and clear thinking. My pinstriped, cigar-smoking overlords here at Real Business tell me that the magazine stands ready and willing to assist UKTI however we can in reimagining the Tech City website. UKTI need only outstretch a hand.