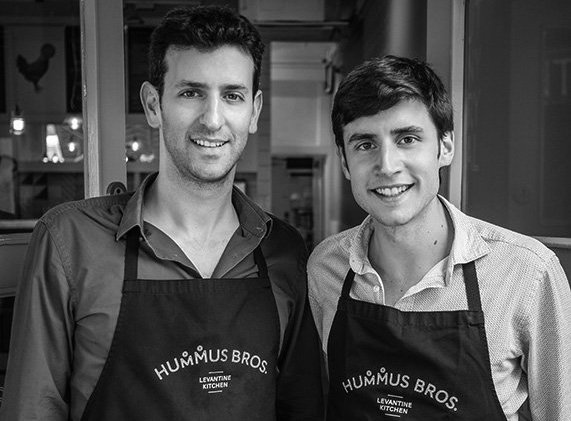 As someone who went to Cambridge University to study economics and computer science, starting a chain of restaurants championing top-quality hummus is perhaps not the route many would have predicted.

But for Mouysset and co-founder Ronen Givon, they saw a gap in the high street market for a restaurant that served cheap, healthy, easy to get and filling food.

Their first step was to take their freshly made hummus to farmers markets, with punters at Truman Brewery and Hampstead Market the guinea pigs early on. “When we realised people starting missing us when we weren’t there we thought we must be on to something,” Mouysset told Real Business.

The year was 2005 and the banks were quite helpful, he reflected. “We were 23 or 24 and went to the bank with our presentation. Our awesome HSBC banker said they’d fund us, which we thought was amazing. Today, after all of the financial crisis, I don’t think they’d do it.”

Hummus Bros the business now has four retail units, and wants to be seven-strong by the end of 2015. Alongside that, Mouysset and Givon have tapped into a demand for popups in corporate restaurants – with 350 completed during 2014.

The business is generating £2.3m in sales right now, from locations in Soho, Holbourn, St Paul’s and Exmouth Market, but Mouysset is not content with that. So that seven sites are open and serving by the end of next year, double the number of corporate popups are completed and sales hit £5m, Hummus Bros is turning to crowdfunding.

Currently in the midst of a crowdfunding mini-bond, offering “investors” an annual 8 per cent interest rate payment, Mouysset also hopes it serves as a way to introduce new customers to the food chain. A target of £375,000 has been set which will, alongside the new sites and corporate offering, finance the purchase of food trucks.

“Some buildings just don’t have canteens in them, so we’re getting a truck so that we can stop outside of them,” he added.

Being a profitable business meant that Hummus Bros has previously been able to tap into the venture capital and angel community for funds. But rather than go back to the banks, which Mouysset believes just aren’t issuing loans to small businesses because of the cost associated, he’s embracing the rising trend of alternative finance. And, like John Lewis, Hotel Chocolat, and more recently fellow food chain Chilango, it’s the mini-bond option that has grabbed the entrepreneur.

The corporate popups are a development which could prove particularly lucrative for Hummus Bros, and came about through an interesting turn of events. When an employee of Goldman Sachs was relocated to a different office, and unable to get his daily chickpea fix from Hummus Bros, he bagged the business a meeting with the catering head at his employer. And, rather than seeing staff troop out of the office to join a queue with other bankers discussing potentially sensitive information, they were open to bringing Hummus Bros in house.

“The benefit is that, for employers like JP Morgan, they get a brand which normally they would not be able to, bringing in healthier and different food.

“As an employer they are happy as workers are less likely to leave the building. We haven’t seen any others doing this, and it’s a great way to gain access to a new group of customers.”

Now, alongside Goldman Sachs and JP Morgan, the likes of British Airways, HSBC, Google, UBS and Bank of America are allowing Hummus Bros to serve up food for staff.

Alongside the new fundraising effort, Mouysset and Givon are beefing up the executive team. The former COO of Patisserie Valerie was hired in February, bringing with them a “decade of experience in the industry”.

“We need to be bringing in experts to help, whether that is a COO or someone to help with HR or marketing,” he explained. “Up until now it was been run like a small business, but we now need to strengthen the board.”

The biggest challenge Mouysset believes he’ll encounter is staffing. Hiring the right people and keeping them true to the brand is important to him, with consistency of food and customer service set to become more problematic as more sites open.

We finish by moving onto new business opportunities and discovered that Hummus Bros released a cook book back in the summer, getting a “great reaction” from customers. An interesting future revenue stream involves building the brand image to roll out products. Making the interesting observation that most of the hummus market is populated by own-brand options, Mouysset feels the business can make that step and get into supermarkets – providing an option to those “pumped full of preservatives”.

With 80 tonnes of hummus produced during 2014, and 150 tonnes being targeted in 2015, it’s fair to say that Mouysset and his team think they’ve settled on a simple recipe which will lead to sustainable business growth.