Given that three fifths of us weren’t aware of any new launches over the past 12 months, it’s become more crucial than ever to deliver a take-off that resonates. That said, we rounded up the best product launches of 2017.

Innovation is one factor the best product launches had in common; a buzzword swan-diving from the tongues of anyone and everyone, it’s been slightly sullied due to its overuse. However, some strategies have genuinely changed the game.

High street fashion retailer Missguided is one such brand, having launched its Babe Power fragrance back in May. Costing £25 a bottle, it became the best-selling fragrance of 2017. Its launch reached beyond traditional marketing, using a hashtag campaign to bolster its blogger-heavy launch party. It’s miles away from celeb-fronted perfume ads and all the better for it.

Rihanna’s Fenty Beauty makes the best product launches list for bucking the trend too. The Barbadian superstar turned up to the launch of her makeup range by applying it to lucky fans. She’s not a brand ambassador; she is Fenty, and that’s what made this launch such a triumph in an age of celebrities slapping their names on whisky bottles and running with the money.

Moving towards a different sort of beauty altogether, the Nintendo Switch worked its magic by being the Nintendo we wanted it to be. It wormed its way into our hyperconnected, on-the-move lives with its simple “take me literally anywhere” concept. If you don’t have time to play games after your wearisome commute home, then no bother.

Thanks to its unbelievably smooth, portable capabilities, you already played your Switch on the way in. By assimilating our hectic lifestyles, Nintendo swung back with a level of invention not seen since the Wii.

An extra mention must be extended Tesla’s way as well. Not only is the automaker behemoth cracking on with revolutionising travel – and maybe shooting cars into space – it’s doing so in a fascinating manner. The launch of its new Semi truck was actually just a pretence, its new Roadster stealing the show right at the very end, unannounced. The fact that this was kept under wraps in 2017 is commendable, and its big reveal from the back of the Semi is something every brand should take note of.

Nostalgia also played a large part in 2017’s best product launches. Crash Bandicoot: N. Sane Trilogy was essentially a reboot of a 20-year-old game series. Remastered with a modest teasing pre-launch, it became the best-selling platform-exclusive game of 2017. Not bad for an orange fuzzball who hasn’t changed his jeans for two decades.

Using familiar themes to launch new products, like Topshop’s recent Stranger Things clothing line,
is another way of not just selling but repackaging nostalgia. This tactic took the warm, ‘80s memories Stranger Things evokes and applied it to launch something fresh, something rooted in the past while still looking forward – much like Stranger Things itself.

That said, it would be crass to exclude the IT movie remake and the terrifying promo campaign. That iconography is classic –  it’s up there with Freddy Krueger’s jumper and Jack Nicholson’s face poking through a door. When that balloon appeared above gutters and circulated across social media, it evoked chills among those of us who remember it from the first time round, but also piqued the curiosity of people unaware of Stephen King’s masterwork.

Hard graft was another factor that placed some launches head and shoulders above the rest. Whatever you think of Apple’s latest batch, you can’t deny the work put in to establish the fanbase, the devotion and desire for the brand. Groundbreaking or not, the teasing, the leaking and inevitable keynote event brought everything to a crescendo. But without solid foundations, without the brand-building, the Apple juggernaut behind the launch – forget it.

And finally… it’s got to be McDonald’s launching home delivery, hasn’t it? It was only a matter of time, and we’ve finally reached utopia. So as 2017 sloped off into a pool of so-called snow and Christmas ads of varying quality, this year’s got a lot to live up to. Raise your glass and/or hamburger, and look forward to the next 12 months of launches.

James Roles is sales and marketing director at Five by Five

Do you plan to rub shoulders with scale-ups in 2018? 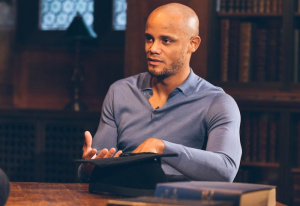 Manchester City captain earns MBA, claiming to be an “entrepreneur at the core”