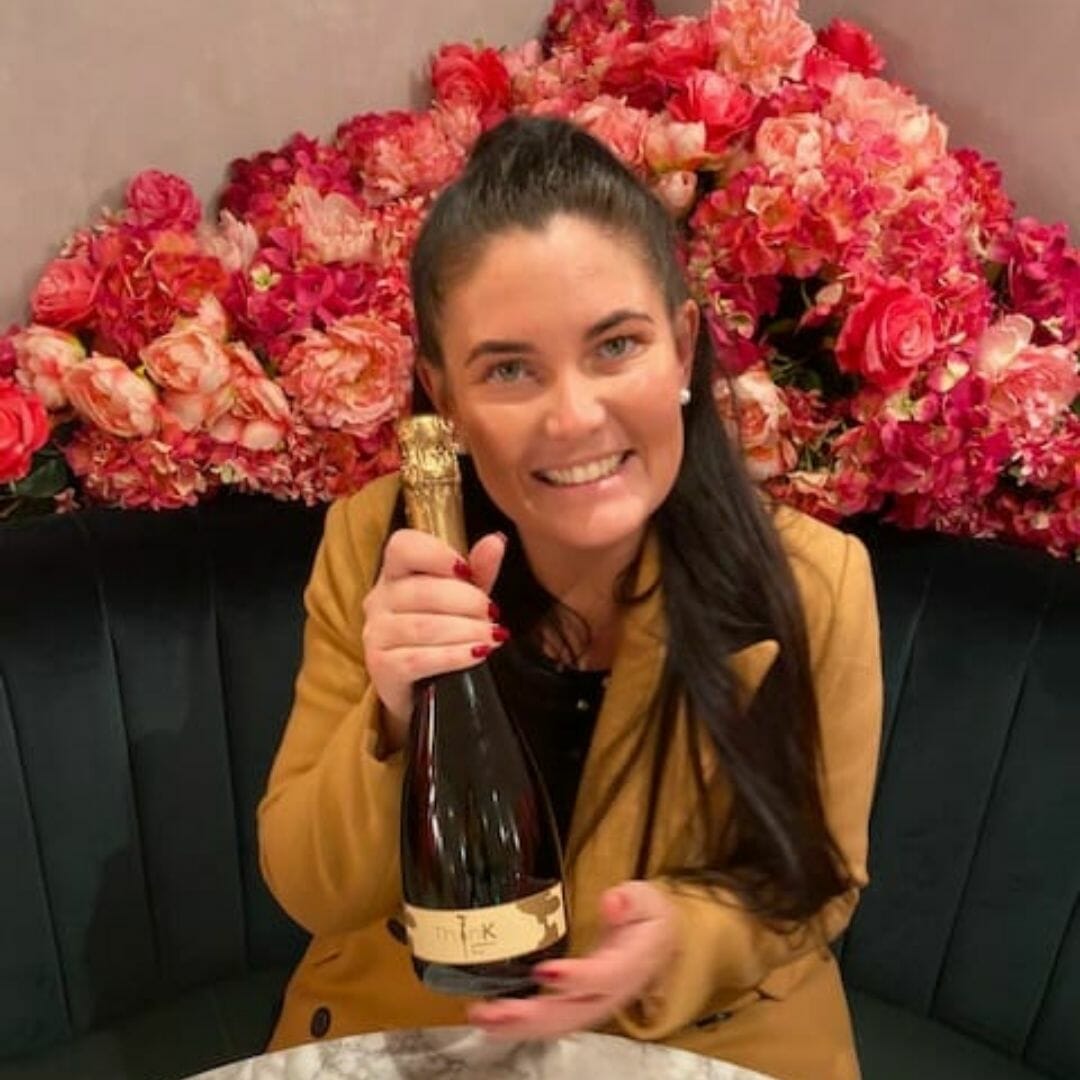 Share via
Katherine Jones was one of the beautiful people mingling in bars and restaurants around Liverpool and Cheshire, drinking Prosecco and champagne cocktails, with her reality TV star clients, snapping pictures and creating a buzz on social media. As owner of We are Social Nation, an Influencer Marketing Agency, Kath was out most nights. Despite having little time for the luxury of eating, she was gaining weight. Over a series of weeks, she watched her habits but saw little change in her weight. With nothing else left to blame she cut back on the amount of Prosecco she was drinking. And that’s when everything changed. Shocked by how much damage a glass of Prosecco could do, she turned her attention to solving the problem. Cutting back was fine, but she loved Prosecco, as did her friends and clients. She couldn’t be alone; the weight gain from a light excess of drinks in a week must affect all women, and men.

The struggle is real

Pleased to have worked out the problem, Kath began talking to all the women she knew about creating a Prosecco reduced in sugar and calories. It would deliver all the taste and alcohol to provide the warm Prosecco buzz, minus the weight gain.

“The more I spoke to people about it, the more I knew I was onto something. Everyone was like, “Oh, my God, yes!” There was no way I could let it lie.”

With strong feedback for her idea, ThinK Wine Group was an idea Kath Jones couldn’t drop. She simply had to find a way to make it a reality. Determined to lose the weight she’d gained, Kath booked herself into a weight loss bootcamp, which turned out to be a pivotal decision. Thrown into a brutal regime of hard exercise and minuscule meals, she bonded with the other women at the camp. One evening she found herself chatting with a woman from London.

“She’s an investment banker from London, and I’m an influencer marketer from Liverpool. Our paths would never usually have crossed.”

“Wouldn’t you just kill for a glass of wine right now?” the woman asked Kath with a smile as they sipped half-heartedly at their sparkling water. “Funny you should say that…” Kath explained her idea. Kath’s new friend from London listened intently. Unsurprised to hear about the positive feedback Kath had already received, she told her she should do it, asking only, “Can you afford to?” Kath explained that she had some money of her own but hadn’t had the time or the faith to make a firm decision. The woman – an investment banker who knew how to recognise a good idea – didn’t hesitate to offer financial backing to make it happen. Deprived of alcohol for several days, the two women knew they were onto a winner. Clinking their glasses of water and shaking on the deal, they quickly got to work. Two years later, ThinK Wine Group was launched. 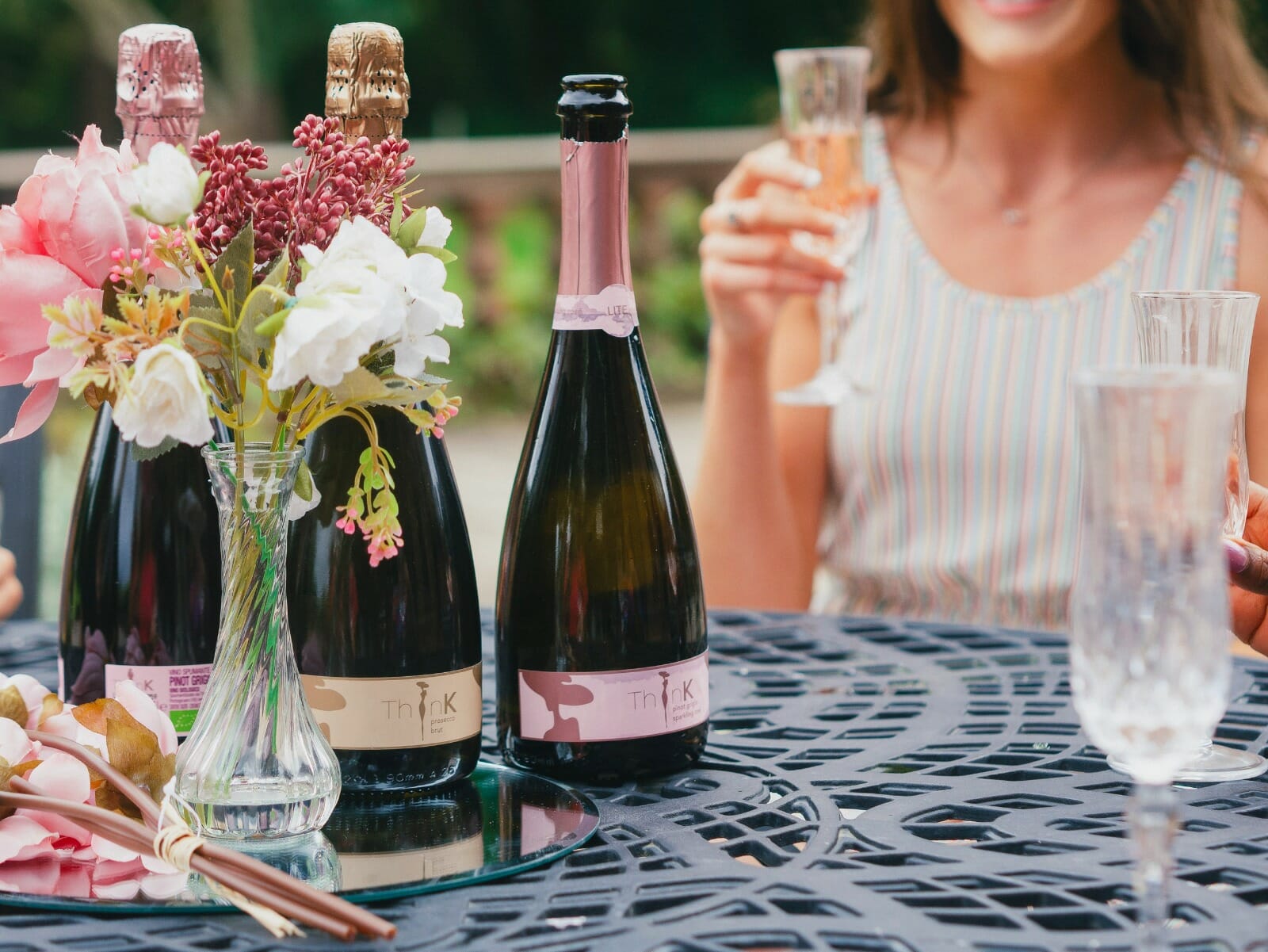 The first, and hardest, job was finding the right Prosecco. Every few weeks Kath and her investor friend would fly over to Italy for the weekend and visit wineries. They visited a total of 50 wineries in six hectic trips before Kath found “the one”. The taste had to be so amazing that when she reduced the sugar, she wouldn’t damage the end flavour of the drink.

“I wanted to make sure that people would enjoy the drink just as much as any other drink, even though it had all the health benefits, which is why it took me nearly two years to create.”

The science behind ThinK

During Prosecco production, there is a moment in time when the product has zero sugar content. Most Prosecco blends add sugar in the final stages of winemaking to make their wines more palatable, this is called the ?dosage?. Kath wanted the grapes to do the singing and add significantly less to the final blend. This is how ThinK creates an enjoyable, cleaner, fresher and more delicious sparkling wine. But she didn’t stop there. The clarification process causes many wines not to be vegan friendly as they are often clarified using animal products, anything from fish innards and animal proteins to egg whites. Kath uses a protein extracted from green peas, making ThinK Wine 100% plant-based. ThinK Prosecco delivers an ?intense bouquet with light notes of green apple and citrus?, and tastes ?fresh, aromatic and elegant?. Her range also includes a Pinot Grigio Sparkling Ros?. ThinK Pink delivers a refined bouquet ?characterised by delicate hints of strawberry, gooseberries and pink grapefruit?.

Launching an alcohol brand isn’t without its difficulties. Before Kath could sell a single bottle of ThinK Wine, she had to pass tests (literally) and jump through multiple official hoops to get the required licenses.

“You’ve got to go to classes. Then you’ve got to take a test, then there’s your premises license which you have to get through the council, and the worst bit was a three-hour interview with HMRC.”

One such test was a three-hour long interview with HMRC, where Kath was grilled on her tax history. The gruelling interview had a lot riding on it. The experience was incredibly stressful. Fortunately, she got a resounding pass and a green light the same week. She celebrated with friends, and more than one bottle of full-fat Prosecco.

ThinK Wine launched with a double-pronged approach – hospitality sales and online. Online sales ticked along at a relatively low level as Kath perfected her marketing message. She spent the majority of her time pounding the pavements, knocking on doors and selling face-to-face in bars, restaurants and hotels in Liverpool and Manchester, many of which knew her from her influencer marketing agency. Things were going well. She was gaining attention from the bars and restaurants. She’d signed with two large distributors and was even on the verge of getting ThinK stocked in the corporate box at a major football club.

“We started off and had an online presence and with the store online, but we didn’t put much effort in. We were running around speaking to bars, restaurants, hotels and then coronavirus hit.”

Then, six months after launching, coronavirus arrived in the UK and forced a nationwide lockdown. The football deal is still on indefinite hold and Kath is working hard to stay fresh in the hospitality industry’s mind while remaining sensitive to their ongoing struggles. Online sales, however, are roaring. Available nationwide, the strongest sales are in Liverpool, Kath’s hometown, but London, Manchester and Birmingham are fast catching up to the new trend.

“We changed our business model completely, put all the effort into online, started using all of our influencers, started throwing money at Facebook ads, and we just turned it around.”

The breakthrough for online sales came in the middle of lockdown when influencer Luisa Zissman enjoyed a sunny afternoon in her back garden, with her mum and a bottle of ThinK Prosecco. Zissman?s Instagram post triggered an incredible ?7,000 worth of sales in a single day.

Happy National Prosecco day ? You know I love a good tipple so I?ve teamed up with my favourite prosecco brand @thinkwinegroup to give away one of their mixed cases (pink is my fave!) just be sure you?re following @thinkwinegroup and tag a friend below I?ll announce the winner and get you the wine sent out tomorrow ? #spon

ThinK Wine have grown their social following from around 5,000 pre-lockdown to 13,000 loyal followers, and the numbers keep climbing. The brand has now launched in Ireland and in 2021 ThinK Wines will expand into Australia and the USA. Kath will be out in the States next year filming for Amazon Prime and is planning to take full advantage of the opportunity by doing some face-to-face selling in LA. When Amazon producers approached her to star in “Four Days to Change the World”, a new reality show which gives CEOs four days to change the world through philanthropy, Kath?s answer was a resounding “Hell, yes!” thinkwinegroup.co.uk