Similarly, 36 per cent of social media users would let brands do the same for every photo they posted online, whilst 39 per cent would be most willing to appear in their favourite brands’ television advert.

The findings come from online marketplace OnBuy.com, which analysed YouGov survey data from 2,000 people to better understand how consumers might let brands sponsor them.

Some 37 per cent of respondents claimed they’d be prepared to wear a t-shirt or top with a large image of a brand’s logo emblazoned across it every day for a whole month. Meanwhile, 19 per cent of people admitted they’d wear the same top every day for one year.

However, there appeared to be a limit on how far most consumers would go to advertise their favourite brands. The research showed that just three per cent of Brits would change their first name to a brand’s name, while five per cent said they’d get a brand’s logo tattooed on their body.

The study comes during a period of rapid evolution in the way people engage with brands they like. With the help of the internet and social media, companies have been able to create highly personalised interactions with consumers via a growing number of online channels.

As a result, brands are able now more than ever to “harvest” a loyal following of customers who’re more likely to follow their every action online and become the first adopters of new products.

“These sorts of arrangements work best when a company collaborates with influencers who are the most relevant to their industry, as that’s when it really feels mutual and authentic,” she added.

“I managed to gather a large following, [which] is when a well-established brand proposed to me some sponsorship possibilities. Since I admired their design and innovation, I decided I would be happy to regularly wear their clothing and then, visually post it on my blog and social media channels to promote the brand. So far it’s been very fruitful.”

Commenting on the results of the survey, OnBuy.com managing director Cas Paton said it provided further evidence that brands and consumers had become more “intertwined” in the so-called “digital age”.

Paton added: “What this research highlights is that there are certain sponsorship avenues which British consumers would be less inclined to accept and entertain when displaying their affection and endorsement for a brand.

“Companies have been better able to gain an insight into those who truly represent as well as support them. Consequently, this has allowed them to identify and approach certain consumers to become ambassadors [and] advocates for the brand. 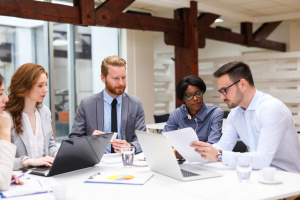 How to keep your HR and finance departments in check