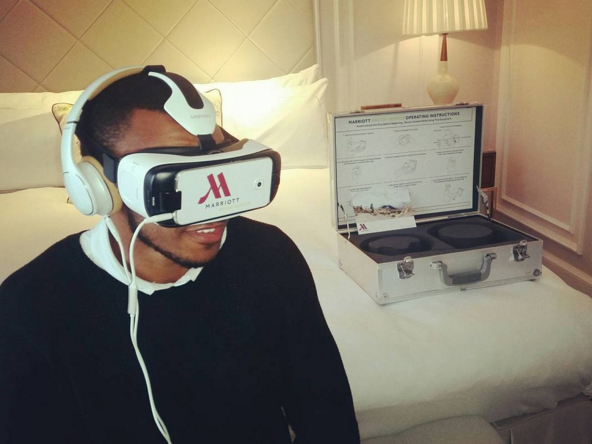 Share via
It’s understandable to feel as though virtual reality will only be promoted from tech giants out to the tech-obsessed and early adopters of rising platforms. Indeed, the biggest tech-loving fanboy of all, Mark Zuckerberg, has been eagerly touting VR for some time. This crusade reached fever pitch with the arrival of Mobile World Congress 2016, where he has giddily sung the praises of the digital platform. He had a wild smile on his face as he strolled through the hall full of mobile executives to the main stage, but his security detail wasn’t required – the entire crowd was blissfully ignorant of their saviour’s presence, captivated by the VR headsets he was about to promote. You’ll recall that Facebook bought VR firm Oculus for $2bn back in March 2014 – two years later we’re now seeing major headway as Zuckerberg supported Samsung’s launch of its new Galaxy S7 smartphone. Samsung’s Gear VR headset is powered by Oculus – as such, in a mutually beneficial marketing ploy, each pre-order of the S7 and S7 Edge will come with a free Gear VR. The new smartphones, and a number of existing models, slot into the headset and provide the user with access to VR videos and games. Meanwhile, those who choose not to pre-order can buy a device for $99, which “means Gear VR will be in the hands of millions of people this year”, according to Zuckerberg.

Explaining the importance of VR, he added: “Here’s a new stat: people have already watched more than one million hours of 360 videos in Gear VR. I’m looking forward to seeing even more great content as VR continues to grow!” He pointed to the power of VR as he said the experiences headsets can provide will take people to new destinations, from Tahiti to Mars. However, it’s this very point about exploration that industries outside of the tech bubble should swallow. In fact, I found first hand that 90 year-old hospitality giant Marriott, of all companies, has been keen to embrace VR. Using none other than the Gear VR, Marriott introduced VRoom Service, a feature designed to provide guests with access to new territories from the comfort of their hotel rooms. During an interview, Karen Olivares, Marriott’s senior director of brand marketing, told us: “At first blush, people wonder, ‘why VR and Marriott? They have nothing to do with each other’. But if you stop and think about it, there is quite a bit in common. Hotel brands are in the business of offering their guests sensory experiences, and different brands offer different experiences based on property and positioning. VR is all about an enhanced experience.” It may come as a surprise to find that said enhanced experiences are also being sought across industries including, construction, retail, medical and education too, making it clear that VR isn’t necessarily an entertainment gimmick to be swept under the carpet and ignored.

John Lewis and Crossrail were among the organisations that took part in a £210,000 search for British VR and AR innovators with respective views of connecting in-store and online retail and improving safety and quality. Royal London Hospital, meanwhile, sought to find a way of helping patients observe treatment methods with VR as a visual aid. All of this highlights that there is a very real make or break scenario presented before businesses right now. Indeed, SMEs have admitted they are being held back from spending money on R&D because they lack innovative skills, Lloyds Bank revealed. Global researcher TrendForce came out and said that the value of the VR market, inclusive of software and hardware, will amount to $6.7bn in 2016. However, that sum will surge rapidly to reach $70bn in 2020. We’ve all seen companies get burnt by ignoring the rise of online shopping, mobile sites and apps, contactless payments and so forth – with VR still in relative infancy, business leaders should certainly keep their eyes on developments, even if it isn’t immediately clear how VR can be embraced initially. Should you find you’re really lacking inspiration, perhaps a corporate visit to Alton Towers will help. The theme park is opening Galactica, the world’s first rollercoaster entirely customised for VR, Alton Towers new ride opens in April 2016.

Virtual reality isn’t the only industry Facebook boss Zuckerberg hopes to disrupt this year – he plans to create AI technology similar to that found in Marvel’s Iron Man films.