Essex has always had a certain reputation and TV show TOWIE has achieved a solid following by supercharging the stereotype associated with the home county.

High heels, girls covered in make-up and small dogs combined with gym-obsessed guys who love nothing more than partying and buying fast cars is what life is like in Essex, where everyone is wealthy – at least so TOWIE would have you believe.

It’s a different story for cast member Tommy Mallet (Fordham on his birth certificate), however, who was born in London’s Islington. He moved to Essex in his teen years and lived in a council flat, which he’s proud to say as it dispels suggestions he’s lived off family money, when the 2010-launched show was just getting started.

Although he began doing architecture at college, he admitted that his dyslexia made it difficult to pursue. Fast forward to September 2014 and the time was right for Mallet, who had moved into carpentry and site management, to join the show.

His introduction to TOWIE was as a wild party animal, which explains his first foray into entrepreneurship as a part-owner of Romford night club Circuit in December that same year.

“We sold it last year. In the club business, it’s hard and there’s only so much you can do. You’re dealing with weekends that are busy one minute and quiet the next, so it’s not stable,” he told Real Business in an interview.

That dalliance with ownership sparked something for Mallet and just six months after getting involved with Circuit he moved into fashion with Mallet Footwear – a brand that has expanded globally, despite initial setbacks.

“It started in June 2015. I was doing a modelling shoot and I loved the shoes they gave me to wear, but they were £1,200 – I’d just started on the show and didn’t have much money,” he recalled.

“I did a drawing and messaged it to a friend who worked in fashion and asked if he knew anywhere that could make it. Two weeks later he came to me with a sample. I thought wow, this is a good, let’s see if we can sell a few online and make a small business out of it.

“By January 2016, we were earning money and learning. Now we’ve been going nearly two years and are in most good stores in the UK with premium brands. It’s such a crazy thing, because I never expected it to be where it is.”

The friends became business partners and went in 50/50 with their personal funds, achieving a total of £40,000. Mallet had secured his cash from personal appearances, something he has been keen to distance himself from since, and “lived broke” to save up.

With Mallet Footwear, his vision was to create a premium shoe at affordable prices. He admitted and understands that, at a price point of £165-£185, most people will still consider the brand expensive.

Of course, by comparison to the £1,200 pair of shoes that inspired him they’re positively cheap. Especially when you consider the production values – from the packaging to the care kits included, as well as the top leathers and soles from Italy.

Not everyone was enthusiastic though. “I remember the first few months of launching. People were writing on Twitter and Instagram saying, ‘this guy is just from reality TV why does he think he can make a shoe company and people are going to buy at these prices?’”

A fortuitous bit of outreach from will.i.am’s stylist gave the brand some recognition and changed people’s perceptions. It came to light that Mallet Footwear was being accepted by fashionistas who ordinarily wear the likes of Gucci, Valentino and Louis Vuitton.

“I got contacted by a stylist for will.i.am and that gave us some oomph – people realised we weren’t playing games. But I would say the time we became a real business with money behind us was August last year when we started doing well in shops,” said Mallet.

“For example, that month we launched at Choice in Westfield and we’ve been the bestseller in there since.”

Mallet isn’t just the face of the business though, he’s been the creative mind designing the shoes from the start, something he took away from his architecture study. Only recently did he collaborate with another designer for a new collection.

That collaboration made it clear that self-taught Mallet works differently to other designers, having not attended the same fashion schools – a USP he’s proud of.

Emphasising his passion for the business and the company’s capability, he added: “I once stayed up for three days straight designing a whole new collection. I designed them on a Friday, had them the next Friday and they were online two weeks later. In fashion, not many people can do that – it isn’t a fast-moving industry.”

Filming TOWIE does eat into five to six days a week, Mallet revealed, but it’s all about management – something he’s gotten used to as an entrepreneur. With Wednesdays and Sundays the long shifts, weekdays are generally only two-three hour-long shoots.

“You get used to it and it’s all about balance. I’ve always got my phone, laptop and sketchbook and sit there working whenever I can. It’s a lifestyle for me,” Mallet detailed.

“I’m on a show, but I’ve done everything myself. When I first started TOWIE, instead of going down the route of being a reality TV star and doing posts for other people’s companies and getting paid for it, I thought I’ll start my own one off.”

The trend of reality TV stars making posts on behalf of other companies is commonplace – and it doesn’t always work well. Kardashians star Scott Disick previously made a huge blunder that gave insight into the way that system works, so it’s not surprising Mallet is keen to forge his own path beyond TOWIE.

Making his own way hasn’t just paid off in monetary terms either, but also in terms of industry respect and recognition too.

“I don’t need to answer to anyone. We had offers in December and January, very big companies offering to buy stakes. Having a big substantial amount would be very good, but that takes away the fun of me having the company,” he said, refusing the offers and preferring to stay independent.

A move he was adamant about was keeping his name off the shoes too, with the Mallet branding only featured inside.

“People knew my name, so that’s why I never put the branding on the shoes, just inside. It’s about the design. I had to change my appearance completely – I couldn’t be getting papped and I don’t go out drinking. I sacrificed things – I could have done sponsored Instagram posts, but if I do that then I’m the same as everyone else,” he explained.

In addition to London and Essex, Mallet Footwear can be found in stores across the UK in locations such as Manchester, Liverpool, Birmingham, Glasgow, Edinburgh and Portsmouth.

Outside of the UK, Holland is a market that Mallet seems to have cracked now despite a slow start. “Amsterdam is big for shoes. I got a flight over there with my partner with a case of shoes and went into different stores, but we weren’t getting anywhere,” he said.

“But then we went to one store about 30 minutes outside of Amsterdam, which had Gucci and every good brand you can think of. They stocked us on Friday and by Monday they sold out. We’re in 16 stores in Amsterdam now.”

Paris is another city the brand has moved into, while there is potential to move into Australia, Los Angeles and New York.

“As a businessman, if I wanted to be rich and do it I could. But this is a passion for me. So, doing it in smaller pieces and selling a lot in the right places is better because I can keep control,” he said.

“We’ll push all in good time, but there’s a lot more to learn before, and I want to be there building those relationships.”

Outside of footwear, Mallet has also struck up a partnership with Belvoir sunglasses to develop his own line. The company sent Mallet some glasses and discussed sponsored posts, but he had other ideas and they teamed up to create a range that sold out within a fortnight.

Elsewhere he did have another business, which he decided to shutter. Mal Groom was a men’s hair product that could be bought in select barbers, but it took hundred bottles to be sold to get near the money made from selling two pairs of trainers.

On one episode of TOWIE, Mallet went to a school and spoke to GCSE students to offer some words of wisdom, having struggled during study himself. That’s since inspired him to introduce a series of business seminars across the UK, as he finds himself inundated with messages from aspiring entrepreneurs on a regular basis.

“I get so many messages from people asking for advice, about 200 a day, so I can’t message everyone back, though I wish I could,” he said.

Take a little note of this..

Sales are currently in the thousands as it stands, and with further growth potential in the UK and overseas, Mallet Footwear only looks set for further scale – and money isn’t the motivator.

Closing with a teaser of what we can expect from his seminars, Mallet said: “It’s not all about the money. It’s really not. If a businessperson said that to me ten years ago, I’d have told them to shut up. But being successful in what you’re doing overrides everything – money is a bonus.

“Me walking down the street in Amsterdam seeing a geezer with my shoes on is a lot better than someone giving me money. Money was everything for me and now it’s at the bottom of the list, it comes when it comes.

“All of that fine dining and who’s got the biggest watch doesn’t appeal to me. You can get things on rent now – all that stuff is an illusion. Seeing yourself and someone telling you how well you’ve done for yourself is better than any money in the world. You can’t buy that, can you?” 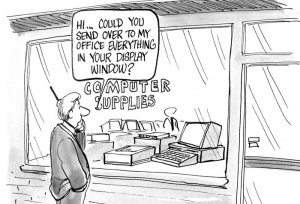