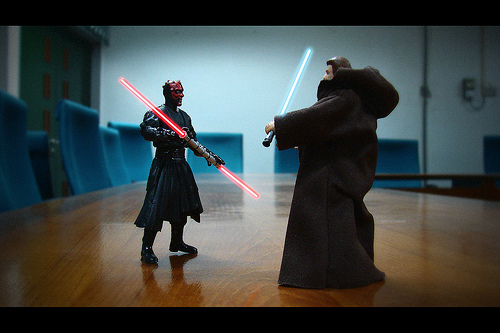 Share via
Workplace conflicts are almost inevitable. Maybe you’ve just fallen victim to poor communication from your fellow colleagues or been distracted by their inappropriate work wear. Disagreements at work can be something small, or something major, but it’s important to understand what the causes of conflict are in order to get past them.

These are the top ten causes of workplace conflict:

A fellow employee who fails to deliver vital information across an organisation is a big problem and can cause plenty of problems. Good communication is key when it comes to working in a team. If someone doesn’t communicate well, or fails to send the right message, people will start to get annoyed at their incompetence. Be clear, concise and make sure you keep to the point when passing on information and you’ll be fine.

They know everything there is to know about everyone, and seem to be best of friends with each and every person in the office. They’re overly nice, but always seem to have the latest gossip. Talking about your colleagues behind their back, no matter how annoying they might be, is a disaster waiting to happen and is one of the biggest causes of office conflict. If you’re not impressed with the way a colleague is behaving tell them you don’t want to get caught up in other people’s business. As a general rule, it’s best to stay out of the politics.

The nature of a workplace means you’re thrown into the deep end with people who you might not otherwise choose to socialise with. There will always be some sort of disagreement on matters in the office because everyone has their own view, and it would be a very dull place if everyone thought the same. Knowing when to hold back your opinion is key.

A slacker’s desk is covered in dust and they pull one too many sickies for it to be believable anymore. Or, maybe they’re the one whose lunch hour turns into the whole afternoon. Whichever one, it’s never nice to feel like you’re doing all the work. This is one of the biggest complaints when it comes to conflict in the workplace.

There’s always someone in the office who seems to want to do everything better than everyone else. Maybe they’re after a promotion, or maybe they just want to prove that they’re the best. Either way, a colleague’s constant campaigns to outdo everyone in their path can be both undermining and aggravating. It’s best to try and focus your efforts on your own work instead of worrying about other people. If you’re doing the best you can do, your efforts won’t go unnoticed.

Flirting between two employees can be both annoying and uncomfortable. Therefore it is important to recognize that if love does blossom in the office it should stay outside of work. If you’re in an office whirlwind romance yourself it’s also important to make a conscious effort to treat all your colleagues the same. On the other hand, if you’ve found yourself sitting in the middle of shameless ping-pong of bad flirting, speak up. It’ll soon open the lovebirds’ eyes to the awkwardness it’s causing everyone else.

There are rules around when you can take your holiday due to other people booking time off first. There’s always going to be a popular period to go on holiday, particularly if you have children, and it’s important to recognise that everyone in the office is just as much entitled to it as you are. If there is a specific time that you desperately want off, make sure you book it up ASAP to avoid disappointment and quarrelling with colleagues.

There’s always that one co-worker who is a little bit too chummy with the boss. Every office has someone who brazenly sucks-up for a promotion, and it’s difficult not to be annoyed when they get what they want. The key to combating conflict with a colleague like this is to avoid getting embroiled in their business. Maybe they actually deserved that raise. Resist the urge to chat with work allies around the water cooler and instead focus on doing your job to the best of your ability.

This is a colleague who treats every day as an opportunity to impress with a series of short skirts or low-cut tops. Or, if they’re male, they turn up with one too many buttons undone. Appropriate workplace dress is extremely important as it helps employees respect each other. Also, if you’re meeting clients or business partners it is imperative that you make a good impression. If you have a colleague who isn’t projecting professionalism in what they wear it’s vital to take action. It sets a bad example and can cause conflict between those who make the effort day-in-day-out.

10. Not doing the washing-up

It’s hard to believe that this is one of the top ten causes of work conflict, but there always seems to be one employee who doesn’t do their fair share. It’s unfair to assume that only the most junior of staff should hold the tea and coffee duty, and it’s important to make sure you take it in turns. Try drawing up a rota, which will ensure everyone knows where they stand and does their fair share. Failing that, invest in a dishwasher.

What can you do to prevent conflict at work?